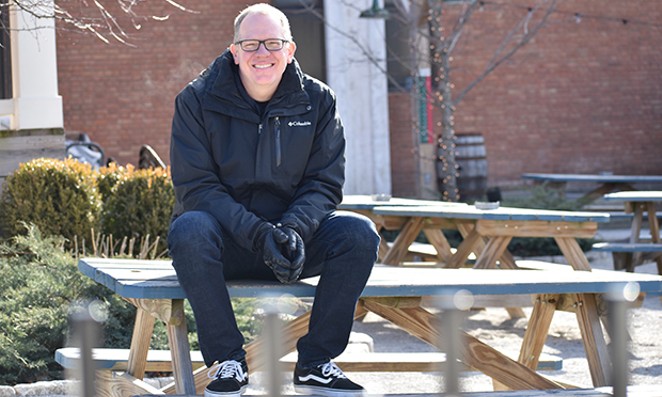 Photo by Lindsey Salvatelli
Rev. Paul Hemenway has reconnected with the original members of Black Happy to record an album in March.

Rev. Paul Hemenway is all about authenticity, and his career even before devoting his life to God and his ministry was about throwing out labels and being yourself. Hemenway isn’t just the senior pastor at Trinity Lutheran Church in Springfield, he’s a musician whose influences range from the pioneers of metal music, Black Sabbath, to punk rock favorite Fishbone.

Hemenway said some of the principles he found in the music scene are similar to those of his faith.

“I look at taking care of what’s around us and say, ‘That’s Jesus,’” Hemenway said. “I look at all of these things that are for the brotherhood of man, as John Lennon said, as being rooted in the teachings of Christ, even when it costs you everything. So to me, punk rock is a reflection of that.”

Hemenway is the son of a Lutheran pastor who wasn’t always pleased with his initial career choice. Hemenway said he didn’t want to follow his father’s work, so when he got his first guitar at the age of 14, he made it his mission to reach rock star status.

As a guitarist in Black Happy, an eight-piece band that Hemenway described as a cross between Black Sabbath and James Brown, he created a following of fans that spanned along the West Coast and into the Pacific Northwest.

Hemenway’s dedication to landing a record deal went beyond playing shows and gaining a following. At one point, he faked being a reporter so he could interview the president of Sub Pop Records, the record label that signed Nirvana and Soundgarden, about how bands could land record deals. 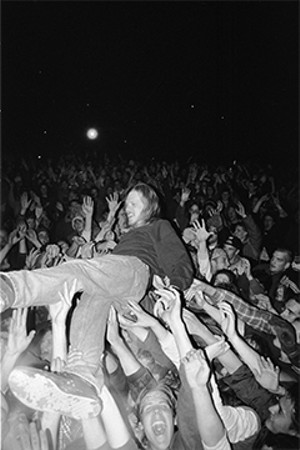 Photo By Darren Balch
Hemenway crowd surfs during a performance in 1994.
“I told him I was doing this story, and it was all questions about how a band gets signed to Sub Pop,” Hemenway said. “He told us, but we never got signed by him.”

The band lasted from 1990 to 1995 and produced two records during that time, but it wasn’t the label he thought he needed to be on to arrive at the rock star status he wanted. He and three members of Black Happy then formed another band that was signed to a major record label, which is how Hemenway spent the rest of the 1990s. However, the changing music scene soon became riddled with drug use, leaving him wondering what he could do to save his friends from addiction and death.

“There was a time the Northwest music scene was really fun, and then it wasn’t,” Hemenway said. “It got real.”

Even though he had achieved success as a musician, Hemenway said he still felt he wanted to help others, a calling that grew in intensity during the late 1990s. He considered teaching history and then thought about a career helping low-income people as a dentist, but nothing seemed to satisfy the urges he was experiencing.

“If you believe in that kind of thing, it was a six-year battle between the Lord and me, and I finally just gave up fighting and said, ‘OK, I’ll try.’”

In 2002, Hemenway finally went to Concordia Seminary in St. Louis where he found the peace he had been seeking. He graduated in 2007 and worked in the St. Louis area before accepting his current position at Trinity Lutheran in January of 2013.

He took his time at seminary seriously and put aside music for awhile, plus, the rock star status had taken its toll on Hemenway.

“There were a couple of years after we broke up that I was just so fried,” Hemenway said. “So, in 2000, I put down my guitar for a number of years.”

However, much like the calling Hemenway felt to leave the life of a musician for seminary, he was eventually drawn to play music again. Hemenway reunited with members of Black Happy in 2010 and plans to go back into the recording studio this March. The group just finished a Pacific Northwest mini-tour in 2018 where the band brought along their families.

“We never thought Black Happy would reunite or anything would happen with the band,” said Hemenway’s wife, Karen. “It’s exciting. It’s fun to see the guys back together, and it’s kind of a family affair.”

Even though his life has taken a different form than being a rock star, Hemenway said not much about his relationship with his bandmates has changed. Plus, he said, another band member also went to seminary, although he ultimately didn’t take the final step to become a pastor.

“We still have fun together, we still joke around, we still do stupid practical jokes on each other,” Hemenway said. “But I like to think I’m a lot nicer now.”

Music is still a big part of Hemenway’s life, and like any good music connoisseur, he has introduced his children and wife to different artists who have influenced him over the years, such as The Beatles, Elvis and Radiohead.

Hemenway said when he first met Karen she wasn’t as enthusiastic about music. However, Karen said he’s introduced her to something they both can enjoy, which is why the couple plans to spend their anniversary this May seeing The Hives play at Karen’s favorite venue in St. Louis.

“In a high school yearbook, if they listed least likely to marry a punk rock pastor, I’d win that one,” Karen said.