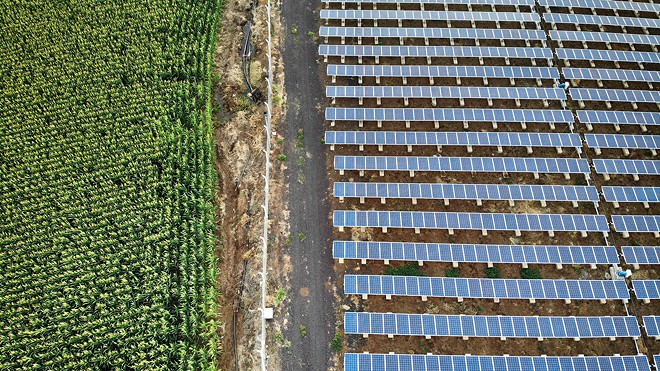 Sangamon County is among the nation’s top 50 corn/soybean production counties. Can solar farms be sited on more marginal lands?

The renewable energy boom is either a boon to some or a boondoggle to others. The billions of dollars being spent on renewable energy today is causing disruptions throughout the ag economy that we are still trying to understand.

I'm a trustee for the Sangamon Conservancy Trust, which is a land trust established in 2000 to protect prime farmland in Sangamon and surrounding counties with the use of conservation easements. We recently testified against the siting of two Sangamon County solar farms because of the negative impact on prime farmland and the lack of responsible zoning criteria for industrial-sized projects.

Our board is currently working with the local Farm Bureau and the Sangamon County Board to tweak current zoning requirements to encourage future solar projects to be sited on more marginal lands. We also believe there needs to be a cap on the number of acres devoted to solar projects in our county. Our trust's easement agreements prohibit wind and solar energy projects on acreage we currently have a conservation easement on.

My farm in eastern Sangamon County is located near an operational wind farm and another prospective wind/solar project. I have personally been solicited by energy companies to participate, but I have refused despite lucrative financial offers.

My objections to these projects include:

• Once prime farmland is converted to power production, it likely will never be restored to its original productivity despite promises to do so.

• There is a finite supply of Class A (133+ Productivity Index) farmland available in the Midwest. Renewable energy projects should be sited in less productive areas.

• Fewer acres available for farming will likely increase cash rents and land values for the remaining acres in a county. That means less opportunities are available for young people wanting to enter farming.

Other states are beginning to rethink how to responsibly locate renewable energy projects to minimize adverse impacts to farmland and ranchlands.

The power density of renewable power is one to two orders of magnitude lower than for fossil fuel power, meaning renewable power requires at least 10 times more land area per unit of power produced, according to a report in the Kansas Reflector.

The state of Indiana is working with local farmers in the northwestern part of the state to create a 13,000-acre solar farm that protects farmland. Much of the land has forests and wetlands on them, which all will stay. There also will be a lot of green space for the setbacks from the edge of property lines and farm ditches as well as the area in between panels. Only 2,500 acres will be covered by solar panels.

Here in Sangamon County, we have roughly 531,000 acres of cropland. The county is among the top 50 in corn/soybean production nationally, and in the top six counties in Illinois. The recently approved solar projects will take away at least one to two percent of cropland acreage.

Central Illinois is also known around the world as the "Golden Triangle." The most productive farmland in the U.S. and the world is in a triangle bounded by Springfield, Bloomington and Champaign-Urbana. It remains a vital resource deserving protection from unbridled development.

As we testified during the recent Sangamon County Board meeting, we are not opposed to renewable energy projects in central Illinois. However, we are against placing these projects in areas of prime farmland already being encroached by urban development and electric power distribution lines.

We support any efforts by local leaders to responsibly locate future renewable energy projects in the county, so local residents have reliable electricity and local farmers can produce food for the world.

John Hawkins is a current trustee of the Sangamon Conservancy Trust and a farmowner in Buffalo Hart Township.