The biggest news you never heard about Every year since 1976, Project Censored has performed an invaluable service – shedding light on the most significant news that's somehow not fit to print. Censorship in an authoritarian society is obvious, from a distance, at least. There is a central agent or agency responsible for it and the lines are clearly drawn. That's not the case in the United States, yet some stories rarely, if ever, see the light of day. Stories get buried or ignored – such as violence against Native American women and girls, even though four out of five of them experience violence at some point in their lives, usually at the hands of non-Native perpetrators.

"I wouldn't say that we're more vulnerable," Annita Lucchesi, a Southern Cheyenne descendant and executive director of the Sovereign Bodies Institute, told The Guardian. "I'd say that we're targeted. It's not about us being vulnerable victims, it's about the system being designed to target and marginalize our women."

And, the media erasure of their stories is part of that same system of targeting and marginalization. While journalists everyday work hard to expose injustices, they work within a system where some injustices are so deeply baked in that stories exposing them are rarely told.

That's where Project Censored comes in.

"The primary purpose of Project Censored is to explore and publicize the extent of news censorship in our society by locating stories about significant issues of which the public should be aware, but is not, for a variety of reasons," wrote its founder, Carl Jensen, on its 20th anniversary. Project Censored includes an annual survey conducted by California's Sonoma State University and the Media Freedom Foundation to find the year's most significant overlooked and underreported news stories.

Thus, the list of censored stories that's the centerpiece of its annual book, State of the Free Press 2021, doesn't just help us to see individual stories we might otherwise have missed. It helps us see patterns of censorship.

That's despite a problem of similar dimensions, and complexity, along with the election of the first two Native American congresswomen, Deb Haaland and Sharice Davids, who, Ms. Magazine reported, "are supporting two bills that would address the federal government's failure to track and respond to violence against indigenous women [and] are supported by a mass movement in the U.S. and Canada raising an alarm about missing and murdered indigenous women and girls (MMIWG)."

Four in five Native women experience violence at some time in their lives, according to a 2016 survey by the National Institute of Justice, cited in an August 2019 Think Progress report.

"About nine in 10 Native American rape or sexual-assault victims had assailants who were white or Black," according to a 1999 Justice Department report.

"Although the number of Native Americans murdered or missing in 2016 exceeded 3,000 – roughly the number of people who died during the Sept. 11, 2001, terror attack – the Justice Department's missing persons database logged only 116 cases that year," Think Progress noted. "The sheer scale of the violence against Native women and the abysmal failure by the government to adequately address it, explains why the issue was given such prominence during this week's presidential candidates' forum in Sioux City – the first to focus entirely on Native American issues."

But even that didn't grab media attention.

There are multiple complicating factors in reporting, tracking, investigating and prosecuting, which were explored in coverage by The Guardian and Yes! Magazine, as well as Ms. and Think Progress.

"Campaigners, including the Sovereign Bodies Institute, the Brave Heart Society, and the Urban Indian Health Institute, identify aspects of systemic racism – including the indelible legacies of settler colonialism, issues with law enforcement, a lack of reliable and comprehensive data, and flawed policymaking – as deep-rooted sources of the crisis," Project Censored summed up. "As YES! Magazine reported, tribal communities in the United States often lack jurisdiction to respond to crimes."

Project Censored concluded, "As a result of limited news coverage, the United States is far from a national reckoning on its crisis of missing and murdered Indigenous women and girls."

"More than 18,000 people have filed suit against Monsanto, alleging that exposure to Roundup [weedkiller] caused non-Hodgkin lymphoma, and that Monsanto covered up the risks by manipulating scientific data and silencing critics," the Hill summarized. "The company has lost three high-profile cases in the past year, and Bayer is reportedly offering $8 billion to settle all outstanding claims."

"Monsanto adopted a multipronged strategy to target Carey Gillam, a Reuters journalist who investigated the company's weedkiller," The Guardian reported.

This took place while also targeting Neil Young (who released a 2015 record, The Monsanto Years), and creating a massive, multimillion-dollar spying and disinformation campaign targeting journalists writing about it, as well as scientists and advocates exposing the risks its product posed. Creating a covert army of seemingly neutral allies to attack its critics was central to Monsanto's strategy.

The Guardian's report was based on internal documents (primarily from 2015 to 2017) released during trial. They showed that "Monsanto planned a series of 'actions' to attack a book authored by Gillam prior to its release, including writing 'talking points' for 'third parties' to criticize the book and directing 'industry and farmer customers' on how to post negative reviews."

In addition, Monsanto paid Google to skew search results promoting criticism of Gillam's work on Monsanto, and they discussed strategies for pressuring Reuters with the goal of getting her reassigned. The company "had a 'Carey Gillam Book' spreadsheet, with more than 20 actions dedicated to opposing her book before its publication." They also "wrote a lengthy report about singer Neil Young's anti-Monsanto advocacy, monitoring his impact on social media, and at one point considering 'legal action.'"

"Monsanto has also previously employed shadowy networks of consultants, PR firms, and front groups to spy on and influence reporters," Thacker wrote. "And all of it appears to be part of a pattern at the company of using a variety of tactics to intimidate, mislead and discredit journalists and critics."

"Monsanto's campaign to monitor and discredit journalists and other critics has received almost no corporate news coverage," Project Censored notes. A rare exception was a June 2019 ABC News report which nonetheless "consistently emphasized the perspective of Monsanto and Bayer."

3. U.S. military – a massive, hidden contributor to climate crisis
It's said that an army travels on its stomach, but the Army itself has said, "Fuel is the 'blood of the military,'" as quoted in a study, Hidden carbon costs of the everywhere war, by Oliver Belcher, Patrick Bigger, Ben Neimark and Cara Kennelly, who subsequently summarized their findings for The Conversation in June 2019.

The U.S. military is "one of the largest polluters in history, consuming more liquid fuels and emitting more climate-changing gases than most medium-sized countries," they wrote. If it were a country, it would rank as "the 47th largest emitter of greenhouse gases in the world."

Studies of greenhouse gas emissions usually focus on civilian use, but the U.S. military has a larger carbon footprint than any civilian corporation in the world. 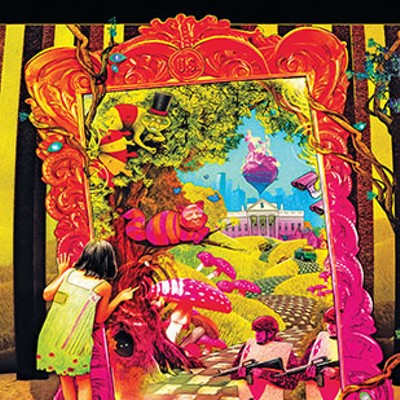