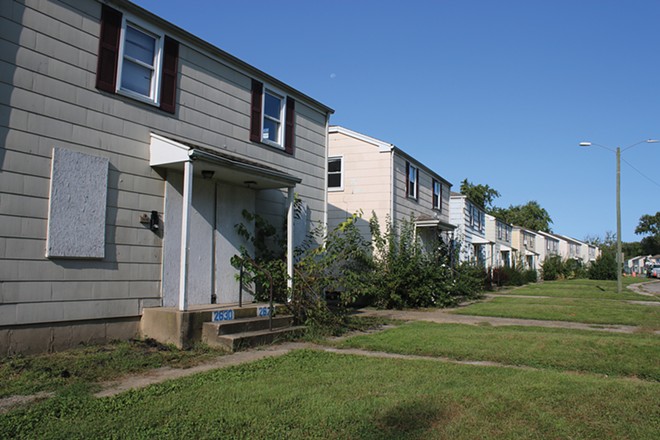 PHOTO BY STACIE LEWIS
Only 15% of the units in Poplar Place are occupied, and the units and roads in the complex are in disrepair. A long-awaited $38 million renovation is slated to begin in January.

A $38 million renovation of the deteriorated Poplar Place private housing development for low- and moderate-income families is scheduled to begin in January and be complete after 18 months.

Chicago-based Related Midwest, owner of the 23-acre site on Springfield's east side, outlined its plans to the City Council recently when it said another $1 million from the city is needed to help pay for the long-delayed project.

The City Council previously committed $1.2 million in tax-increment financing funds for the project. The additional $1 million would also come from TIF proceeds, according to Mayor Jim Langfelder.

City Council members haven't yet voted on the additional funding and appeared supportive at the Sept. 6 meeting, though Ward 8 Ald. Erin Conley said she didn't like Midwest's plan to not use unionized workers for the $21.5 million in "hard cost" renovations.

"That is a little bit of the problem," Conley told Related senior associate Tregg Duerson, who was giving an overview of the project to the council. The use of TIF funds requires prevailing wage, although not necessarily union labor.

Duerson said the company intended to work with Calvin Pitts' Springfield-based B.O.N.E. LLC and other minority- and women-owned businesses to conduct the renovations. However, he said Related is willing to consider a "blended project" that includes labor unions.

Ward 3 Ald. Roy Williams, whose ward includes Poplar Place, said he wants women, as well as Black and Hispanic people, adequately represented among workers in the project, "whether through unions or prevailing wage."

The renovations will involve the demolition of 67 buildings and the gutting and renovation of 75 buildings to preserve 100 units that include 50 single-family homes and 25 duplexes.

"We think this is an area that has a high demand for affordable housing," Duerson said.

Williams said the improvements are welcome and overdue.

"These are exciting times and good things happening," he said. "I think the neighborhood associations that surround Poplar Place are frustrated. They're frustrated in how long it's taken."

Boarded-up buildings, overgrown shrubs, peeling paint and fallen trees are prevalent at Poplar Place in this view of along Poplar Avenue in the low-income housing development on Springfield's east side. More than $21 million in improvements are planned by the owner, Chicago-based Related Midwest. Demolition and construction are scheduled to begin in January.

Originally constructed in 1950, Poplar Place is a 142-townhouse family apartment community of mostly duplexes and some single-family homes with 244 units. Only 15% of the units are occupied, and the units and roads in the complex are in disrepair.

Much of the funding for the project will come from federal and state tax credits that help developers attract investors for financing.

There's a $6.25 million gap in financing that Related hopes to make up with the city funding and with $5.25 million in grants and low-interest loans from the Illinois Housing Development Authority. IHDA will consider finalizing its financial support later this year.

Related Midwest bought Poplar Place from Garden Court Associates in 1999 and completed $4 million in renovations on what were 284 units at that time, according to Tarrah Cooper Wright, a Related spokeswoman.

Those renovations amounted to about $14,000 per unit. The proposed redevelopment will make more than $220,000 in renovations to each unit, Wright said.

Rules governing the tax credits used to finance improvements at below-market-rate developments such as Poplar have prevented the company from spending more on renovations since the acquisition, she said.

Duerson told the Springfield Economic Development Commission that it was a mistake for Related to spend so little on the previous renovations.

Commission member Sheila Stocks-Smith said Poplar Place has been known for years as a neglected "slum property" and that "people have lived in very dire straits there.

"It does give me a little pause because of your record," Stocks-Smith told Duerson.

Duerson noted that Related Midwest handled the Madison Park Place Development, and Williams said he has been impressed by that project, which replaced the Hay Homes, so he has faith that Related is trustworthy.

Madison Park Place is managed by the Springfield Housing Authority, which will take over management of Poplar Place from Related after the redevelopment.

The private roads in the development will become city roads, and a new entrance to Poplar Place will be created on Old Rochester Road as part of the project. Current entrances are at 25th Street and Poplar Avenue, and at 25th Street and Sherwood Street.

Poplar Place has been known as a high-crime area and was the site of several shootings and homicides in recent years. There were 1,391 calls for police service in 2011, 1,018 in 2016 and 325 in 2021, according to the Springfield Police Department.

Williams and Assistant Police Chief Joshua Stuenkel said a reduction in population density could be the reason for the reduction in crime in the neighborhood.

Williams said Section 8 vouchers will help many families afford the rents, which will continue to be below the market average. Existing tenants won't see their rents increased for three years, Wright said.

The renovations will be structured so many of the approximately 30 families remaining in Poplar Place will either be able to move into newly renovated units or be temporarily housed outside the development, with their rent and moving costs covered by Related.

Security cameras and license-plate readers also will be installed in the development, he said.

"We think it will become a better place to live," he said.

Kroger still not back in business