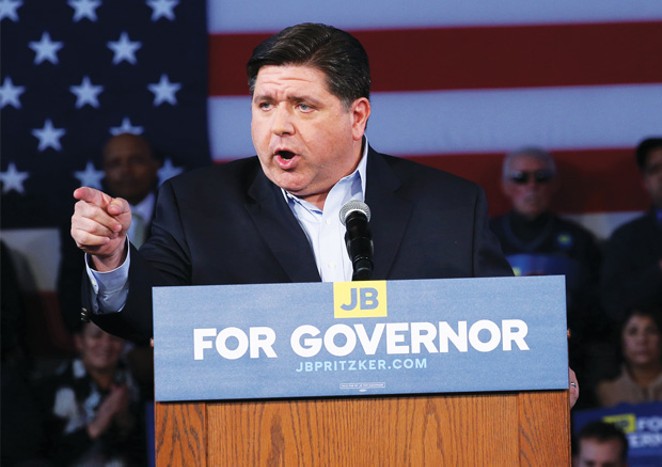 “Either Rauner lied when he was running for governor and said he was pro-choice but isn’t, or changed his mind because his right-wing buddies said, ‘If you don’t, we’ll run somebody against you,’” Pritzker said in an interview Tuesday in Springfield. “I don’t know what it is, but either way, he is wrong and he shouldn’t be our governor.” Pritzker was here to participate in the Illinois Women’s March on Springfield, held April 25 at the Capitol.

Pritzker said if he is elected governor, he is prepared to preserve women’s reproductive rights at all costs. “We need a governor to sign this bill and when I become governor, I will demand immediate action and I will be the governor that will sign it,” he said.

During his bid for governor in 2014, Rauner ran TV advertisements pushing his pro-choice views. (See “A two-faced race” by Rich Miller, Nov. 6, 2014, Illinois Times.) However, Rauner recently pledged to veto a bill designed to strengthen reproductive rights in Illinois.

The bill, which passed in the House on the day of the march, would remove language from the Illinois Abortion Law of 1975 which declares that “the unborn child is a human being from the time of conception and is, therefore, a legal person for purposes of the unborn child’s right to life.” Additionally, the proposal would remove a provision that denies health insurance coverage of abortion to women on Medicaid and State Employee Health Insurance.

The bill gained steam after President Donald Trump signed a measure earlier this month giving states the option to defund family planning services such as Planned Parenthood. “I have been a long supporter of Planned Parenthood and women’s reproductive rights, so obviously, as Donald Trump and the Republicans are trying to take away those rights, I am out here fighting,” Pritzker said. “I have been in Peoria fighting and I have been in Washington, D.C., fighting, whether it’s been marching, making phone calls or knocking on doors getting people to support candidates that will beat these guys.”

Rep. Sara Feigenholtz, D-Chicago, cosponsored the abortion bill. In a press release, Feigenholtz explained the proposal’s importance to reproductive rights. “After repeated threats from the White House and President Trump’s remarks to strip abortion rights away from women, this legislation was necessary to safeguard a woman’s right to make decisions that affect her personal health in Illinois,” she said. “Everyone has the right to not only see democracy in action but also participate in it. I was honored to give my constituents that opportunity.”

Deb Wilkstein, who attended the women’s march, voiced her support of the measure. “We’re really concerned about the attacks on women’s rights and we need to do everything we can so our lawmakers are aware that we won’t stand for this,” Wilkstein said. “Not only have we not had equal rights, but these lawmakers are tearing away the rights that we have had for the last 40 years.”

Pritzker concluded that it’s up to the governor for this proposal to see the light of day. “Don’t forget the promise that you made, and don’t stand up for your right-wing buddies,” he said. “You need to stand up for what you promised all of us when you ran for governor.”

Alex Camp is an editorial intern for Illinois Times. He is pursuing his master’s degree at University of Illinois Springfield. Contact him at intern@illinoistimes.com.