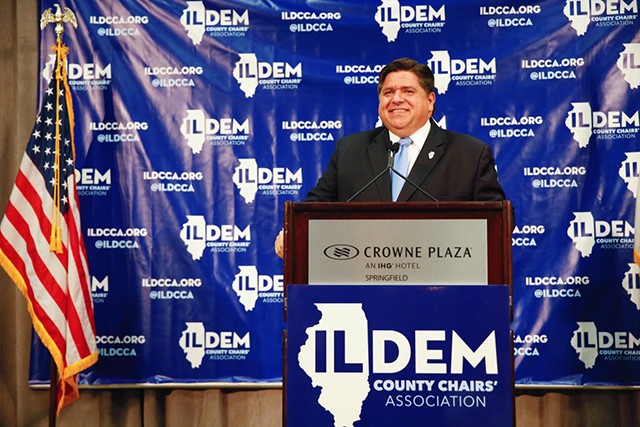 J.B Pritzker, D-Chicago, rallied supporters as he presented his case to be the next governor of Illinois on State Fair Democrat Day, held at the Crowne Plaza Hotel in Springfield on Aug. 16.

Pritzker was in the midst of a four-day, 20-stop bus tour across Illinois, where he stumped for statewide candidates alongside running mate Rep. Juliana Stratton, D-Chicago, U.S. Senator Dick Durbin and Treasurer Michael Frerichs.

In a speech to over 1,000 people in attendance, Pritzker shared a quote by civil rights icon Ida B. Wells to tie in problems plaguing Illinoisans. “A century ago, a black woman named Ida B. Wells rose to the front lines of the movement for civil rights and became a force in fighting the injustices of her time,” he said. “Wells wrote, ‘The way to right wrongs is to turn the light of truth upon them.’ As Illinois Democrats, we believe in shining the light of truth upon the wrongs of the world and working to set them right.”

Pritzker went on the offensive against his opponent, Gov. Bruce Rauner, criticizing the governor’s management of the state’s affairs for the last three years. “It’s wrong when a governor refuses to address or give voice to the challenges facing people across the state of Illinois,” he said. “When he does speak up, however, it’s not to stand up to President Donald Trump when he’s taking away health care from millions, or equating white supremacists with civil rights marchers. No, when Bruce Rauner speaks up, it’s an attack on the people of Illinois.”

Pritzker then asked the crowd to continue their support as the campaign trail heats up in the coming weeks and months. “Over the next 82 days, we have to work our hearts out by getting every Democrat out to the polls,” he said. “We also have to invite Independents and Republicans to join us in the battle to retake our state and nation from an unhinged governor and his pals in the White House.”

Prizker is comfortably ahead in the polls against the governor. According to a recent poll from Victory Research, Pritzker leads Rauner by 11 points, 41-30. “Bruce Rauner virtually called teachers illiterate, and managerially incompetent,” he said. “Well let me tell you who’s managerially incompetent. It’s a governor who can’t pass a budget and wastes a billion dollars of your taxpayer dollars.”

Pritzker talked about his role in stabilizing the Democrat Party’s infrastructure heading into the fall. “This is about what we ought to be doing right in the Democratic Party and that’s making sure that we’re competing for voters all across this state and across every single county,” he said. “Building an infrastructure for our party means that we’re helping candidates running for local offices, that we’re knocking on doors, gathering volunteers, and we’re going to double up on that for the general election.”

According to Illinois Board of Elections, going back to the 1976 General Election, no Democratic gubernatorial challenger has won in Sangamon County. Despite the disproportionate numbers, Pritzker said that Rauner’s rhetoric has caused so much dissension within the Republican Party that he believes areas that are generally in favor of the GOP are up in the air come November. “It’s not working well for the governor dividing the state,” he said. “In fact, he’s so divisive that he’s divided his own party. The truth is, Democrats are united, and people feel like this is one Illinois, and you need a governor who is extolling the virtues of that unity across the state.”

Alex Camp is a master’s degree graduate in Public Affairs Reporting from University of Illinois Springfield. He is currently a freelance journalist. Contact him at acamp4@uis.edu.