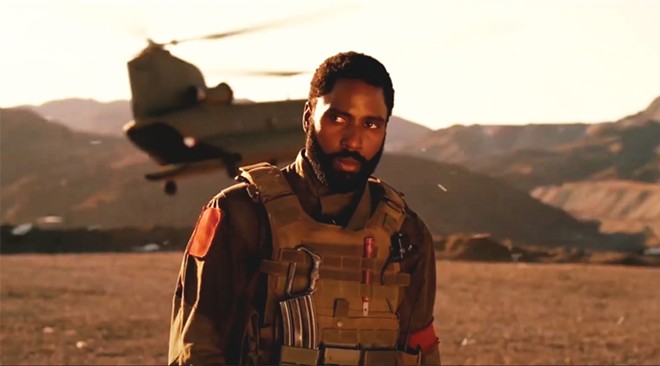 Warner Brothers was concerned that by releasing Christopher Nolan's Tenet in overseas markets first that key plot points and twists would flood the internet, ruining the many secrets the film has in store. They shouldn't have worried – I couldn't tell you what this movie was about if my life depended on it.

Expectations surrounding Tenet couldn't be higher. Nolan's reputation is such that he's one of the few filmmakers whose name above the title can put butts in seats, and that's just what Warner Brothers is hoping his latest will do – persuade viewers to overcome their COVID-19 fears and come back to see his latest on the big screen. Whether it will succeed or not is to be determined, though a first-week European take of over $50 million is a good sign. However, I think that after the opening weekend in every market, word will get out that it simply isn't worth the ticket price, let alone risking your health.

As I say, the studio's request that critics keep the plot's secrets close to our vests will be easy. A horribly wooden John David Washington is The Protagonist (no, I'm not kidding), an American operative who, after a seemingly botched mission in Russia, is told that his life-risking derring-do was nothing but a test to see if he has what it takes for a special assignment. Given little to go on, he's sent to Europe where he's shown some mysterious artifacts. This leads to a globetrotting adventure that features hidden cities, the possibility of nuclear annihilation, forged art works and, as with many of Nolan's films, an obsession with time and its relentless march.

The first act is replete with one exposition dump after another in which characters are required to provide background to their lives, explain key events and, in Nolan's films, go over the rules by which their respective world operate. So much information is thrown at the viewer, it's hard to keep up with exactly what's going on. In the end, it doesn't matter who is who, what side they're on or just how this brand of time travel works. The director has other fish to fry.

Nolan is obviously in on this joke. Key moments in which seemingly key plot points are being explained are purposely drowned out by Ludwig Goransson's abusive score or sound effects that are turned up to 11. Important clues are dispensed by characters with masks or breathing devices on or while they're operating a catamaran, water loudly splashing as they do. The story is inconsequential. Nolan has always been about dazzling us with grand set pieces and with their complex choreography and meticulous execution, it's obvious this is where his interest lies. To be sure, the grand action sequences on display here are impressive, a scene involving a jumbo jet crashing through an airplane terminal being the highlight.

But that's not enough.

The biggest problem with the film is its lack of heart. This is a cold exercise lacking an avenue through which the viewer can become emotionally engaged. Nolan's best work, The Dark Knight trilogy, Inception and Interstellar, all feature characters we sympathize with because they are striving to be reunited with or save people they genuinely love. That aspect is non-existent here; instead, we're given poorly drawn characters who are nothing but props awash in the filmmaker's over-produced set pieces. Early on, one of the characters advises, "Don't try to understand it," which proves to be good advice where Tenet is concerned. Better yet, just don't see it.