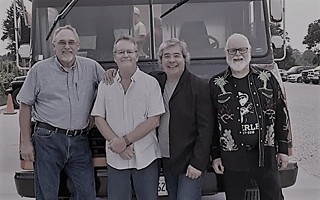 The Elderly Brothers pull into Weebles this Friday night.
Welcome to almost 2023 or actual 2023, depending on when you read your Illinois Times, but I always believe everyone grabs a print copy (or goes online) every Thursday with bated breath to see what we have in store for you. And while we are in the mindset, isn’t it really remarkable and wonderful we have an Illinois Times for you to peruse every week of the year. It’s something to add to the “let’s be thankful for what we got’’ list that should be included in your New Year’s resolution list.

Since last weekend’s Saturday night was Christmas Eve, which is always a slow night for live music action, that means this week’s Saturday night is New Year’s Eve, which of course you know is the complete opposite and generally one of the busiest times of the year for music everywhere the holiday is celebrated. With Sunday Funday falling on New Year’s Day there’s an absence of gigs there, but by next weekend we will be back up to snuff and knocking out the shows like nobody’s business.

If you so desire, begin your New Year’s celebration a little early with a Thursday night party at Whiskey Jack’s with Brandon Santini’s Big Time Blues Trio, featuring Brandon plus Robert Sampson and Ron James.

On Friday, get it going with the Rob Killam Quintet, consisting of five, definitely alive, veteran jazz musicians at Boones for Friday Night Jazz, then roll on into Weebles for the Elderly Brothers delivering real-deal country songs with four-part harmony and stellar musicianship forged by years of experience and friendship. You can continue the chase as Branded gets hot at the Curve Inn while Damned Torpedoes are the bomb at Danenbergers doing Tom Petty tunes all night long.

I couldn’t wait to get to Saturday and announce the return of First Night Springfield for the 35th anniversary of the longest-running official First Night celebration west of the Alleghenies. After a break of two years the live show is back, all self-contained in the shining edifice known as the Hoogland Center for the Arts. I do hope folks understand just what this event means to our city and just how neat and sweet it is. Now let’s stand up and congratulate Sheila Walk, the Springfield Area Arts Council executive director, for being a large part of keeping it going. Sheila, I know, would like to thank all the volunteers, performers, contributors and attendees, along with anyone and everyone who had anything at all to do with the continued success of First Night Springfield. I’ve spent too much time just going on about it, so now you will need to do some googling to find out about it, but so you should at springfieldartsco.org.

Otherwise, on the hopping night of New Year’s Eve, I got word from Kip that Off the Wall plays host at Danenbergers to a big party with a food bar, party glow sticks, midnight toast and a chance to win tickets to DFV’s Outdoor Summer Concert Series and for OTW to do a house party at your house, all for a $25 ticket price. Also, the mighty cool Curve Inn presents Jeff Young and the Bad Grandpas for a $5 ticket cover that covers free pizza (at 10 p.m.), party favors (that phrase always sounds so mysterious) and complimentary champagne for a NYE toast (at midnight, of course) so you can bring in 2023 in style, or any way you so choose.

There are plenty of other live music happenings on NYE, mostly in the small surrounding towns, so go for the gusto. I’ll see you next year.