Powerful Rainey one of year's best 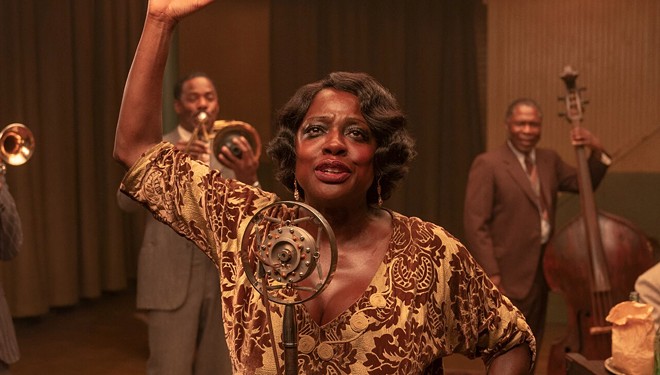 There's a current of justified anger that runs through August Wilson's work, a sense of rage that propels and traps his characters, driving them forward to succeed against unjust circumstances, yet growing ever larger in the face of one disappointment after another. Levee is such a man, one with progressive ideas about his art and, more importantly, how he should be treated as a man. And though Chicago might have been considered progressive in 1927 regarding the integration of white and Black cultures, there were still far too many citizens there who held on to antiquated notions regarding race relations and equality. Encountering this brand of malignant ignorance was something Levee and his peers were forced to deal with daily, fueling an inner rage that became increasingly difficult to contain.

Wilson's Ma Rainey's Black Bottom deals with a small group of African American characters who've had to endure blatant racism their entire lives and how each of them has chosen to deal with it. Winner of the Tony Award for Best Play in 1985, director George C. Wolfe's adaptation is one of the year's best films, a blistering indictment of our nation's greatest sin, a powerful reminder of the devastating effect of blind prejudice and a message that regrettably continues to need repeating.

Taking place over one blistering hot day in the Windy City, a quartet of musicians arrives at a small recording studio, anxious to make a decent wage for a change. Cutler, Toledo and Slow Drag (Colman Domingo, Glynn Turman and Michael Potts, respectively) have been playing together so long, a degree of intuition have developed between them. The give-and-take they display while playing is instinctual, a well-oiled machine that produces well-played music that hits every note but lacks swing. However, their new trumpet player, Levee (Chadwick Boseman), has different ideas. Eager to introduce new arrangements of the songs in the group's repertoire, as well as some original compositions, the musician's vibrant trumpet playing gives the group's music the edge it's been missing. The three veterans resist this, as does Ma Rainey (Viola Davis), the vibrant chanteuse they play for, a fiercely determined woman who's fought hard for the success she's earned and has no plans of giving it up.

As attacked by the cast, the conversations crackle with energy. Wolfe resists the urge to open the play up, shooting only a few scenes outside the confines of the recording studio. And yet, he's able to avoid a sense of stagnation. Employing a variety of subtle camera moves as well as the occasional dramatic arc or swoop, coupled as well as an aggressive editing style, he energizes the material. There's a vibrancy to the approach that obscures the fact that the action takes place in only one location.

However, it's the work of the cast that brings a fierce energy to the material that can't be denied. Davis dominates every scene she's in; whether singing, glowering at a band member or quietly delivering an impassioned monologue, the actress is a force of nature, goading her castmates to keep pace. Boseman is more than up to the task; he's a live wire here, bursting at the seams, giving Levee a sense of purpose that defines him, yet leads to his downfall. It's a defining performance and, as his last, a fitting testament to his talent.

Ma Rainey's Black Bottom is a primal scream, a searing condemnation of a society that would allow the soul of a people or individual to be stamped out for having the temerity to demand independence and equality. That it retains its power over 35 years is a tribute to Wilson's writing; that it's telling remains necessary is to our shame.