Will tougher enforcement improve shabby housing on the east side? 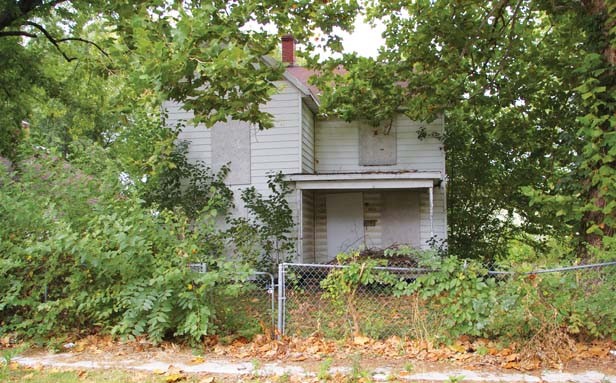 PHOTO BY DAVID HINE
A vacant and boarded house on Springfield’s east side, where consultants nine years ago recommended concentrated code enforcement.

If its aldermen were running Springfield’s fire stations, the city would have burned down years ago. On Oct. 18 the Springfield City Council passed a complex new ordinance that stiffened the penalties for owners of dilapidated buildings. The vote came a mere nine years after consultants urged that such action was necessary to slow the rot that has been spreading through east side housing for years.

Alert readers might recall the moment in 2002 when local officialdom turned its gaze briefly from the west, where most of Springfield’s newest houses were going up, to look in the other direction, where many of its older ones were falling down. The city’s Office of Planning and Economic Development commissioned the St. Louis urban consulting firm of Peckham Guyton Albers & Viets (PGAV) to draft an east side neighborhood development plan. (“The Eastside speaks,” May 6, 2003.)

This was a little like organizing a comeback tour for Elvis. The commercial real estate market in that part of town had collapsed. (Forty percent of the properties were being rented; a 15 percent renter occupancy is considered healthy.) PGAV found that of the more than 1,700 parcels of property in the area bounded by Dirksen Parkway, South Grand Avenue, 14th Street and Cook Street, more than 500 were deteriorated, vacant or boarded-up.

PGAV likened the east side to such wastelands as the burnt-out West Side of Chicago (although their St. Louis pride forbade them from comparing it to that city’s derelict North Side). The firm urged the city to “conduct concentrated code enforcement . . . in the western portion of the neighborhood.”

Apparently the city opted for a different policy, which has been to eliminate the lack of compliance by simply waiting for time to eliminate the houses. And it must be said that the policy was working. An update last summer by the Springfield-Sangamon County Regional Planning Commission found that new construction in the area was way down (a tenth of the 2002 level), the number of houses with exteriors in good condition had dropped and those with moderate or advanced deterioration had increased. There were fewer vacant lots than in 2002, but presumably only because some of the old ones were consolidated to make larger lots for the handful of new houses that have been built.

The new get-tough rules aren’t, very. They call for mandatory registration after a building racks up six violations of the city’s health and safety codes; PGAV recommended two. The proof of an ordinance is in the enforcing, and the strictest standard would do no good if the city doesn’t use it. Consistent enforcement is messy and complicated, often involving recalcitrant or dodgy landlords and befuddled or broke owners-occupiers. More to the point of politics, it requires staff, and the aldermen are servants to a public that is happy for the council to allow neighborhoods to run down as long as it means that their tax bills are not run up.

However, in this case official neglect has as much wisdom as politics in it. Decent housing costs more than poor people can afford, and the supply of quality subsidized housing paid for by the feds or by local charitable groups is never enough. Springfield’s unofficial answer to the problem of affordable housing for poor people has been to look the other way when people move into undecent housing.

So why undertake now to fix a policy that for decades has suited city hall? One reason might be that substandard housing is no longer a problem only for poor people; the City of Springfield is now having to pay to demolish and clear these wrecks by the dozen. Or maybe it’s because the wholesale destruction of neighborhoods in inner Springfield as a result of bad zoning, indifferent code enforcement and hand-me-down housing policies has finally embarrassed the Chamber of Commerce into getting involved.

There is no way without a helicopter or a blindfold to get to Springfield’s tourist-friendly downtown from I-55 without seeing neighborhoods that look like East St. Louis with a hangover. When the Chamber shows off the city to industrial relocation agents, it finds itself in the same pickle as a realtor who shows a house next door to one with bed sheets tacked over the windows instead of curtains. They can talk up that nice new kitchen all they want, but they ain’t gonna make that sale.

The real issue, of course, is not that the poor cannot afford decent housing but that there are too many people who are not productive participants in the economy in the first place. It would be nice if organizations like the council and the Chamber of Commerce addressed that problem. Until it is solved, the city will simply face the same old problem at new addresses.