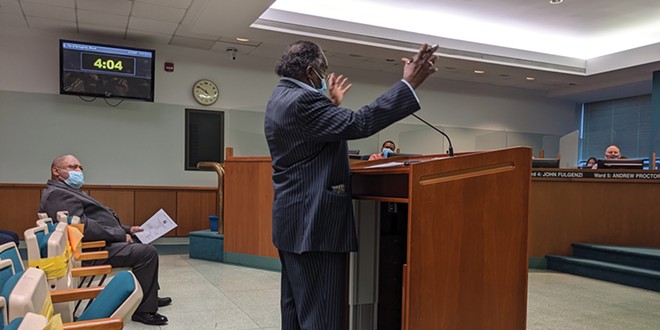 Roy Williams, Jr., would-be replacement for former Ward 3 Ald. Doris Turner, was voted down 6-3 on Tuesday, March 2, by the Springfield City Council. Afterward, he said he's not withdrawing his candidacy, and so the council is expected to take another shot on March 16, when a simple majority vote will be needed to install him as the replacement for Turner, who has moved on to the state Senate. Mayor Jim Langfelder, whose choice must be confirmed by the council, picked Williams last week; Turner's preference isn't clear – she wasn't present Tuesday, when seven votes were required to install Williams as an emergency measure. But a half-dozen east side residents urged the council to appoint Williams, who is president of the Faith Coalition for the Common Good. The council balked on the premise that Williams won't promise not to run for the position in 2023; two must flip for Williams to get on the council, and he isn't giving up. "My hat is still in the ring," he says. "We'll come back in two weeks and see what happens."