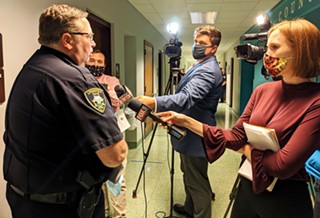 No one in Springfield, likely, has heard of Brian Eggleston, a bartender who sold dime bags of weed to make ends meet. I covered his first trial in Washington state, back in 1997.

The cops did what drug warriors do. Knowing Eggleston owned guns, they came to his house early in the morning, expecting to catch him by surprise. They certainly did that.

Eggleston, who slept with earplugs because he worked late and didn't want to be wakened by kids at a nearby school playground, emerged from his bedroom naked save for a 9 mm in his hand. The cop on the other end of the dim hallway fired first, with the bullet striking Eggleston in the groin and performing a colectomy as it exited his back side.

Eggleston, who had no criminal history, survived several gunshot wounds. The cop did not – the officer was as much a victim of the drug war as his killer, who had no reason to shoot anyone over an offense that would have brought probation. Convicted of murder after three trials, Eggleston remains an inmate.

A few years later, I wrote about Annette Green, a nickel-and-dime crack dealer gunned down during a 2001 drug raid by a St. Louis area cop who mistook a carriage bolt she held for a gun. The cop was back on duty within a couple weeks. As with Eggleston, police found no drugs worth mentioning. Years later, Green's son protested the killing of Michael Brown in Ferguson, but he told the New York Times he wasn't sure why. "It's like, I believe we wasting our time out there," he said. "They not doing nothing. They not going to do nothing. I know that off experience."

Now, we have Breonna Taylor, killed during a botched drug raid in Kentucky. It's cases like hers, plus fallout from George Floyd and other events far from here, that have Springfield city council members vowing to protect people from bad cops. Green's son was right: Throughout the nation, too much of the same bad stuff has gone on for too long, and we haven't done enough to stop it.

It's hard to see how an ordinance proposed by Ward 3 Ald. Doris Turner would solve anything. She wants to put into city code what's already police department policy: Don't use chokeholds or rubber bullets or deadly force unless necessary. Cops could ask judges for no-knock warrants only under "limited circumstances."

This is all good, but, also, it already is being done, according to Chief Kenny Winslow, who often is praised by council members and civic leaders as an honest cop who doesn't brook bad ones. He's upset the police union to the point that officers in 2017 delivered a no-confidence vote. Would making police brutality an ordinance violation change anything?

Can police enforce the law without breaking down doors, which seems risky even if you knock? Todd Hodges, an alleged marijuana grower who's gotten busted twice, tells me that Springfield police both times broke down his door, the first time when he was in his living room, the second time when no one was home. Was there a better way, given pot gardens can't be flushed down toilets? We should ask whether forcible entry is Option A or a last resort, after safer alternatives such as arresting folks outside their homes, then searching premises, have been rejected.

Turner's ordinance also would require the police department to compile a public database of officer misconduct cases. Go for it, but there's no need for an ordinance. Already, anyone can get internal affairs files via public records requests and put the information on whatever webpage they like. That's what Chicago activists did years ago, thanks in part to lawsuits here in Springfield establishing that internal affairs files are public records – remember when the city paid $100,000 to settle the Shredgate fiasco spawned when cops destroyed disciplinary files rather than make them public? Cops should chase criminals before they should be paid to compile databases that already can be created.

The proposed ordinance, which is on next week's council consent agenda, also says that misconduct cases may be referred to the Police Community Review Commission, which can't subpoena witnesses or evidence. If the commission has no tools to conduct proper investigations, what's the point? Already, cases may be referred to the commission. Shouldn't we be talking about how to conduct fair, thorough investigations that enjoy public confidence? Turner says she'll propose changes to how the commission functions, but won't say what those changes might be.

It's not that we shouldn't be asking questions. As with any legislation, the question should be, will this change anything? If the answer is no, maybe we aren't trying hard enough.