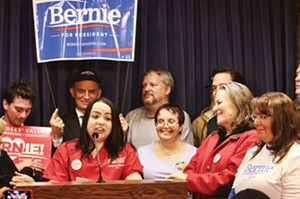 According to a press release, campaign volunteers were able to collect more than 9,000 signatures for Sanders – which is triple the required 3,000 – as well as more than 16,000 signatures for delegates across the state’s 18 congressional districts, a show of considerable statewide support for a presidential candidate often portrayed as an outsider.

Enthusiasm ran high in the unusually crowded press room in the basement of the Capitol, with at least two dozen delegates and supporters from all over the state clustered around the podium. According to Andrea Putnam, who is in charge of the Sanders campaign for ballot access and delegates, “We hope that this strong, robust team that’s already been on the ground here will be able to carry on, support our early states and take us all the way” to the presidency.

Delegate Tim Johnston of the Working Families Party (described as a “growing, grassroots progressive party that fights for the 99 percent”) said that he supports Sanders because he is the only candidate who supports single payer health care. “With single payer health care I’d be able to save money to put my 18-year-old son through college. But with Bernie’s debt-free college plan, I wouldn’t even have to,” he said.

Adriana Sanchez of National Nurses United is also running as a delegate. She spoke passionately on behalf of her union, which she said was the first national union to endorse Bernie Sanders for president, citing Sanders’ policies on voting rights, immigration and criminal justice system reform as key reasons for their support. “Hillary Clinton seems to think we should support her solely because she is a woman,” Sanchez said. “As an organization composed of 90 percent women, we’d love to break the glass ceiling. But for now we want to break the class ceiling.  It is Bernie, not Hillary, who really shares our nursing values of caring, compassion and community to heal America. When he says that thousands of Americans die every single year because they don’t have health insurance and don’t go to the doctor when they should, those are my patients he’s talking about.”

Delegate candidate Dr. Pamella Gronemeyer of Glen Carbon spoke immediately after Sanchez, stating that doctors and nurses are together in support of Sanders. Gronemeyer identified herself as a member of Physicians for a National Health Program as well as the Illinois Single Payer Coalition and said that she has found a surprising amount of support for Sanders in the traditionally conservative Metro East area. “One thing that’s exciting me about this campaign is talking to young people,” she said.  “When I go in with my Bernie button to stores and restaurants, you should see the kids that ask me about him.”

Andrew Spiro, a delegate from Springfield, identifies the primary issues that got him on board with Sanders were income inequality and global warming. “The 18th is one of the most conservative districts in the state but on the weekend after Thanksgiving we started in Normal and then went to Pittsfield just before Christmas and everywhere we went people signed Bernie petitions and were curious about him,” he said.

Immediately after the press conference, the petitions were brought in for filing to the Board of Elections, located in the Town and Country shopping center on MacArthur Blvd., where a rally for the Sanders campaign was held outside.

According to Donna Smith, Springfield contact for the campaign, “The rally was beautiful. I’d say maybe 50 people showed up. The campaign is going very well, we have a broad database and we’re out campaigning,” she said. “He’s going to make a great president. We need him.”