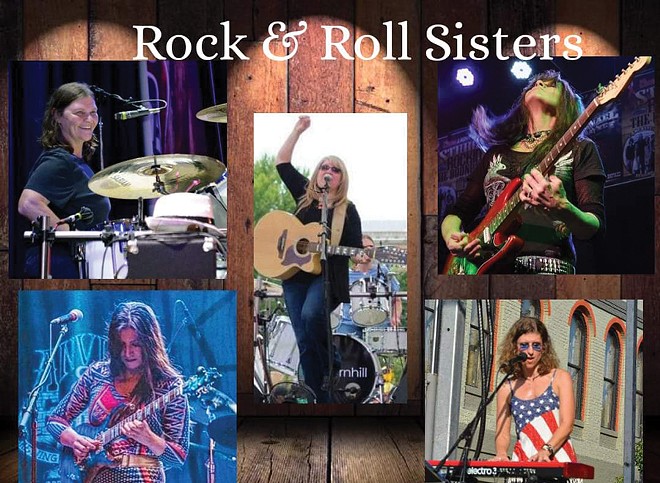 Rock & Roll Sisters jam out at the Curve Inn this Friday night.

As we begin our romp through all the live, local music in the first full weekend of May, be prepared to make some tough decisions. Isn't it just too bad there is so much to do and so many music events, that you, my friend, aren't going to be able to experience them all? But that shouldn't stop us from trying, so here are a few of the many things a-happening.

This would be an appropriate time to casually ask some friends, if you're of the mind to, when exactly is Cinco de Mayo, and while you're at it, check when was the War of 1812 and who's buried in Grant's Tomb. After that smart-aleck business, you should probably know what Cinco de Mayo really represents, and that would be (per Wikipedia) "the anniversary of Mexico's victory over the French Empire at the Battle of Puebla in 1862." Also, be aware the date is not Mexico's Independence Day (that's Sept. 16) and that the Cinco de Mayo holiday is much more popular in the USA, thanks to good marketing campaigns by beer-producing companies, than it ever was or will be in our good neighbor nation to the south.

Now with the history lesson over, let's go celebrate with live music on Cinco de Mayo, including the Samba Llamas at Roots Latin Grill (5-8), Captain Geech at the Curve (5:30-8:30), Allison Lovdahl, MaryKate Smith and Damian Zimmerman at 1st & 3rd in Petersburg (6-8) and Robert Sampson and Friends at Whiskey Jack's (7-10). And just so you know, the Styx concert originally scheduled to happen at UIS in November 2021 has been rescheduled for May 5 in case you want to celebrate that way.

Friday still rules for live entertainment in Springfield, and this week delivers us a few new combos along with the tried-and-true. If there ever was a name that fit a band, how about this one called Rock & Roll Sisters out playing at the Curve, featuring Patty Kniss (drums), Tina Thornhill (bass), Gwen Harris (guitar), Josie Lowder (guitar) and Kyla Kruse (keys), with everyone joining in on vocals. At Long Bridge Golf Course, here comes the debut of Stereo Typical, a local band that says they do "Classic rock, country, pop! We play it all!" and that sounds like a very fitting, worthwhile concept.

We haven't heard from Pinch of Grace in a while, and now bandmates Chris Jensen (guitar), Brad Beneky (bass), Mike Tasch (keys) and Andy Hoff (drums) hit at the Butternut Hut doing their groovy gig of originals and covers in PoG's inimitable style. To top off Friday, our area jazz revival of late continues unabated with Sam Crain Trio at Boone's, The House Trio at Ranks and Johnnie Owens & friends at Anchors Away.

As my pal Supe Granda says, "Friday just turns into Saturday night," and that would be an apt description of the Fat Ass 5K & Street Party for Charity happening downtown. The shindig kicks off on Friday with music by The Shenanigans and After Sunset, then heads into Saturday morning with all kinds of acts on the run, walk, eat and drink route with Off the Wall serving as the post-race, street party entertainment.

In a much more bucolic setting, West of Wise Winery near Petersburg gets May going in the right direction with a Saturday afternoon performance by Jeff Berendt and Schy Willmore as Me, Myself and Schy.

There's plenty more going on this Saturday, plus Sunday rolls along with all kinds of goodies available for you to peruse in our music listings.

May you enjoy your May weekend, and I'll see you next week.