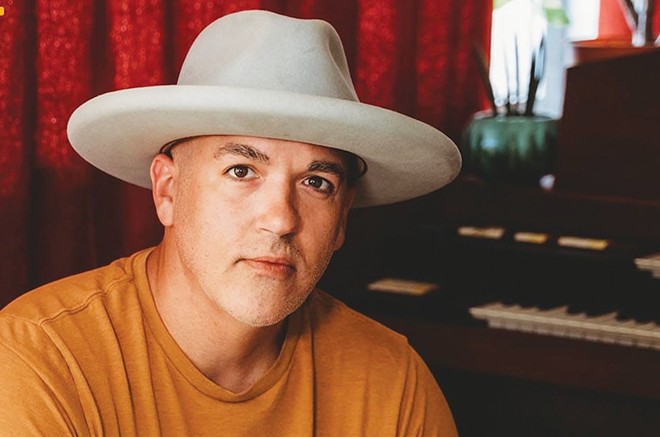 Former Springfieldian Joshua Reilly streams on Facebook Live every Tuesday in May at 7 p.m. (CST) from his home in central Florida.

As we wander into the first full week of May 2020, the world we live in is still quite topsy-turvy from only one year ago, or any time in the past, for that matter. We're keeping close in our hearts those who've lost loved ones and those on the front lines, plus making a special effort to care for all of us dealing with life in the midst of a pandemic.

Speaking of a year ago, I took a gander at Now Playing for our May 2, 2019 issue and it's amazing to see what was happening. There was a shout-out to Casey Cantrall and Albert Capati for their work on stage in the musical production of Blood Brothers. We saw the first local Tiny Desk Concert street festival hosted by NPR Illinois 91.9, featuring Jeff Williams, Looming, The Deep Hollow, Dexter Anodyne and Kate Laine, downtown on May 3. Currently Brian Reilly of Cured Catering works to organize the Staff Meals program, but on May 4 of last year, he and wife Melissa hosted their wedding reception out at the state fairgrounds with plenty of local live music. At the Curve Inn on May 5, we marked the return of Guitar Town, a special concert originated by Mark Estill highlighting local guitarists. On May 7, George Ranks celebrated the 200th JB's Open Jam, originally hosted by the late John Brillhart and continued with guest hosts after his untimely passing. And our Band Spotlight (it shall return) featured Georgia Rae, an award-winning fiddler, at Anvil and Forge on Saturday evening.

Now I hope that makes everyone feel better and not worse. It certainly amazed me to read in just one column all that was happening for the upcoming week, not including regularly scheduled gigs, festivals and shows. Even though it was devastating to see how much we're missing, hang in there as we travel through these strange times to the other side. In the meantime, here are some things folks are doing to fill time virtually until the real returns.

Dennis Darling, a hometown purveyor of fine music, has posted several "Folk Music 101" videos on his YouTube channel. Created on his "smartypants phone portastudio" over the last three years for his kids in Oregon to use as homeschooling tools for their kids, DD graciously offers these educational and entertaining performances to anyone anywhere "with a device and a willingness to look 'em up." He also mentioned that Sam Crain frequently posts on YouTube as well. I checked out Sam's channel and the prolific guitarist first started some six years ago, amassing nearly 1000 clips of original songs and jazz standards with a bunch done recently.

On the Facebook Live portion of this column, Theresa O'Hare and I play together from home on Friday night at 8:18 to celebrate our fourth wedding anniversary. Joshua Reilly, a Springfield singer-songwriter who has resided in central Florida for several years, streams live every Tuesday in May at 8 p.m.EST (take note CST folks) to replicate his long-running songwriter sessions known as the Melody Artisans of the Crooked Thumb. In other online connections, the Champaign-Urbana Folk and Roots Festival streams A Tribute to John Prine, Saturday at 8 p.m. with many local C-U musicians performing to support this fundraiser for the 2020 festival set for October. Recently, Joel Styzens, a Chicago-based, multi-instrumentalist, performing composer with Springfield roots, organized a cool project called apartTogether that features "8 hearts, 7 countries, 1 song" available for your perusal at relaxyourears.com.