Does the city of Springfield need its own planner? 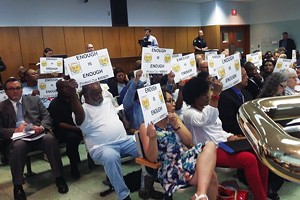 It sounded like a Seinfeld episode. The Salvation Army buys a building on Ninth Street for a new homeless shelter and spends half a mill fixing it up, only for Mayor Jim Langfelder to tell them, Oh, by the way, we will need the land for a proposed transit center. It is not the City of Springfield that will buy the property from the Salvation Army, however, but Horace Mann, the Father of All Asphalt, which reportedly wants to raze the building to replace parking spaces lost to expansion of the 10th Street rail corridor. So in the name of a project that will not bear fruit for seven years, maybe 10 years, maybe 100 years – remember, 38 years ago they were going to build something on the old Abe Lincoln Hotel block too – downtown gets yet another street-killing surface parking lot.

Wait, it gets better. Having rendered the homeless shelter homeless, the mayor works to put the homeless shelter on a new site that is less convenient to that clientele and unwanted by its new neighbors, then doesn’t tell the alderman of the affected neighborhood until it’s a done deal.

Maybe suppler minds than mine are at work here, deftly maneuvering properties in anticipation of the multimodal transit center construction like pieces on a chessboard, making moves whose significance the rest of us are too dim to appreciate. Speaking to our Bruce Rushton in May, the mayor said, “We have to take a different step to take the city forward.” Putting a homeless shelter where the homeless aren’t, adding another surface parking lot downtown and pissing off the east side looks like moving backwards to me, but I was never good at chess.

Or maybe they’re just making it up as they go along. Remember the city council granting Bluffstone zoning to permission to build whatever they want, thus throwing away the lever they could use to pry a better building out of the company? Or the mayor’s changing the rules for redevelopment proposals for the Y block after a local contractor whispered in his ear that he wanted to do something different? Instead of “creat[ing] a greater pool of developers interested in all or part of the block” (the mayor’s words) the pool was reduced from seven to two, one of whom was the local contractor, who in the end submitted a project for one corner of the block that might have been sophistication itself in downtown Girard but which fell laughably short of realizing the capital city’s ambitions for that space.

Sensible people believe that these failures might not have happened if city hall hired a planner dedicated to city of Springfield projects. The city of course has the services of first-class planners, but they work for the Springfield-Sangamon County Regional Planning Commission, which does planning on a contract basis for the city of Springfield. The city needs more accountability, it’s being said, and indeed a city-only planner could provide a service by giving mayors and aldermen someone to blame when they screw up.

Would a city planner actually improve planning? Maybe, but I doubt it. Salvation Army/Bluffstone/Y block were not the result of bad planning per se, but bad implementation. To do a better job, city hall needs not a certified planner but a development coordinator who would, among other things, keep property owners like the Salvation Army informed about long-range development plans that might affect them.

In a talk to the Citizens Club on May 27, architect Paul O’Shea, who has made himself useful to his home city for half a century, harkened back to 40 years ago, when the city had its own planner and all was right with the world. I don’t remember things being quite that way in the 1960s and early ’70s; among the inheritances from that era were our university-in-a-cornfield and the Horace Mann headquarters, which was built to end blight on the north end of downtown but has become the biggest cause of it. (See “Anti-urban urban renewal,” July 28, 2011.)

Better projects were done a decade later under the direction of the same regional planning operation that is being damned today. Look at Near North or Lincoln Square and compare them to the barracks that Bluffstone is building at Fourth and Madison; the earlier projects are superior architecturally and urbanistically. What changed since Lincoln Square was built was not the city’s planning process but the nature of those politicians. Planners can only prescribe; it is the politicians who decide. And Springfield back then had better people on the city council, or rather it had a better kind of city council under its commission government. Since the switch to aldermanic government, the quality of decision-making and consequently of the built city has declined. This lot couldn’t have made a bigger mess of things if they’d planned it.