It all began with a napkin.

The international food-processing company Archer Daniels Midland was paying $250 per shipping container to transfer its goods between two railroads in Decatur, and they were looking for a way to cut that cost. Scott Fredericksen, ADM’s president of transportation, and Mark Schweitzer, then the company’s director of intermodal freight, began sketching out a solution on a napkin. What started as a simple doodle has developed into a 280-acre facility capable of shipping freight across the globe. It is part of a powerful economic development tool benefitting the whole region.

The Midwest Inland Port is a collection of sites in and around Decatur devoted to transporting goods and materials to and from the rest of the world. While ports are usually located on water, the Midwest Inland Port is linked to the U.S. coasts by rail, giving it the potential to make central Illinois a transportation hub while offering new business opportunities to communities surrounding Decatur.

For years, Decatur has worked to rehabilitate its image of a manufacturing town left in the dust as the U.S. economy increasingly becomes rooted in services instead of industry. The signature “Decatur smell” emitted by global food-processing company ADM has long been a source of mockery for people outside of Decatur, but that soybean-processing odor represents a strong economic force, and it is now taking on the scent of a new opportunity. 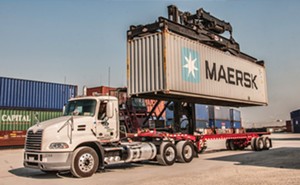 Illinois plays a major role in the transportation of goods across the nation. The state has the second largest rail system in the U.S. with more than 7,000 miles of railroad tracks, according to the Illinois Department of Transportation. It’s third for the most public road miles at 144,300 and third in freight tonnage with more than 1.2 billion tons passing through the state annually. Illinois has more than 7,200 trucking companies, more than 40 railroads, and one of the world’s busiest airports – O’Hare International Airport – serving dozens of freight airlines and carrying nearly 1.6 million tons of cargo in 2014. Transportation and warehousing employment in Illinois ranks third nationwide, with an annual payroll of $9.9 billion.

Much of Illinois’ freight transportation prowess is due to Chicago, which is the busiest rail hub in the U.S. The Chicagoland region handles a quarter of the nation’s freight rail traffic, with about 500 freight trains passing through every day. Seven interstate highways meet at Chicago, more than any other city in the nation, making it a crossroads for truck freight. Chicago is also a port of call for ocean-going cargo ships, thanks to Lake Michigan.

However, Chicago is also a chokepoint for freight because of the massive volume of goods entering and leaving the city at any given time. In the next 30 years, the demand for freight rail service in Chicago is expected to nearly double. Statewide, the Illinois Department of Transportation projects that Illinois will handle 1.7 billion tons of freight by 2040 – more than a third of the nation’s total freight tonnage.

“Chicago is a hot mess,” jokes Allison Fayfich, a transportation logistics coordinator for ADM. She says getting a truck from one point to another in Chicago can take anywhere from 30 minutes to three hours, and that kind of unpredictability and delay poses real problems for companies depending on a shipment.


The Chicago bottleneck creates an opportunity for central Illinois to position itself as a transportation hub capable of reaching the entire world. While the Department of Transportation studies how to fix the bottleneck, companies are already looking for alternatives to shipping goods through Chicago, and Decatur hopes to attract some of that traffic.

“We don’t want to lose it to Indianapolis, to Memphis, to Kansas City and so forth,” Bennett said. “We have to do something if Chicago is going to be congested because, at some point, that freight is going to find another path. We’re hoping that here in central Illinois, we can help alleviate some of that so it doesn’t have to go through Chicago.”

Those involved with the Midwest Inland Port are quick to point out that it’s not just one physical address; instead, it’s more of a marketing concept. The port is a collection of existing transportation-related facilities and sites ready for development in the Decatur metro area. It’s jointly developed by a consortium of companies and the Economic Development Corporation of Decatur and Macon County. The crown jewel of the port is ADM’s Intermodal Ramp, a 280-acre facility dedicated to transferring shipping containers – standardized 53-foot-long steel boxes – from trucks to trains and vice versa.

Allison Fayfich believes so strongly that the Intermodal Ramp and the Midwest Inland Port as a whole represent a game-changing innovation that she quit her previous job with a railroad and went to work for ADM to help develop the project. She often leads tours of the Intermodal Ramp, which isn’t actually a ramp, but rather a section of railroad track surrounded by 18- to 22-inch-thick concrete which supports shipping containers weighing up to 120,000 lbs.

Fayfich explains that, as trucks arrive at the ramp, an automated system of cameras photographs each shipping container to record serial numbers and any preexisting damage. A large, mobile crane moves the shipping containers onto trains heading to ports like Los Angeles and Norfolk, Virginia, where they are picked up by large cargo ships and sent to places like Indonesia, China, Canada, the Netherlands and a handful of African nations. The containers are filled with everything from fructose and processed protein to machinery and waste paper, Fayfich says, adding that waste paper is the United States’ number one export.


Right now, the Intermodal Ramp only handles international shipping and is operating at about 50 percent of capacity, but Fayfich says ADM is considering an expansion into domestic intermodal shipping for other companies, which could greatly increase the amount of freight passing through the Midwest Inland Port.

Jennifer Bennett, the ADM transportation analyst, says the inland port helps relieve congestion at coastal ports by allowing freight companies to spend less time separating shipments as they are unloaded from cargo ships. Instead, the freight can be hauled inland by train, where it can be broken up at the less congested inland ports and trucked to its final destination.

Ryan McCrady, president of Midwest Inland Port LLC, the private-public partnership overseeing the port, says the MIP is working to become a “point of entry” for international shipments through the U.S. Customs Bureau. Other than some marketing done by the Economic Development Corporation for Decatur and Macon County, the project has been privately funded, he said.

Although it is mostly marketing, the idea of a “port” neatly sums up what Decatur offers in terms of transport capacity, including service by three major railroads, several trucking companies and a 2,000-acre airport with a U.S. Customs office and the ability to accept wide-body aircraft. With easy, uncongested interstate access, trucks leaving the port can arrive at cities as far away as Minneapolis, Cleveland, Detroit and Little Rock within 10 hours, which is the limit for how long truck drivers can stay on the road at a time.

By marketing Decatur’s transportation capabilities as a port, the group has managed to create something that is more than the sum of its parts. Rather than being merely a city with a few trains and trucks, the port designation positions Decatur as a waypoint for freight.

Allison Fayfich, the ADM transportation coordinator, says the anticipated growth of the consumer economy holds opportunity not only for Decatur’s burgeoning transportation hub, but also for the surrounding communities.

“It is going to come, and we don’t want it to just be Decatur that benefits,” Fayfich said.

How can Springfield get a piece of the action? Fayfich says facilities that support trucking operations will soon be needed, meaning Springfield could easily host warehouses or “drop yards” where trucks drop off and pick up containers.

Larry Altenbaum, executive of the Midwest Inland Port, says the potential for development extends beyond warehousing. Because the port offers companies an easy way to ship their goods across the globe, high-demand industries like chemicals, machinery and manufacturing should be courted to set up shop nearby.

Ryan McCrady, Midwest Inland Port president, previously served as Sangamon County administrator until 2008. He says the MIP in Decatur is already working with communities like Champaign-Urbana to develop economic development plans that benefit each community, something he says can also happen with Springfield.

“We can be something that Springfield can offer up to businesses as a recruiting tool,” he said. “We can build a very profitable central Illinois region.”

The Midwest Inland Port is also part of a larger joint effort by the Economic Development Corporation of Decatur and Macon County, the City of Decatur, Grow Decatur and other groups to make the city workable, livable and attractive by addressing issues like housing, declining population, the city’s water supply, education, workforce development, beautification and more.

Springfield entrepreneur Bruce Sommer, who also serves as a visiting lecturer at the University of Illinois Springfield, attended the presentation on the Midwest Inland Port last week. He says the port adds a “valuable node” to the regional economic development network which should focus Springfield’s efforts on recruiting and growing local businesses.

“I think Springfield economic development organizations can take a couple pages from the Decatur playbook and start actively engaging with other regional economic growth generators, starting in central Illinois by clearly defining the value of what we can bring to the region and identify our aligned interests in collaborative action,” Sommer said.

Jeffrey Sommers, a principal at Square Root Architecture + Design in Springfield, says what he took away from the presentation was less about the port itself and more about the cooperative effort it represents. By focusing on “livability” issues like housing and urban planning, Sommers says, Decatur is addressing the most important aspects of building a sustainable community.

“We’re not planning on replicating the Midwest Inland Port here, but I think that if we’re going to talk about creating a city that’s attractive to businesses and potential residents, those livability issues are what we should be focusing on,” he said. “I just feel like that’s the paramount issue behind all of this. Livability is economic development. It’s building a city for our citizens. When you do that, you build a place people want to live, spend their money and socialize. That’s what’s attractive to corporations.”

During the tour last week, state Rep. Sue Scherer said that the Midwest Inland Port has been working with and learning from a similar port in Joliet.

“They’re working in conjunction, not in competition,” Scherer said, adding that it should be the same way between cities in central Illinois.

“Products come here and can go anywhere in the world,” she said. “This is an opportunity for growth that we can’t look away from.”