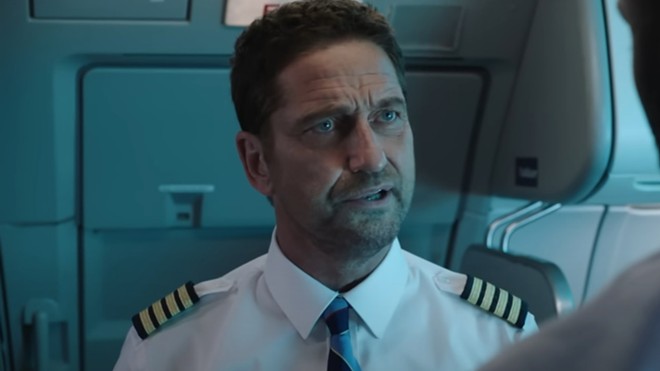 A throwback to the action movies of the 1990s, Jean-Francois Richet's Plane is the sort of movie popcorn was invented for. Not containing a single idea and reveling in its absurdity, the director knows he's covering well-worn material and decides to turn it up to 11. Gerard Butler is the dedicated pilot in charge of a plane that crash lands on an island in the Philippines, which happens to be occupied by a band of guerillas intent on holding them for ransom. Thankfully, Mike Colter is on board as a murderer being extradited, who happens to be really handy with a rifle.

Back in the day, this is the sort of fare Stallone and Schwarzenegger would crank out in their sleep, movies in which stuff would get blown up real good and salty quips would be dispensed with a seriousness generating unintentional, intentional laughter. Plane does the same with reckless abandon, the difference being Butler and Colter are given the chance to bring a bit of humanity to their roles that helps elevate this from standard shoot-em-up fare. It's not great, but there's no denying it's fun. In theaters.

Much has been made of Brendan Fraser's performance in David Aronofsky's The Whale, and rightfully so. Though it would be easy to say that the mountains of latex the actor is buried under does most of the work, that would be a mistake. Fraser's ability to convey the pain his character Charlie carries like some self-inflicted millstone is astounding. He uses his eyes, his voice and his labored movements to poignant effect, creating a portrait of self-destruction on par with Nicolas Cage's turn in Leaving Las Vegas. He commands the screen and is the prime reason to see the film.

I just wish his fine work was in service of an equally well-written movie. Though screenwriter Samuel Hunter won awards for his play, which he adapts here, I felt as though it relies too heavily on coincidence far too often to be credible. A troubled missionary (Tyler Simpkins) who just happens to knock on his door and take it upon himself to save Charlie screams "narrative conceit," Sadie Sink as his daughter gives a shrill, one-note performance that grates rather than moves, and don't get me started on the strained Moby Dick metaphor. This improbable story doesn't ring true, but Fraser's performance does, and for some that may be enough. In theaters.

Nicolas Cage has made a career out of being Nicolas Cage. You'd be hard-pressed to name an actor whose off-screen life and on-screen persona have blurred so much you can't tell where one ends and the other begins. See Unbearable Weight of Massive Talent for confirmation. Over the course of this transformation, critics have allowed him a pass where his performances are concerned, his post-modern approach to each role negating any disapproval that might be leveled against him. However, with his new film, The Old Way, all bets are off. The actor gives a truly lazy performance, one that conveys apathy more than anything else.

One part Unforgiven, one part True Grit, Cage is Colton Briggs, a former bounty hunter trying to live a quiet life as the owner of a general store. However, this is all disrupted when a gang raids his home and kills his wife. Briggs hits the vengeance trail, reluctantly toting his daughter (Ryan Armstrong) along, screenwriter Carl W Lucas making sure they encounter every genre cliché along the way. There’s nothing wrong with a movie covering familiar narrative territory – most of them do – but the tepid way this story is told lets us know that all involved showed up for a paycheck before moseying along to their next project. In theaters and available through VOD.