Pinky and his martini came to Springfield 45 years ago 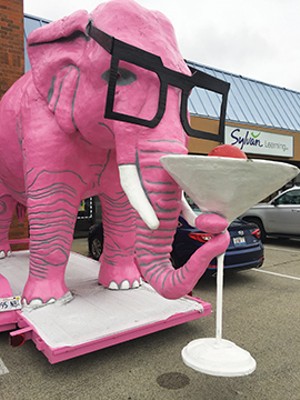 The story, Kent goes on to tell, began around 1972 with his father, Bob Kent Sr., a well-known businessman and Shriners Club member in Springfield.

“His travels for the Shriners took him all over Illinois. There was one restaurant lounge around Paris, Illinois, that hosted a lot of different meetings. Over the years, my dad became friends with the owner, who had a giant pink elephant out in front of his restaurant,” Kent explained.

“On one visit, he asked my dad to borrow $2,000. My dad told him he didn’t loan money to friends, but it really bothered him. He couldn’t stop thinking about it. At the end of the meeting, he went back to the guy and said the one thing he always wanted to do was rent a pink elephant for one year, for $2,000,” Kent said.

“He wanted to help his friend,” Kent said.

And so, Bob Kent Sr. brought the giant elephant his family would name Pinky to his new home at Finest Liquors, located on Wabash Avenue.

“The store is long-gone now, but Pinky was a huge success right from the beginning,” Kent said.

“No one around here had ever seen a pink elephant, especially one drinking a dirty martini,” he added.

Here is where the story gets a little dicey. According to Kent, within the one-year rental period, the Paris restaurant burnt down and his friend was charged with arson and filed bankruptcy.

“By that time, everyone had grown to love Pinky, so my dad sent his lawyer over to Danville to go to federal bankruptcy court over this elephant,” Kent said.

The attorney, he said, worked a deal enabling the Kent family to purchase their prized Pinky out of bankruptcy.

“We got him out of the elephant pound and he’s been ours ever since,” Kent said with a proud grin.

Over the next 44 years, Pinky has been in countless parades, fundraisers, birthday parties, receptions and events of every kind.His presence has not only brought joy to the partygoers, but resulted in thousands of dollars in donations over four decades.

“If someone wants to rent him for an occasion we charge a $100 check made payable to the Shriners Hospital in St. Louis,” Kent said.

It hasn’t all been smooth sailing for the giant mammal.

“Two years after he got him Pawnee high school used him for a homecoming parade and they went under a bridge and literally cut him in half,” Kent said.

“He was blown over in a windstorm. He’s been stolen twice,” Kent added.

And how did he return?

“The police found him, of course. I mean, how do you hide a giant pink elephant?” Centeno said.

Perhaps Pinky’s most memorable presence, at least for the Kent family, came in 2009, during Bob’s final farewell to a town he loved.

“He led the funeral procession when my dad died. It was the hearse, Pinky, family, then friends,” Doug said.

Old Pinky is under lock and key these days, posted up in Town and Country Shopping Center, owned by Doug. He moves about the center’s parking lot, often sitting off the highway on South Sixth St., or outside Doug’s restaurant The Burger Bar. Wherever he is, Centeno can usually see him from the window of her bridal store, Gowns.

“He’s a mascot for Springfield; an icon of this town,” Centeno said.

“But, more than anything,” Centeno said, “Pinky’s family. I wouldn’t have it any other way.”

Whitney Barnes of Springfield can be contacted at whitneyleighbarnes@gmail.com.