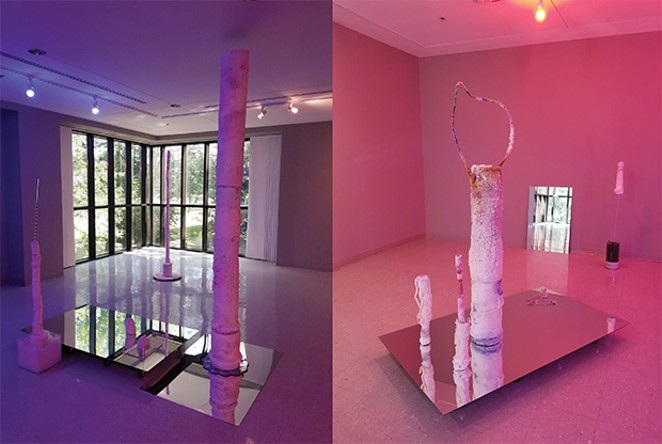 “The objects made from salt take many years to grow,” Bowles said in an interview conducted on the day of the exhibit’s initial opening on Aug. 27. “This is my first solo show in four years and the public debut of all this work.”

She characterized her practice as an artist as studio-centered, and said she finds the process of finding ways to arrange the items spatially in a gallery to be both nerve-wracking and enjoyable. “I was excited to play with color and space and light and working to make an exhibit that’s immersive but also discrete and navigable.”

The theme of the work has to do with clouds – both the literal and internet type – and both are represented in the show in the form of painted boxes and glowing tubes. “I think a lot about the collision between the virtual and physical and where those spaces touch, where connections and disconnections happen within that feedback loop mechanism,” she said. “This work started with me thinking about the question, ‘Where is the internet?’ And the internet is both in the cloud and in tubes underground.”

Creating objects from salt has prompted a wide range of reactions, which are sometimes more visceral than strictly aesthetic or analytical. “People often want to touch my work,” she said. “Or lick it or smell it. It’s exciting to me that my work elicits that. I think of the objects as being energetically alive because the salt itself continues to react indefinitely.” The fact that this process is extremely gradual is part of the point, as life in the online age seems to get faster every day. “Time, in my opinion, is exponentially speeding up,” she said “The salt, for me, is an overt pursuit of the radically slow.”

A reception for “digital dusk shadow storage” will take place on Thursday, Sept. 6, from 5:30 to 8 p.m. The show will remain on display through Thursday, Sept. 20. The Visual Arts Gallery is located on the UIS campus in the Health and Science Building, Room 201, and is open Monday through Thursday 11 a.m. until 6 p.m. For more information, visit www.uis.edu/visualarts/gallery, call 206-6506 or email alach@uis.edu.