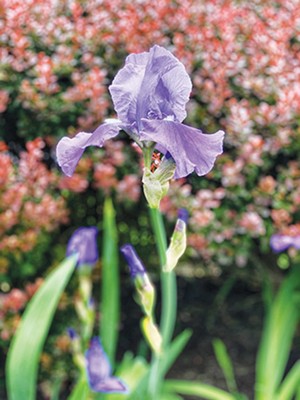 Perennials are flowers, vines and ornamental grasses that are planted once and continue to return each year, gracing our gardens with beautiful color throughout the spring, summer and fall. The National Garden Association reserves the term perennial for plants that live more than two years.

Perennials frequently seen in central Illinois include purple coneflower, hosta, peony, iris, hydrangea and black-eyed Susan, to name just a few. Horticulturists divide perennials into two categories: woody plants and herbaceous perennials. Woody plants have stems that do not die back and instead grow with each season. Trees, shrubs and some vines are considered woody perennials. Hydrangea is an example of a woody perennial that keeps its woody stem through the winter and produces new flowers each spring on that existing stem. Herbaceous perennials such as coneflower, hosta and black-eyed Susan, have more delicate stems that die back to the ground at the end of the season, leaving the roots to survive the winter. New growth comes forth from the ground in the spring.

Once a perennial has been planted, it requires very little maintenance: sunlight, water and perhaps some slow-release fertilizer. Once established, their roots spread underground and the plant itself spreads, sometimes taking over a large portion of the garden. A perennial will tell you when it's ready to be divided. According to the University of Illinois Extension Office, a perennial is ready to be divided when you see one or more of these signs: reduced flowering or smaller flowers, a hole that has developed in the center of the plant with growth only around the edges, the plant flops and needs staking, it loses its vigor or it has just outgrown its bounds.

Dividing is a simple process that can be accomplished using a shovel, a sharp knife or spade and a new spot for transplanting. Candace Scheuermann, garden center manager at Green View, 3000 W. Jefferson St., said dividing perennial plants is the best way to create another garden for yourself or someone else — absolutely free! She recommends dividing woody plants, shrubs and trees when they go dormant, which is when their leaves fall off and the plant is asleep for winter. Scheuermann said it is safe to divide herbaceous plants such as bee balm, coneflower, flox and iris at the end of summer to early fall.

Mark Moscardelli, landscape manager and designer at Pleasant Nursery, 4234 W. Wabash Ave., said the ideal time to transplant perennials is March and April, but if you have to transplant in the fall, do so in September and October. Reduce stress on the plant by cutting foliage to the ground, dig out the entire plant and take a spade or pitch fork and section the plant apart from core, making sure the sections are no smaller than the size of a softball. Mix compost into the existing soil. Sheuermann cautions against using "compost that is too perfect because the roots need to work in order to expand" in their new space. She suggests using one part compost to two parts original soil. Return a section of the plant to the hole and fill it with enriched soil. Tamp it down with a shovel in order to reduce air pockets. Moscardelli recommends using root stimulator and keeping the transplant moist by watering every other day throughout the remainder of the fall.

Sheuermann said irises and daylilies like to be dug up and divided in order to refresh for the following spring. Perennials such as these can grow to a point where they dominate a garden. Moscardelli said, "You want a community of plants in your garden. In order to keep a variety of species, put some transplants in plant liners and share with neighbors and friends." He suggests thinking of your garden like crafting a piece of art.

Perennials require very little maintenance for the amount of beauty they provide each and every year. Now is the perfect time to divide your garden and brighten someone's day with the gift of a perennial.

Holly Whisler is a freelance writer from Springfield who is looking forward to dividing some of her perennials this fall to share with others.