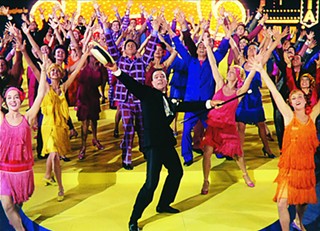 “I've actually talked about that quite a bit lately,” said Gene Kelly’s widow, Patricia, after I asked her if her late husband was ever aware he was making something special while filming his seminal musical, Singin’ in the Rain. “This notion about what Gene wanted for this movie was very simple. He said people would ask him what the point of it was, or what did the movie mean. Is it really about McCarthyism? He said no, it's to bring joy. I think maybe now we understand that even better than we did before.”

Though our conversation was ironically occurring on a rainy day, Kelly’s spirits were far from dampened, as she appeared eager to talk about the film classic, displaying a sense of enthusiasm that belied the fact she’d probably answered questions like mine hundreds of times. Yet her exuberance for the subject was obvious as Warner Brothers had arranged a series of interviews with her to coincide with their release of Rain on the 4K home video format to celebrate its 70th anniversary.

In heavy rotation on network television for years, a perennial on Turner Classic Movies, almost always included in futile lists devoted to the greatest movies ever made, the film has always been readily available. (Next time you’re on a plane, check out your airline’s in-flight viewing options. Like as not, Rain will be there, one of the very few choices from Hollywood’s Golden Age.) This phenomenon hasn’t escaped Kelly’s notice.

“Gene didn't like the notion that he was working in a magic factory,” Kelly continued. “He said it was a factory, but you were just churning stuff out, steadily making beautiful, magical movies. There was never the notion that people would be watching these films in 70 years. It was just a product. There was no notion that there would be DVDs and the other formats that developed. He said the only one who thought Rain might have legs was the writer, Adolph Green, and he was right.”

While many consider Rain the greatest musical ever made, it surprisingly received mixed reviews on its initial release as it suffered in comparison to An American in Paris, Kelly’s previous film which took home the 1951 Oscar for Best Picture.

“American in Paris always held a special place in Gene’s heart because of the ballet and what he was able to do regarding the choreography. Yet, later in his career whenever he came out on stage, they would play Singin’ in the Rain’ which he thought was kind of cute,” Kelly recalled.

Of the many stories that have come out of the making of Rain, some of the best-known revolve around Kelly’s relentless pursuit of the perfect dance routine, driving his co-stars to the point of exhaustion. Starring in her first musical at the age of 19, Debbie Reynolds was one day found crying under a piano in a neighboring set by Fred Astaire, who assured her the hard work would pay off in the end. Even Kelly acknowledged his demanding approach in later years, stating, “It’s a wonder Debbie Reynolds still talks to me.” I asked Patricia about her husband’s reputation as a taskmaster.

“Taskmaster!” she yelled in false horror. “You got that word off the internet! You know, during his life, they started to refer to Gene as a ‘perfectionist,’ like it was a bad thing. I don’t know a professional who’s not a perfectionist. He would say, ‘When you go to the surgeon, do you ask for the sloppy guy?’ Really, this idea depends on the person you ask. If you ask a dancer or choreographer, a sound engineer or a musician, they wouldn’t call him a taskmaster. All the people I spoke to that worked with him mentioned how generous he was. Yes, he was tough, but he was dedicated to the craft and was as hard on people as he was on himself.“

Thankfully, Kelly was able to see Rain accepted for the masterpiece it is, and I asked Patricia why she thought this reevaluation occurred. “I think what happens is the critics drop away and the people come forward. The people just love it, and I think that goes for people of every age and demographic throughout the world. It’s contemporary. The colors are bright and vibrant. And the humor is the thing. I think if the humor ends up seeming dated, then the movie goes by the side. But the humor in it is as funny today as it was when it was released.”

Not simply the humor, but everything about Singin’ in the Rain seems as fresh as it was 70 years ago, a testament to the craftsmanship, imagination and tenacity that went into its making.

“The hard thing is to create something contemporary and timeless,” said Kelly. “Gene was always trying to push boundaries. He was way ahead of his time in his thinking. The dance is still current. People are constantly trying to imitate it, or say it’s their inspiration, and that’s not what he wanted. He would say, ‘Don’t imitate what I did. Take what I did and go beyond it.’”

This has proven to be a high order, one that filmmakers have yet to accomplish.

The new 4K Ultra-High-Definition Blu-Ray Combo pack of Singin’ in the Rain was released by Warner Brothers on April 26, 2022.