Nepotism, politics and a baby 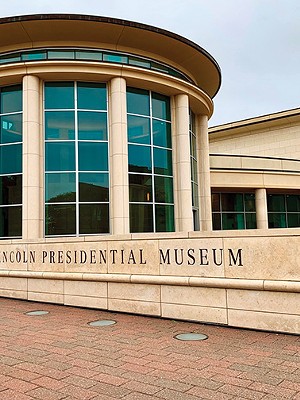 The hits – or rim shots – just keep coming at the Abraham Lincoln Presidential Library and Museum, where a baby shower was held this spring for acting director Melissa Coultas, whose husband got a gig at the ALPLM last year after doing campaign work for a state senator.

Coultas has worked her way up. She started out as the museum's human resources director in 2017, then became chief of staff last summer, replacing Nadine O'Leary, who was herself once acting director of an institution that has employed four permanent directors since opening in 2005, plus a series of temporary heads. O'Leary landed at the Illinois Department of Public Health. After one month as chief of staff, Coultas last fall became acting director when Gov. JB Pritzker fired director Alan Lowe for loaning the Gettysburg Address to an alleged museum in Texas, where it was entrusted to conservative talk personality Glenn Beck and an erstwhile server from Plucker's Wing Bar.

Coultas would seem a perfect fit to lead a history museum with a history of ethical quandaries that have twice drawn the attention of the executive inspector general since 2018. Before coming to the ALPLM nearly three years ago, she labored more than seven years at the inspector general's office that ferrets out corruption and malfeasance in state government. By the end of her tenure, Coultas was the supervising analyst in the inspector general's division of hiring and employment monitoring, which investigates allegations of illegal patronage and other violations of state employment rules.

Outside work, the former Melissa Schaefer got married not long ago, updating her Twitter account in late 2018 to include a photo of herself in wedding gown along with John, her tuxedoed groom. Her name shows up as Melissa Schaefer Coultas, human resources director, in an ALPLM job announcement posted in December 2018. Within a month, she'd dropped Schaefer. The happy couple soon was expecting, with a baby due this month.

Coultas' husband got a job working on the library side of the ALPLM in January 2019, not long after the nuptials and on the heels of the 2018 election, during which state Sen. Andy Manar, D-Shoo-in, paid him more than $11,600 for duties described as "campaign work" in records held by the Illinois State Board of Elections. After four months of scanning documents, assisting patrons and performing sundry other tasks, John Coultas got a job at the Illinois Department of Financial and Professional Regulation, where he works as a legislative liaison.

Technically speaking, John Coultas didn't work for the ALPLM. Rather, he was an employee of Manpower, Inc., a temporary employment agency that has a contract with the state and sent him to the ALPLM while his wife worked as the institution's human resources director. Melissa Coultas seemed aware of appearances. "John Coultas was sent to me and I cannot approve his time," she wrote in an email to a Manpower executive and Lisa Horsley, director of library services, shortly before her husband departed the ALPLM for his legislative liaison gig at the Department of Financial and Professional Regulation.

Melissa Coultas could not be reached for comment. Manar says that he hadn't been aware of his former campaign aide getting a job at the ALPLM. If the institution had requested a specific employee from Manpower that resulted in someone getting an inside track, that would be problematic, the senator said, but he didn't know details of relationships between the temporary employment company and state agencies.

With Melissa Coultas elevated to acting director and expecting, the museum's staff held a March baby shower in an ALPLM multipurpose room. According to an invitation emailed to the institution's staff, the event was scheduled to start at 11 a.m. and last until 1 p.m., with attendees encouraged to bring food. The invitation included a link to Coultas' registry page at www.babylist.com for folks who wanted to give gifts. No rent was paid for the room. It's not clear who attended or how long they lingered, but timesheets show that Coultas and the shower's organizers were paid for a full day of work.

Chris Wills, ALPLM spokesman, says that any concern about a two-hour baby shower in a state building during a workday would be misplaced. The room, he maintains, wasn't otherwise being used, so it was OK to hold the event with no rent paid. "Every workplace in America uses office space to celebrate birthdays, congratulate newlyweds and welcome babies," he writes in an email. "The ALPLM and its employees are no different." A link to a baby registry included with invitations, he added, implies no obligation.

Steven Beckett, an Urbana lawyer who sits on the ALPLM board of trustees, says via email that he has no worries about the baby shower. "While I am concerned about the appearance of the Manpower hiring issue, I am satisfied it will not be repeated," he writes.