A history of floats promoting visibility and understanding 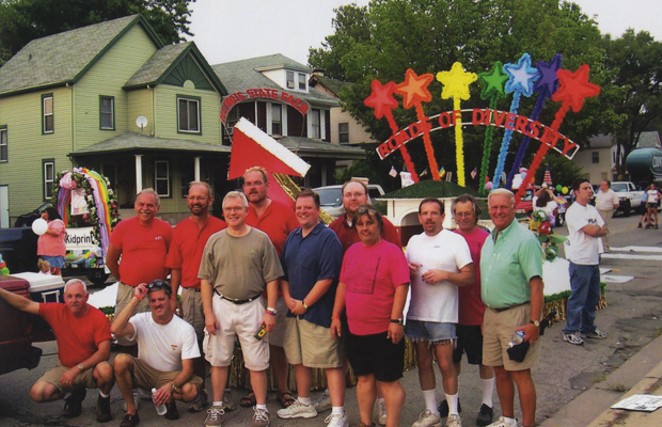 CORAL members with their 2005 State Fair parade float. The photo is included in Perhaps If You Saw One: A Story of Visibility, Understanding and Human Rights, published by the Coalition of Rainbow Alliances. It is available for $14.95 at Prairie Archive
Perhaps If You Saw One is a picture book of whimsical parade floats and enthusiastic participants. Published by Springfield’s Coalition of Rainbow Alliances, the book amounts to an informal history of activities of the gay and lesbian community over the past 13 years. Each photo layout is accompanied by a paragraph explaining the joys and challenges of that year’s Illinois State Fair parade float. It’s like a yearbook celebrating time well spent.

The title was born from a sobering conversation that took place in 2004. A gay constituent asked his local representative to support an anti-discrimination bill for LGBT citizens. The rep responded that he didn’t see the need because to his knowledge there were only two gay residents in the county.

This was reported to members of the Coalition of Rainbow Alliances (CORAL) which serves as an organizing body for central Illinois’ gay and lesbian groups. They wanted to do something to increase their visibility and do it in a fun, positive way that showcased their talents and initiative.

The group’s solution was to enter a float in the Illinois State Fair Twilight Parade in 2005. The parade is the fair’s kickoff event and draws a large crowd. That year the float was themed “Roads of Diversity, Roads of Fun” and presented a model of the main entryway to the fairgrounds, resting on a snow white platform, with a large red arrow shooting out and up. Flowers dotted the front and six rainbow stars lined the back. That first year there were a few people who turned their backs in protest as the float went by, but far more waved, cheered and clapped. That float won the Director’s Award.

It would be a tough act to follow, but the next year the group added a Rainbow Flag Corps that was 30 members strong. Practice began in the heat of summer, and there were a few near-misses as the members mastered the choreography and worked to avoid accidentally beaning their fellow corpsmen. Their efforts have paid off, as the Flag Corp has been awarded the Grand Marshal’s Trophy for Top Specialty Unit four times so far.

The group branched out, taking floats to the St. Louis Pride Parade, Springfield’s St. Patrick’s Day Parade, and transporting Santa in Springfield’s Downtown Christmas Parade in 2013. Each year was a challenge as the group collaborated to first conceive of the idea for a float and then execute it. There aren’t too many locations in Springfield that rent space with garage doors big enough to accommodate such a large structure, and also have the comforts of air conditioning, restrooms or a kitchen area to feed hard-working volunteers.

They managed to overcome a variety of obstacles to get the floats to the parade. In particular 2006 was a challenging year. The build location was not air-conditioned and was guarded by an aggressive dog, which meant the garage door had to stay down and the workers sweltered. The tow vehicle they had planned to use needed repairs three days before the parade. Then upon attempting to exit the garage, after the dog had been locked up, they realized the float was three inches too tall to fit through the door. The solution: the tires were deflated, the float was eased through, and the tires were reinflated. Then, while waiting for the parade to start, it began to rain, the first precipitation the city had seen in a month. Plastic was deployed and the float made its appearance undamaged. All that painstaking effort was rewarded when the two-section float, “Blooming Proud,” won the Governors Sweepstakes, the Grand Marshal’s Award, and the Lincoln Award for Romance of Illinois.

The float tradition will continue at the 2017 Fair Parade. That anonymous legislator, if he’s still in office, surely realizes his error now. The gay and lesbian community in Springfield is vibrant and active. Eleven years after that first entry there can be no question about it: if you’ve been to the Twilight Parade you’ve definitely seen them. You can’t miss those ambitious floats.

Shawna Mayer is a short story writer, poet and editor living in Springfield.”