Civil lawsuit filed against man acting as a sovereign citizen 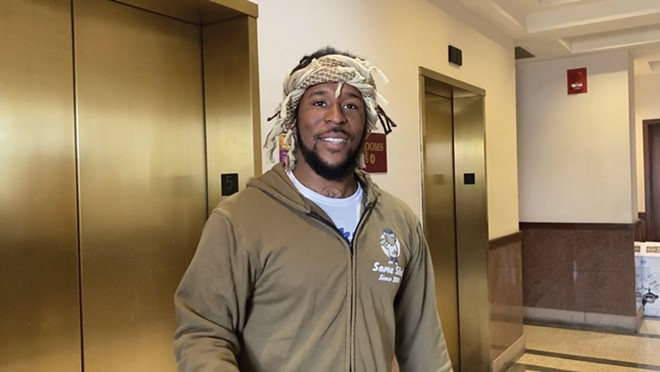 PHOTO BY DEAN OLSEN
Derick L. Turner, who told Illinois Times on May 24 that he doesn't consider himself a “sovereign citizen,” faces a felony charge for allegedly trying to place a fraudulent lien on the home of Sangamon County State's Attorney Dan Wright. The FBI says sovereign citizens often file fraudulent liens against public figures as part of “paper terrorism” to escape accountability for violations of law.

Sangamon County's top prosecutor and two of his assistants have filed a civil lawsuit to stop what they describe as harassment from a member of the right-wing, anti-government "sovereign citizen" movement.

And the Illinois Attorney General's Office on May 25 filed a felony charge against the Springfield man named in the suit, Derick L. Turner, alleging that he took steps to illegally place a lien against State's Attorney Dan Wright's home and any other property.

Turner, 31, hasn't yet been arrested on the charge, a Class 4 felony that carries a potential sentence of one to six years in prison.

He has been on supervised release since October 2020 after serving two years of a five-year federal prison sentence for aggravated identity theft, conspiracy to commit bank fraud and sale of a stolen vehicle. He was serving a concurrent five-year sentence on a state charge of unlawful possession of a weapon by a felon.

The lawsuit filed by Wright and his assistants appears to be one of the first instances in which county-level governmental officials in Illinois have taken steps to discourage what the FBI has labeled "paper terrorism."

Paper terrorism involves the filing of "fraudulent liens and frivolous lawsuits against public officials," according to a 2014 article in the North Carolina Law Review. "Sovereigns file liens as a method of intimidating public officials to keep them from bothering sovereigns in the future," the law journal article says. "Others seem to file liens out of spite or anger when their legal strategies do not work."

"Sovereign citizens" believe they are exempt from most laws, regulations and tax codes. The Southern Poverty Law Center says non-violent and violent crimes by supporters of the movement have grown in recent years and "continue to spread like a prairie fire."

The Alabama-based center says more than 40 law enforcement officers across the country have been murdered since 2005 by sovereign citizens and other "domestic extremists."

Most cases of paper terrorism don't escalate into violence, according to Christine Sarteschi, a Chatham University assistant professor who has studied the movement.

The fraudulent liens, which often cite abstract violations of state and federal laws governing commerce, are "never successful," she said.

"They're problematic because they are causing problems for people," she said, adding that sovereign citizens are "convinced that their specific loophole will work."

A 2022 ruling by Illinois Appellate Court judges in the Second District says Illinois and federal appellate courts have found that sovereign citizens' claims often have "no conceivable validity in American law."

The ruling said many of the arguments are "frivolous and non-constitutional and have been also deemed sanctionable in a civil context as they waste the time and resources of the litigants, judges, law clerks, librarians and court clerk's office."

The FBI says sovereign citizens are part of a "domestic terrorism movement" and have had well-known members such as Terry Nichols, who helped plan the Oklahoma City bombing in 1995.

The sovereign citizen movement has roots in white supremacy and anti-Semitism, though there are Black people who consider themselves Moorish sovereign nationals, known as Moors. The Moors emerged in the early 1990s, according to the Southern Poverty Law Center.

The lawsuit against Turner, who is Black, was filed May 23 in Sangamon County Circuit Court and says he believes he is not subject to prosecution for alleged violations of Illinois law involving five traffic and misdemeanor offenses in 2020 and 2021.

The violations range from speeding and driving on a suspended license to unlawful possession of marijuana and illegal transportation of alcohol.

Turner, representing himself without a lawyer, presented a rambling legal defense of the violations and the civil lawsuit in a May 24 court hearing and said he was "quite intimidated" by Wright and by Associate Judge Christopher Perrin.

Turner told the judge several times he disagreed with the way the cases were being handled.

"My time is being wasted, sir, so at this point could you please for the record make the record, so I'm going to go ahead and dismiss this case, and I'm going to walk out of this courtroom," Turner said, according to a certified transcript of the hearing.

Turner added, "If you refuse discharge, discharge still has occurred, sir, so I'm going to consider this case settled, and we'll deal with this privately, Mr. Wright."

Wright asked the judge to hold Turner in contempt of court for "attempting to make a mockery" and "harass" the court and law enforcement officials.

Perrin didn't act on the request and set a June 13 hearing as Turner's traffic and misdemeanor cases head toward a jury trial. The state attorney general's office has been appointed as special prosecutor to handle all of Turner's pending cases.

After the hearing, Turner told Illinois Times that he isn't a sovereign citizen and hasn't engaged in paper terrorism.

"I just want public officials to stand within the bounds of their oaths of office and uphold the rights of people," he said. "I'm not doing anything wrong.

"There's no such thing as a sovereign citizen," he said. "A sovereign is subject to no one; a citizen is."

Turner told the newspaper that the allegations against him are designed to "defamate (sic) my character and make people like you think I'm that I'm a paper terrorist. ... If I did any wrong, lock me up. ... If I did anything wrong, why am I not in jail?"

Turner's documents purport to constitute a "lien in the amount of $100,000 against all 'real and movable property' of the 'debtors'" even though the lawsuit says Turner's argument "is not recognized as a legitimate legal theory by the courts of this state or the United States." According to the suit, Turner filed the documents after he sent Wright a notice in November that said the debt would be incurred unless the five traffic and misdemeanor charges were dropped.

The civil lawsuit asks that Turner be permanently barred from taking action to collect "fraudulent and invalid claims of indebtedness" against Wright, Botts and Johnson and not be allowed to file any documents with county officials without a judge's permission.

The suit also asks that documents filed by Turner be expunged and that Wright, Botts and Johnson be awarded a total of at least $30,000 in damages.

Unlawful "clouding" of a property's title was made a felony by the Illinois General Assembly in 2014 to discourage paper terrorism by sovereign citizens, an article in the Illinois Bar Association's journal says.

Also pending against Turner are 2022 felony charges of manufacture/delivery of cannabis and obstructing justice in connection with an April 2 traffic stop in Springfield by Illinois State Police.

An ISP report said the stop resulted in seizure of more than 60 grams of cannabis, a scale with cannabis residue and an open bottle of tequila that an underage passenger in the vehicle said was purchased by Turner with her credit card.