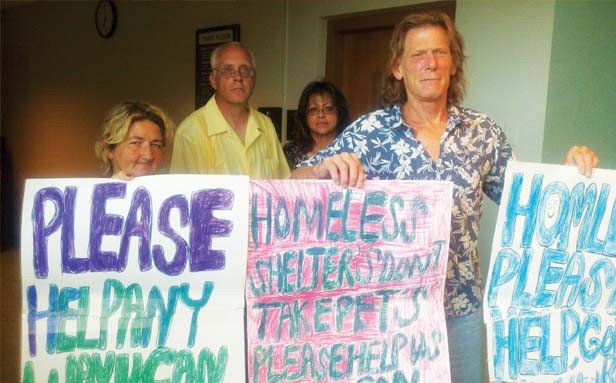 Two Springfield panhandlers filed a federal class action lawsuit against the City of Springfield and a handful of city police officers on Tuesday, alleging the city and the officers violate panhandlers’ right to free speech by ticketing and arresting them.

Don Norton and Karen Otterson, both of Springfield, often panhandle for money in and around the downtown historic district. A city ordinance prohibits panhandling “by vocal appeal,” but Norton and Otterson claim to only use signs to solicit donations. Despite using signs instead of their voices, Norton and Otterson claim to have each been ticketed and arrested several times by certain Springfield police officers. Their class action lawsuit, filed in federal court late Tuesday, seeks to prevent further enforcement of the ordinance and to have the ordinance thrown out entirely.

Norton and Otterson have addressed the Springfield City Council on several occasions, warning that they would fight the ordinance.

Attorney Mark Weinberg of Chicago filed the lawsuit on behalf of Norton and Otterson. Weinberg says the city’s ordinance and method of enforcement is an effort to “slowly, drip-by-drip, violate peoples’ constitutional rights.”

“It’s basically been established that panhandlers have a constitutional right to be on the public sidewalks,” Weinberg said, referring to a 1979 U.S. Supreme Court case titled Schaumburg v. Citizens for Better Environment. Weinberg notes that Schaumburg dealt with a group soliciting charitable donations, but lower courts have interpreted the case to cover panhandlers. “Now what municipalities are doing and what the law is arguing over is what kind of restrictions you can place on those rights. Springfield’s restrictions – I’ve never seen one (an ordinance) that has blanketly prohibited vocal appeals or requests for immediate donations in total.”

Weinberg said vocal appeals for donations is protected speech under the First Amendment.

The lawsuit also alleges that Springfield police officers regularly ticket and arrest panhandlers under a state law that prohibits solicitation on highways. The lawsuit claims the City of Springfield has trained officers to interpret the sidewalk as part of the highway under the state law, which allows the city to cite panhandlers even when they’re not in the roadway.

Acting Springfield Police chief Kenny Winslow was out of office and could not be reached for comment before publication. The Springfield Police Department was not named as a party in the lawsuit, but five police officers were named individually.

City spokesman Nathan Mihelich said via email that panhandling is "one of the most perplexing challenges facing Springfield."

"On the one hand, many people who panhandle are not only homeless, but also suffer from mental illness and addiction,” he said. “On the other hand, by definition, panhandling is unlawful.  It can be a public nuisance.  It places our residents and guests in uncomfortable situations.”

Mihelich said the city is open to working with groups to find alternatives to a ban, but filing a lawsuit “is not a path to those alternative solutions.”

“The city’s ordinance is reasonable and logically seeks to limit the public health, safety and welfare impacts of panhandling,” he said. “At the time the ordinance was drafted, the city’s legal department determined it was appropriate; similar ordinances in other jurisdictions have been upheld.”

Springfield Ward 5 Ald. Sam Cahnman sponsored the panhandling ordinance when it passed the Springfield City Council. He said he researched the case law before proposing the ordinance, including a 1999 federal appellate case called Smith v. City of Ft. Lauderdale Florida, which held that cities can ban panhandling in specific areas.

“It is my opinion that the ordinance as written is clearly constitutional and not violative of the 1st Amendment,” Cahnman said.

Weinberg said fliers posted downtown referring to the panhandling ordinance are misleading. The fliers say panhandling is prohibited, but Weinberg says that is untrue because the city’s ordinance specifically exempts “passively standing or sitting ... with a sign ... without any vocal request.”

The lawsuit seeks an injunction against the city enforcing the panhandling ordinance, as well as dismissal of the ordinance itself. The lawsuit also asks the court to prevent Springfield police officers from ticketing or arresting panhandlers on sidewalks under the state law regarding highways.

Weinberg says the case is important not only for panhandlers, but because it pits business interests against those who need assistance.

“The city has made no bones about wanting to rid the downtown historic district of panhandlers, and the reason for doing so is because businesses don’t like them,” Weinberg said. “The courts have made pretty clear that merely favoring commercial interests is not a valid state interest for undermining constitutional liberties. … As a community, we should hold dear the liberties our Constitution provides us, and that includes for marginalized groups that we don’t like.”