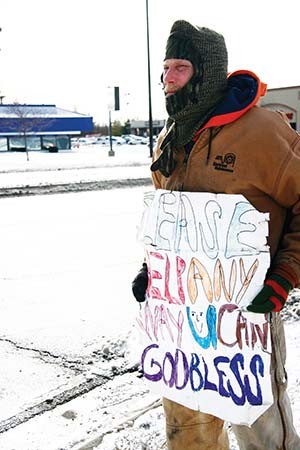 The panhandlers seek to have the City of Springfield’s ban on panhandling downtown struck down as a violation of the First Amendment right to free speech. The case hinges on whether the ordinance unfairly targets panhandlers over other groups, and it could affect anti-panhandling laws in other cities nationwide.

Don Norton and Karen Otterson of Springfield filed their lawsuit in September 2013 on behalf of themselves and other panhandlers in the city. They claimed not only that the city’s panhandling ordinance is unconstitutional, but that the city harasses panhandlers even outside of downtown and willfully misinterprets a state law regarding sidewalk usage.

The ordinance prohibits “vocal appeals” for donations within the city’s downtown, though it does not prohibit the use of signs or performances to solicit donations if no vocal appeal is made.

Norton and Otterson asked Judge Richard Mills of the federal Seventh Circuit court in Springfield to approve a preliminary injunction barring the city from enforcing the panhandling ordinance during the legal proceedings of their lawsuit. Mills denied the injunction request in October 2013, reasoning that he didn’t have enough information to tell whether the city meant to specifically target panhandlers.

“Based on the current record, the court is unable to conclude the city adopted the regulation of speech because of disagreement with the message it conveys,” Mills wrote. “The ordinance does not prohibit vocal appeals for immediate donations throughout most of Springfield, which would appear to cast doubt on the assertion that it was adopted due to a disagreement with the type of speech.”

Last week, Mark Weinberg, a Chicago attorney representing Norton and Otterson, filed an appeal with the Seventh Circuit Court of Appeals in Chicago, asking the court to overturn Mills’ ruling and grant a preliminary injunction or even rule the ordinance unconstitutional outright. He argued in the appeal that the ordinance targets panhandlers, but even if that wasn’t the intent, it still has the effect of discriminating against panhandlers.

If the appellate court rejects the panhandlers’ arguments, they will likely still have a chance for a trial in the circuit court, because Mills’ first opinion only ruled on whether to grant the preliminary injunction. The next hearing in the case is expected to be sometime in February in Chicago.

Matthew Trapp, an attorney for the city, could not be reached for comment. Former acting corporation counsel John Mehlick resigned in November, and Springfield mayor Michael Houston has appointed attorney Todd Greenburg to fill the role, but the city council only approved Greenburg on Tuesday.

Michael Stoop, director of community organizing for the Washington, D.C.-based National Coalition for the Homeless, says his group plans to file a brief in support of Norton and Otterson. Stoop notes that not all homeless people are panhandlers, and not all panhandlers are homeless. Norton and Otterson are currently not homeless, but they have been in the past. Still, homelessness and panhandling are both common among people living in poverty or very close to it.

“Anti-panhandling laws are nothing new,” Stoop said. “Cities have been enacting such ordinances for years, and their ultimate goal is to rid the downtown of homeless individuals. It never solves the issue because the problem is homelessness, not hordes of people panhandling. Communities spend too much time dealing with the wrong issue.”

The National Law Center on Homelessness and Poverty also filed a brief yesterday arguing in favor of the panhandlers.

Stoop says Norton and Otterson’s case may affect how other cities nationwide write ordinances regarding panhandling. He notes that Springfield’s own ordinance is modeled after ordinances in other cities.