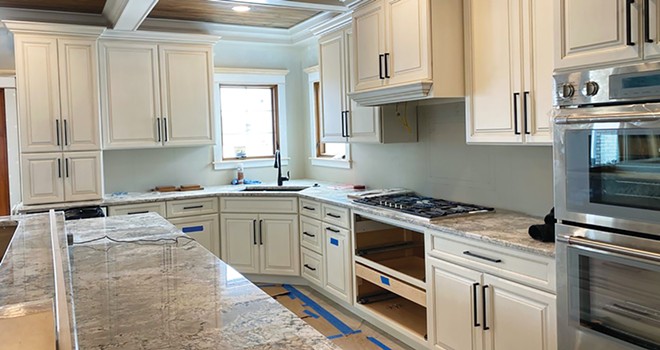 PHOTO COURTESY OF BURASKI BUILDERS
A kitchen remodel by Buraski Builders. People are eating at home more and deciding now is the time for updates and improved functionality.

In the not-so-distant past, many people re lied on their home as a place that resembled something more of a pitstop than an oasis where they chose to spend the majority of their free time. Between work, school, recitals and practices of all kinds, families considered themselves lucky if they were able to coordinate their schedules enough to allow time to gather around the table to share a quick meal. Until recently, spending large chunks of time at home hasn't been something that our on-the-go culture has prioritized, but when COVID hit last spring, families were suddenly spending more time at home than they ever dreamed possible.

Faced with a global pandemic and nowhere to go, people were suddenly forced to find ways to merge their living space with their working, playing and learning spaces. In light of these unexpected situations, the demand for home remodeling skyrocketed as people tried to adapt their houses to accommodate this new reality.

"I guess what's really surprised me is how we've stayed so incredibly busy during COVID," says Aaron Acree, owner and construction manager of Michael von Behren Builder, Inc. "Initially, I thought we might slow down. Everywhere you looked, restaurants and businesses were closing their doors, but the exact opposite happened to us. In fact, 2020 was probably a record year for us."

Heather Sobieski, co-owner of Buraski Builders, agrees with Acree. "Initially, when COVID hit, I decided to shut everything down. I stayed in the office the first week and it was pretty quiet, but by the second week, I was answering the phone like crazy. People were calling nonstop with remodeling projects. I thought for sure that clients would stop calling or cancel already scheduled projects, but it went in the exact opposite direction."

As far as the type of remodeling requests the builders have been getting throughout the pandemic, Acree said that when it was warmer, von Behren Builder's clients focused more on outdoor living remodels and construction.

"People were spending so much more time at home than ever before. They wanted to be able to enjoy nature and stay socially distanced from each other, and one of the safest ways for them to do that was to have us build decks, patios and add screened-in porch additions onto their homes," he said. Now that the weather has gotten colder, Acree says that they've seen an increase in kitchen and bathroom remodels. "I think that people are finally getting around to updating rooms that they may have been wanting to change for a while, but the outlook is completely different than it was prior to COVID. Before the pandemic, customers maybe wanted one thing updated, but now it's like, 'Okay, I want this new stove, and I need you to build me an entirely new kitchen to go with it.'"

Likewise, Buraski Builders is getting its fair share of calls from clients requesting additions. Sobieski says that they haven't noticed any specific projects that are more popular than others, but like Acree, says people are tackling projects that they may have been putting off.

"The remodel requests that we are getting now seem to be more personal than they used to be," she said. "It's not like everybody's seeing other people redo a bathroom and then suddenly they want a new bathroom, too. Instead, they are really focused on the personal spaces in their homes that they've wanted to improve for a while."

Despite the positive impact all of this remodeling has had on construction companies, there is a downside to the recent boom in home improvement. Since the pandemic, lumber and other types of building materials have become significantly more expensive and much harder to find. In fact, some items that used to be readily in stock and accessible to builders are now taking upwards of 10 weeks to arrive.

"There is a high demand for materials right now, but lumber companies are going through the same thing everyone else is. They might have reduced their workforce because of COVID guidelines and sometimes they have to shut down," says Sobieski. "The other thing is, last fall we had hurricanes and wildfires all over the country. Experts predicted that this spring lumber prices would go down, and I just kept thinking that couldn't possibly be right." According to the National Association of Home Builders, lumber prices have increased 130% since April 2020, which has increased the cost of building a single-family home by around $16,000.

Looking ahead, it's hard to say what the future of home remodeling and construction will look like. With people spending more time at home, some experts predict we might see a decrease in developments with open floor plans and opt for homes with more closed off and separate living spaces, which would ensure a certain level of privacy if the need should arise.

"I haven't seen that yet," said Sobieski, "but no matter how big your house is, if everyone is working and schooling from the same place in their home, it sometimes feels like there is nowhere to go. That's not functional or sustainable for anyone.  I think that we are really starting to think differently about our use of space."

Lana Shovlin is a freelance writer from Springfield who has been working from home along with her husband and three children since March, resulting in a basement remodeling project to create a space for virtual schooling.