Oysters are for lovers 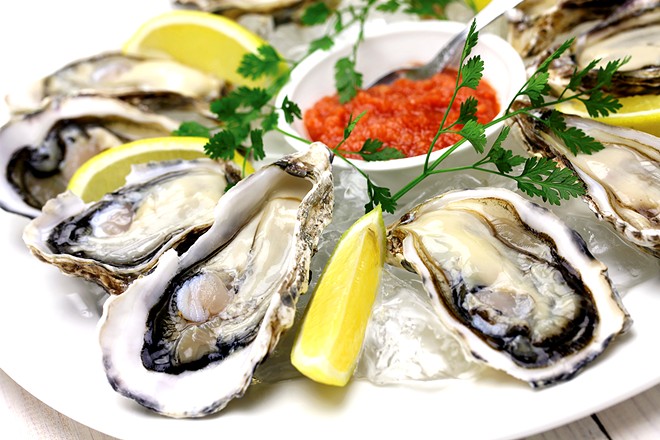 Oysters are a natural choice for intimate entertaining. They've been touted as an aphrodisiac since Roman times and were reputedly consumed as a virility booster by Casanova himself. Questionable libido-boosting claims aside, oysters are indeed perfect to serve on a date night at home or indeed any occasion. Not only are they a delicious and refreshing delicacy, they're incredibly nutritious and sustainable. Unlike many farmed seafood products, cultivated oysters and mussels actually improve the marine environment around them.

There is an incredibly diverse variety of oysters available to consumers today. Five species of commonly cultivated oysters are farmed in North America: Eastern, European Flat, Pacific, Kumamoto and Olympia. Much like wine, oysters reflect the sense of place where they're from and each variety and growing region produces different flavors and nuances. "I generally prefer East Coast oysters like Blue Points," said Zach Beatty, a fishmonger with Robert's Seafood in Springfield. "I personally prefer their flavor and they can be easier to open. The West Coast oysters are a little more difficult to open...their shells are more ruffled and can be more brittle. I recommend Blue Point oysters for cooking, for example if you were making something like an Oysters Rockefeller, because they are easier to open and they're a little bigger so you get more bang for your buck."

When shopping for oysters they first question to ask is how do you want to prepare them? If they're to be used in a casserole or stew, then the pre-shucked oysters are a great option. "Most people don't realize that shucked oysters will keep for a week or even two in a refrigerator, and they freeze really well too," Beatty pointed out. For raw oysters he recommends specialty varieties such as French Kiss, which comes from the waters near New Brunswick. "I enjoy their briny sharpness on the front of the palate with a sweet finish at the back. They're a really nice, bright style of oyster."

When shopping for oysters to serve raw or on the half-shell in a preparation like Oysters Rockefeller (broiled oysters on the half-shell topped with spinach, parmesan and garlic bread crumbs) then look for heavy specimens that have a solid feel. When properly stored, oysters last for two weeks from their harvest date, so be sure to ask your fishmonger for that date. They should always have air circulating around them, so make sure that your oysters aren't sealed up in a plastic bag on the way home. Once home, place them in a colander over a bowl or drip tray and cover them with a damp towel in the coldest spot in your fridge. Don't store them in or on ice because they will die in the fresh water that accumulates as the water melts.

To shuck the oysters, make sure the hand that's holding the oyster is covered with a mesh glove or kitchen towel. Hold the oyster so that the bowl side is face down and the flat, thin-shelled top side facing up. "I definitely recommend that folks use an oyster knife. They're inexpensive and last forever," Beatty advised. "Don't use a paring knife or something like a screwdriver – that's a disaster waiting to happen." Insert the tip of the knife into the crevice where the oyster hinges and push it forward as much as you can and twist to pop the hinge. Once it's popped then use the edge of the knife to detach the oyster from the top shell, then run it gently along the underside of the oyster to detach it from bottom shell. Try to keep as much of the delicious liquor in the shell as possible. "It's really not hard, once you get the hang of it, and there are lots of good video tutorials available online," Beatty advised.

Serve raw oysters on a rimmed tray filled with crushed ice. There are scores of delicious sauces traditionally served with raw oysters, from bright French mignonette to horseradish-spiked cocktail sauce. However, for the best and freshest oysters, a simple squeeze of lemon and a tiny dash of hot sauce is often all that's required.

While Champagne is often thought of as the ultimate compliment for fresh oysters, there are a range of pairing possibilities to choose from. There is arguably no more fitting choice of wine than a crisp Muscadet from the Loire Valley. This seaside growing region produces wines with mineral and citrus notes, perfect for pairing with oysters plucked from the adjacent Atlantic Ocean. Oysters and stout beer is a classic if not surprising combination. Just like sea salt sprinkled on dark chocolate, the salty brine of the oyster is a delightful play on the rich malty flavors found in good stout beer. Saison-style ales, with their rustic, spicy funkiness, match well with oysters as well as IPAs with their hoppy, citrus-forward flavors. And for the cocktail lovers out there, consider mixing up a Vesper Martini. Made famous by James Bond in Ian Fleming's 1953 novel, Casino Royale, this classic cocktail is comprised of three measures of Gordon's, one of vodka, and half a measure of Lillet Blanc, topped off with a twist.

Ashley Meyer lives and writes in Springfield with her snow-loving husband and two young daughters.