Out and proud on Adams 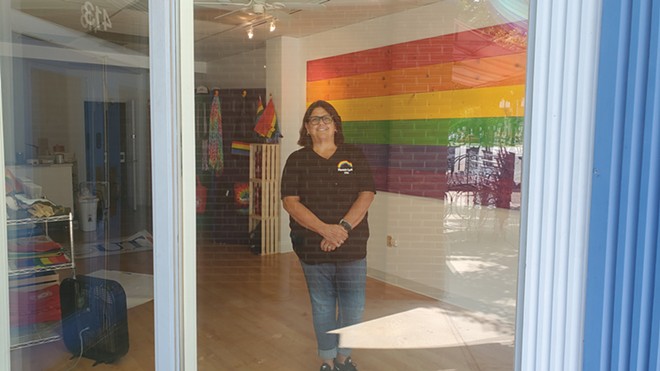 Credit: Rachel Otwell
Jonna Cooley stands in the new Phoenix Center storefront on Adams Street as she works on getting it up and running.

Adams Street in Springfield is getting more colorful. In June Jonna Cooley attended the second annual Pride Brunch on the Adams Street patio in Springfield when she took notice of an empty storefront next to Elf Shelf Books and Music. During the outdoor event, complete with booze and burlesque performances, the Phoenix Center, which Cooley heads, set up an informational booth.

The Phoenix Center is Springfield's community center for queer people in and around Springfield – with various support groups as well as onsite housing for those struggling to find a stable place to live. It also offers harm reduction and prevention services, such as HIV testing and needle exchange. The headquarters is at 109 E. Lawrence Ave.

"On that day, we helped so many people who had questions and wanted to help family members and friends," said Cooley of the brunch event in June. The outreach and educational efforts got her dreaming of a more permanent presence in the area, which has become a cool cultural corner in downtown Springfield, anchored in part by Buzz Bomb Brewing Company which opened in 2018. Cafe Moxo and Kidzeum are other businesses in the area.

Cooley set out to find out who owned the small, empty storefront next to the Elf Shelf, 413 E. Adams St., which sells used books and music. She asked Elf Shelf owner John Michael Combs and, as it turned out, he owned the empty storefront. The two quickly got to plotting about the Phoenix Center moving in. "I think it's a great fit," said Combs. "We not only like to have fun down here, but we like to be extremely inclusive."

The new location, called OUT on Adams, will be open on a limited basis starting Aug. 14 – with the goal to open more fully by sometime in September. The shop is near the Old Capitol Farmers Market, which will also help increase the Phoenix Center's visibility. Pride swag is being sold there, including jewelry that was donated by the late Anthony Catanese of Bloomington. Catanese had been a PrideFest vendor and wanted his handmade jewelry to be donated to Phoenix Center upon his death, said Cooley. The jewelry will be offered on a donation basis, and all proceeds from the rainbow-colored jewelry and other goods will help fund Phoenix Center and its operations, like the annual PrideFest, a street festival celebrating LGBTQ culture. OUT on Adams will be staffed by volunteers and those who are already employed by the center. It will keep the pride spirit going all year long, said Cooley.

Cooley said staff members will be able to answer questions patrons may have about the LGBTQ community and resources that are available. She's also beginning to plot out potential events for small groups. "We've talked about maybe doing a book club, we've talked about doing some focus groups to see what the LGBT community could benefit from, or needs."

Another neighbor of the new endeavor is Reverie Apparel, 407 E. Adams St., a clothing-design company owned by Patrick Russell. Russell has partnered with Cooley before to create LGBTQ-pride items that are sold to raise donations for Phoenix Center. He said the new storefront is a welcome addition to what's known as the Adams Family Patio. "We have this really wonderful micro-community of businesses that have banded together to make our block better, and more of a destination, and I think that's starting to work," said Russell.

The Phoenix Center will continue to carry out the bulk of its services from its Lawrence Avenue location. But OUT on Adams offers a new, bright pop of color and a chance for the city's LGBTQ-outreach arm to further extend the word about its services. "We're hoping that it allows us to help more people," said Cooley.