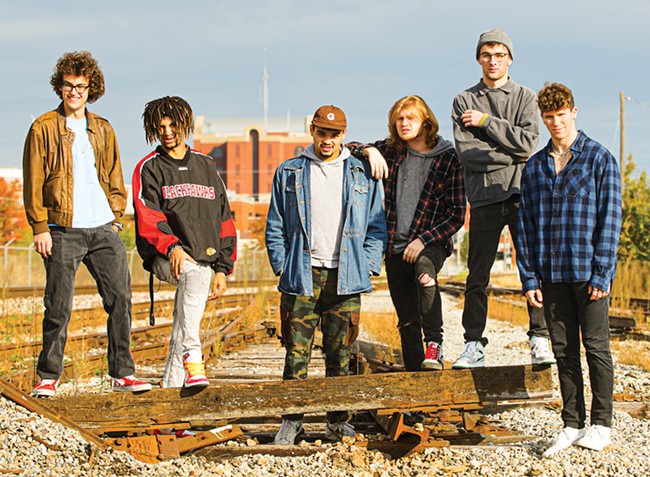 2021 became a turning point for these six cool cats from Rochester, and they've got their act together in becoming solidly what they say they are on the group's Facebook page – a "high energy rock-n-roll band." Bandmates and best pals, Matthew Runions (drums), Ty Ellis (bass), Cooper Marx (guitar), Logan McKneelen (guitar), Dave Allen (vocals) and Lucas McCafferty (vocals), knew each other through the Rochester High School music department and came together with a common cause of playing music they all enjoyed.

Runions started the band in 2018 after his dad suggested the idea, and the drummer kept running with it until this lineup clicked and clattered into a fiery live group that's been stable over the last two years. The term "rap rock" is their associated genre, but they also cover 90s rock, classic rock, punk, ska, reggae and other types of popular music to win the crowd over with enthusiastic performances at local venues. Or if you want to take them at their word, they proudly and succinctly state on their band website, "We play great music. You should check out a show."

A good percentage of their music is still covers, which is not unusual when doing a three-hour club show, but the originals are creeping in at a good pace, and that is what our readers seemed to feel was the strong suit for this unshackled sextet. The catchy title of "Psychedelic Picnic" is already chosen for an upcoming spring 2022 release with the recording process in the works. Using the CD as a springboard and calling card, the group intends to work toward playing festivals next summer that encourage and promote original music.

Hey, even the Beatles were known for current covers before conquering the world with their own music, so by those standards, Unchained is on the right track to hit the "toppermost of the poppermost," and we support and congratulate them for that direction.