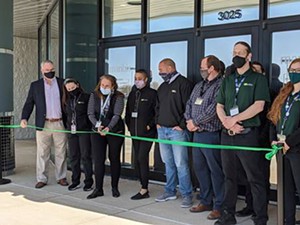 A third marijuana dispensary opened last week in the Springfield area even as legislation aimed at fixing the state's troubled pot laws percolates at the Capitol.

Maribis, which has dispensaries in Grandview and the Chicago area, cut the ribbon at its fourth shop last week on Springfield's west side, inside a Parkway Pointe movie theater on Lindbergh Boulevard that closed last year.

Dan Linn, Maribis general manager, says that the company hopes to eventually share space with a grow operation and onsite consumption lounge. The building was purchased on March 1 for $1.5 million by a limited liability corporation controlled by Chris Stone, a developer and lobbyist whose involvement in the marijuana industry dates to 2014, when the state legalized medical marijuana and he became an owner in a dispensary company that's since been sold.

The Parkway Pointe opening comes more than a year after the state legalized recreational pot. Statewide monthly sales topped $109 million in March, a record, putting Illinois on track to hit the $1 billion mark this year, if trends continue. Through March, imbibers spent nearly $279 million on weed; through the first three months of last year, when recreational pot became legal, shops sold $110 million worth of product. The year ended with $669 million in sales.

The Parkway Pointe location is one of 35 dispensaries greenlighted by the state last month as a March 31 deadline approached to pass inspection or relinquish rights to licenses granted to companies that had licenses to sell medical marijuana when the state legalized recreational weed.

Maribis and the state's 109 other dispensaries have enjoyed limited competition. The state was supposed to award 75 additional dispensary licenses in 2020, but the licensing process halted last fall when the state announced that finalists were all entities controlled by white people, despite a goal of awarding licenses to African Americans. Unsuccessful applicants who submitted multiple applications in hopes of winning multiple licenses complained about receiving different scores on identically worded responses to questions posed in application materials. The state also hasn't awarded 40 licenses to grow pot that were due last summer.

A bill aimed at breaking the dispensary licensing logjam didn't pass the House last week as a deadline arrived for bills to be sent to the Senate. Under the proposal sponsored by Rep. La Shawn Ford, D-Chicago, nearly 200 new dispensary licenses would be issued, including the 75 that were due for award last year. An additional 115 licenses, including five to sell medical marijuana, would be awarded via lottery to applicants who received scores of 85 or better on applications. The legislation specifies where new shops would go, with the Springfield area due three new dispensaries, which would bring the total to six.

The bill also would allow existing dispensaries to move within the same ZIP code if local authorities give permission. Under current state law, dispensaries are locked into locations, which some are beginning to outgrow. In Mundelein, a Chicago suburb, a dispensary owner has announced plans to expand from 4,000 square feet to nearly 15,000 square feet – parking has been an issue, with semi-trucks having trouble getting through cars parked by cannabis customers, says Pamela Althoff, executive director of the Illinois Cannabis Business Association. Parking, also, can be precious at the Maribis dispensary in Grandview. Some people, Linn says, drive an hour because there are no outlets closer to home. He said he isn't surprised, given the state's failure to issue additional licenses. "The fact that they haven't awarded those yet funnels people into existing licensees," Linn says.

Observers haven't been optimistic about pot shops sprouting like mushrooms. "It's unlikely that any new operators are going to open in 2021," Irina Dashevsky, a Chicago attorney who specializes in cannabis issues, told Crain's Chicago Business in February.

Althoff sees hope. Lawmakers in the House, she says, are still working on a bill to issue dispensary licenses despite the deadline for sending legislation to the Senate. "There has been a great deal of work on this legislation over the past four or five days," she said.

"I think there's lots of room in this market for lots of operators," he said.