One nation under God? 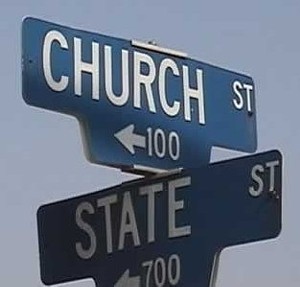 A new term is seeping into the American lexicon called "Christian nationalism."

It's a misguided belief that the United States was founded as a Christian nation. I've read the original writings of many of our founding fathers, and this notion is just nonsense.

Thomas Jefferson used his razor to redact portions of the Bible that he disagreed with. Thomas Payne was an atheist. Skirt-chasing Benjamin Franklin's autobiography would make Bill Clinton blush.

Our second president, John Adams, said, "The Government of the United States of America is not, in any sense, founded on the Christian religion."

And yet, we keep hearing many of our contemporary leaders claim just the opposite.

During the American Revolution, British troops in New York, New Jersey and North Carolina regularly burned churches or turned them into stables or military hospitals. It was an expression of the crown's contempt for faiths other than Anglicanism, the state religion of England.

It was in that post-revolutionary environment that our Constitution was drafted with a clause prohibiting the establishment of a state religion but also protecting people's right to worship freely. Benjamin Franklin spoke of his desire for Muslims and Jews to worship as freely as Christians in the new nation.

For those of you who are wondering about my own religious beliefs, I'll tell you I'm an evangelical married to a Catholic. We send our kids to faith-based schools and are active in our churches. Our faith is important to us.

But I don't believe – and never have believed – our government should promote a particular religion.

For example, if government were to mandate prayer in school, who would write the prayer? It wouldn't be possible to write an invocation that reflected the diverse religious views of those in any classroom.

And my cynical libertarian view is that government doesn't do anything particularly well. Why let it make a mess of religion, too?

Unfortunately, we live in a society where Christian nationalism is entering into the mainstream of political discourse.

So, just what is Christian nationalism?

Here is how Georgetown University political science professor Paul D. Miller described it in Christianity Today: "Christian nationalism is the belief that the American nation is defined by Christianity, and that the government should take active steps to keep it that way. Popularly, Christian nationalists assert that America is and must remain a 'Christian nation' – not merely as an observation about American history, but as a prescriptive program for what America must continue to be in the future."

When I was covering a Donald Trump rally in June, I saw plenty of T-shirts that read, "Jesus Christ is my Savior and Donald Trump is my president." That's an example of Christian nationalism.

Adolf Hitler hated Christianity, but he was able to coopt many of Germany's church leaders into supporting his regime. Swastikas had prominent display in sanctuaries and Hebrew words such as "hallelujah" were excised from church hymns as part of the Nazi anti-Semitic efforts.

Hitler would often reference God in his speeches and writings. Such examples are not an indictment of Christianity but of how its powerful images can be misused by tyrants.

When a government endorses a particular religion, it inevitably results in persecution. Jews, Jehovah Witnesses, outspoken Catholic priests and others were killed by the Nazis.

Hitler's verbal support of this coopted Christianity was a device designed to win popular support from Christian Germans. He viewed Christian concerns such as compassion and charity as a significant weakness.

Today, I see politicians wear cross lapel pins painted red, white and blue and see the same misuse of religious imagery. That cross represents something a whole lot bigger than a government or political movement.

"I found Jan. 6 reprehensible, people charging the Capitol carrying crosses," said Dr. Shaun Lewis, who for 12 years served informally as the chaplain of the Illinois legislature.

He doesn't subscribe to this Christian nationalist nonsense. He wrote his thesis on the relationship between Christianity and civil government.

"Nowhere in scripture does it talk of creating a Christian nation. This simply isn't why Jesus died and rose from the grave," he said. "Nowhere does God endorse an economic system or even our form of government."

It would be easy to assume that Illinois is far removed from this notion of Christian nationalism. After all, we are a moderate-to-liberal state with a Jewish governor. Sadly, this malignancy has infected the Land of Lincoln.

Just look at the words U.S. Rep. Mary Miller tweeted after the U.S. Supreme Court ruled that a public high school football coach could kneel and pray on the field after a game:

"A huge win for religious liberty in the Supreme Court thanks to PRESIDENT TRUMP! Coach (Joseph) Kennedy set a wonderful example for young men by praying after each game. We need God back in our schools to save our culture from the sick agenda of the radical left!"

I can't help but wonder if Coach Kennedy was a Muslim who spread out a prayer rug after each game if she would be so supportive.

I kind of doubt it.

The real cost of a college education