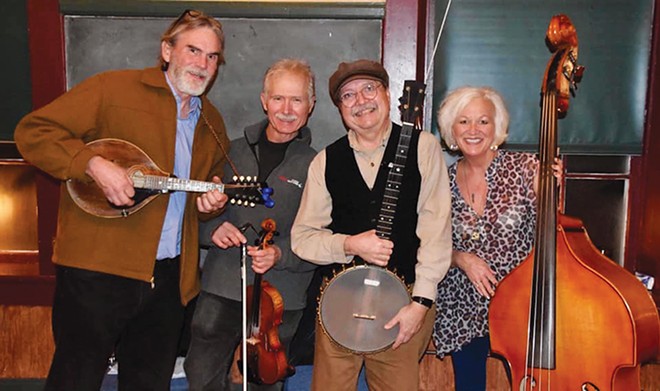 The Burr Oak String Band plays this Thursday, Jan. 9, at 7 p.m. for the Music at the Museum concert series held in the Illinois State Museum.

Here we go tumbling toward weekend number two for the year 2020 and things look about the same as usual, which means there are numerous cool and happening events for you to participate in if you would only choose to do so.


The Music at the Museum concerts, produced by Chris Vallillo on the second Thursday of each month (mark your calendars), present the top names in national, contemporary and traditional folk music. Occasionally, area artists play the venue and this month we welcome one of our finest acoustic groups, the Burr Oak String Band. Consisting of local community members and accomplished musicians Ann Bova, Steve Staley, Mark Mathewson and Erich Schroeder, the quartet of friends play old-time, bluegrass-y, folksy blues music with sweet harmonies on actual acoustic instruments. Also on Thursday, over at Buzz Bomb, Ted Keylon enacts his Crimes Against the Moonlight show, featuring performances of songs penned by the late, great Leonard Cohen. Various musicians at different gigs join Ted as he sings and plays songs from the Cohen catalog on his ukulele. Electric upright bassist Frederick T. Schurger appears to be on the bill for this one. Across town out in the western world, Pease's at Bunn Gourmet gives us the talented and entertaining duo of Jones & Chase or Kit & Jim, if you know them well. These two friends and lifelong musicians play acoustic guitars while singing and do all kinds of songs you may know, along with plenty of surprises too.


Friday is chock full of live music, so let's begin at the beginning of the night. Footprints, the long-running jazz group led by Virgil Rhodes, jumps into Robbie's at 5:30 for the also long- running Uptown Friday Night music series, hosted by our Springfield Area Arts Council. We list 6 p.m. start times for The Deep Hollow rolling into Danenbergers and Sushi Roll serving it at the Curve Inn. At seven bells, you'll find bands such as Brandy Kristen and the Revival living large at the Blue Grouch, Smashtag Acoustic going modern twang at Hand of Fate in Petersburg. Brandon Santini be-blues-ing it at Brookhills and a terrific trio of local, modern country combos, Broseph, Brushville and Isaiah Christian, roaring out loud at Boondocks. For acoustic solo/duo acts check out singer-songwriter Jake Shane visiting George Rank's while I'm away in Skokie, The Kitchens cleaning up at Arlington's, Tom Beverly & Geoff Ryan jamming the Craft Beer Bar, Jason McKenzie gearing down at Motorheads and Taylor June always on at Always After Five. Then beginning at 8 in the evening, Solar Chariot rides into Anchors Away and Jeremiah Johnson rocks the blues at Third Base.


Since Elvis Presley, the once-and-future King, celebrates a birthday on Jan. 8 (just like my best friend and yours, Tom "Dooley" Woolsey), it seems January is now Elvis month. Last weekend Elvis Himselvis did his Top 40 Part 2 at the Hoogland and this weekend the Legacy Theatre presents Joseph Hall: Rock 'n' Remember on Saturday night. Hall, a world-renowned and global touring tribute artist was born in 1984, seven years after Elvis passed, and began his Presley-inspired performances in 2006, making it as a top 10 finalist on "America's Got Talent" in 2008. Hall has done Elvis everywhere and now returns to Springfield.


Don't forget to peruse the listings for other goodies.