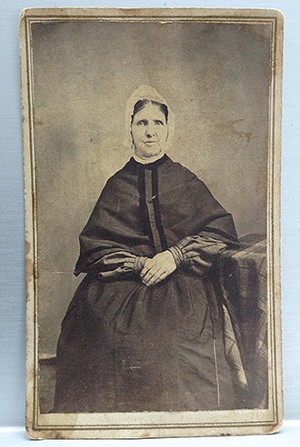 courtesy U OF I PRESS
Ann Dumville, circa 1865. Burke family papers.
Hepzibah was a young woman of a sort we’ve all known – smart, full of gumption and eager for a little bit more from life than life was prepared to give her. “It does seem to me that any one who thinks me either pritty or remarkably inteligent must err greatly. I often complain of my ignorance and want of atainment feeling that between what I know and what I desire to know there is no comparison.”

Hepzibah Dumville is only one of the arresting characters found in Women, Work, and Worship in Lincoln’s Country: The Dumville Family Letters, which the University of Illinois Press gave us earlier this year. The letters – 107 in all, of which 100 appear here – were found among the treasures in the state’s historical library in Springfield by their eventual editors, Anne M. Heinz and John P. Heinz.

The Dumvilles came from England, arriving near Jacksonville in 1840 or so – father and wife and three daughters who bought land as part of a cooperative society of the sort then springing up all over mid-Illinois. Then, calamity – the co-op failed, father died, they lost the land. Mother went work in Jacksonville as a domestic. The oldest, 18, wed a local farmer. Her sisters had to live with a farm family near Carlinville, where the older of the two taught school and the youngest was for all intents in indentured servitude as a governess, housemaid and seamstress.

The Dumvilles remind us that there is no group of people less likely to be alike than members of the same family. Mother Ann was a fierce Methodist, devoted to church; illiterate Elizabeth labored almost invisibly on her husband’s farm; Jemima, a prayerful and dutiful schoolteacher; and Hepzibah, the “very bad but would like to be good” sister, as she once put it. They feuded and fussed but remained close. The editors note that letters helped hold the far-flung family together in spite of prolonged absences – the 50 miles between the two towns might have been 500, considering how bad the roads were – not least because women had to look so often to each other for emotional and financial support.

Life for women was not as hard as it had been a generation earlier, but it was still hard in ways we are not used to. Death was omnipresent. Of the 94 letters written by the Dumvilles, 40 percent refer to death. (There was a cholera outbreak in mid-Illinois in the 1850s.) One can’t grasp the importance of religion on the frontier unless one understands its role in helping people accept death. The Dumvilles held to what they called “old-fashioned” religion, meaning charismatic Christianity, and much attention is paid to revivals and conversions and lapses and the oratorical skills of preachers.

However, in ways that might surprise some readers, their times in many ways differed hardly at all from ours. Race was on everyone’s agenda, if not always on their tongues, and immigrants (Germans and Irish) were raising frights among the ignorant. Then there were the rascally politicians. Hepzibah’s advice to her sister about the presidential race roiling the nation in 1856 remains sound. “It seems Mima that with all your Quaker like sobriety of appearance, you have had to dip into the political whirlpool. . . . I presume by this time you have a very poor opinion of Mankind in general and of F[illmore] and B[uchanan] in perticular. Well they are rather uncertain animals I believe, but as we have to stay in the world with them we must get along with our disaggreeable situation as well as we can.”

I will not be the only reader to be captivated by young Hepzibah. (To her sister: “Mima I am surprised at our lack of ready wit in conversation. I think our wit might be compared as a certain writer likens the wit of the Germans, to an “old rusty gun that never goes off till after the game is gone.”) In spirit if not in learning, she reminded me of another woman on the frontier, Ethel Waxham, whose letters on her life in the Wyoming of the turn of the 20th century are a delight. (Lady’s Choice: Ethel Waxham’s Journals and Letters, 1905-1910, University of New Mexico Press, 1996.)

Happiness, alas, needed a man. Hepzibah was born to become a teacher, or minister’s wife and thus adorn the middle class, yet the opportunities did not come her way, or perhaps (in the latter case) she spurned them when they did. (Any suitor had his work cut out for him.) A parade of churchly men passed by her, yet she ended up marrying (late) a German craftsman and they worked her sister’s land in Iowa until she died in 1869, only 35 years old. It is a sad coda to a very interesting book.