Changes have been made to allow social distancing 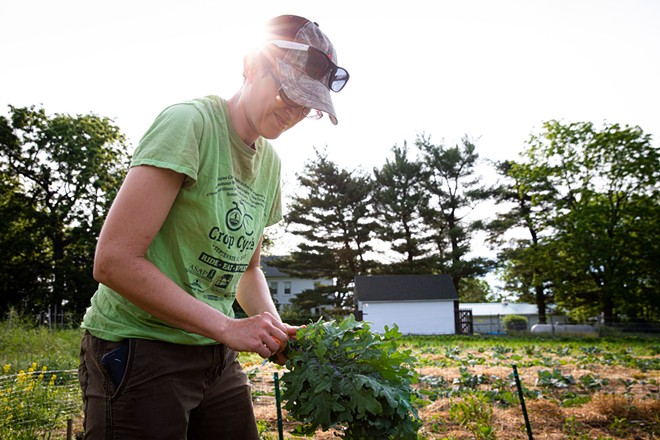 Rich Saal
Hannah Tomlin works on her farm in Pleasant Plains.
Hannah Tomlin's family farm dates far back enough the road it's on in Pleasant Plains shares her last name. “My great grandfather actually bought the farm where we live. And so it's a Centennial Farm. And my dad's really proud of that because he grew up here too, and his dad was a farmer.”

Tomlin's own venture began in 2017, after she earned a Ph.D. in education policy from the University of Illinois at Urbana-Champaign. Moon Girl Farm (15137 Tomlin Rd.) consists of about an acre that Tomlin works with her partner Ben Banach mostly by hand, organically and chemical-free.

Moon Girl is one of the vendors participating in the summer's Old Capitol Farmers Market in downtown Springfield. But things will look different this year. In keeping with state mandates meant to halt the spread of the new coronavirus, market organizers have forgone the social aspects. Instead, the market should be treated as an outdoor grocery store. Masks must be worn. There are fewer vendors and their tents will be more spread out than past years. Customers have the option to shop online and pick-up their goods curbside. “We spent 20 years establishing a sense of community, pride of our downtown area, and this year has definitely changed that part,” said market manager Kayla Graven. “You're still part of our community, but we're asking people to, at this time, take food serious, not social.”

The first run of online orders with a curbside pick-up option was during the last off-season market, in April. Tomlin is one of the vendors who started selling goods online. “We had no idea people were going to be ordering so many plants from us,” she said. Plants such as basil and tomatoes were popular, especially since at that time gardening centers had not yet re-opened. All told, vendors made more than $8,000 in online sales the first go-around. “Vendors reported back to us that their online sales were the best market day they've ever had,” said Graven.

The summer market season runs May 16 through October 31, Saturdays and Wednesday from 8 a.m. - 1 p.m. It will still be located along Adams Street, between Second and Fifth Streets. Customers can order online from vendors throughout the season at localline.ca/old-capitol-farmers-market. Those who do will be given a time slot to come pick up their food from their cars, along the right side of Washington Street.

For those who choose to shop in person, the following changes are worth noting:


• Similar to grocery stores, shoppers and vendors are expected to wear masks and keep a six-feet distance. There should only be one shopper per family, who is not sick. No pets are allowed. Tents and foot traffic will be organized to allow for social distancing as much as possible. Shoppers are not to touch food; they will point and vendors will bag.


• Programming such as entertainment and exercise classes have been canceled for the season. Shoppers are asked not to congregate and socialize.

Graven said there will be fewer than normal vendors for now, with a focus on those providing produce. She said organizers consulted with public health officials and looked to similar sized markets in other cities for planning. She said earlier on, concerns had been raised by vendors. But once it was decided the market would fall into the “essential” category and the launch of online sales and socially distant shopping took place in April, “I feel like people changed their tune and are excited about participating.”


Tomlin relies on the market for the majority of Moon Girl's income. She said as a result of the pandemic, she sees more people getting interested in gardening and the supply chain of their food. It's a bit of a silver lining, though she'll miss being able to have long chats under her tent this year.