Is the state spending too much to restore the Statehouse? 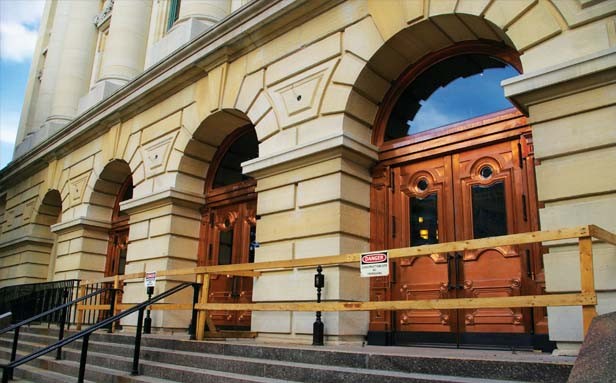 PHOTO BY DAVID HINE
Politicians have called the ornamental doors â€œexcessive.â€ By that do they mean â€œexpensiveâ€?

Ordinarily, I would be thrilled that so many people were discussing the merits of the ongoing historical restoration of the Illinois Capitol. Except they aren’t. They’re discussing “excessive flourishes,” $80,000 chandeliers and $600,000 ornamental doorways. They haven’t found any gold-plated toilet fixtures yet, but I’ll bet they’re looking.

“They” is people like Chicago State Senator Patricia Van Pelt. She is set to move her office into Room 218 in the west wing of the Capitol from whose ceiling hangs those expensive chandeliers you’ve been reading about. Van Pelt wanted to be reassigned so she wouldn’t have to explain the lavish fixtures to her constituents. Someone should tell her she’ll have to explain to her constituents things a lot more complicated than restoration economics.

“I’m just shocked anybody would spend that much on a chandelier,” she told a reporter. Actually, it’s pretty easy to spend that much on a chandelier like these. The Chicago Sun-Times roused the state’s Babbits with complaints about “fixtures designed to look like they came out of the late 1800s but with price tags equivalent to a 2013 luxury home.” Someone should tell the editors that made-to-order, historically authentic period room fittings are 2013 luxury items. You can’t go to Lamps Plus and take 300-pound chandeliers like these off the shelf. These are works of art, or at least of high craftsmanship. They will throw light on complicated public issues for many decades (which is more than we can say about most of the complainers), making their pro-rated annual cost lower than the free parking spaces provided legislators.

Patrick Quinn, Sen. Van Pelt’s titular party leader, doesn’t agree. “We don’t need to have the Palace of Versailles at our state Capitol,” he told the press. Someone should tell him that the obscenity of Versailles was not its lavishness, but lavishness enjoyed by the royal household at the expense of the people. The Illinois Capitol is the people’s Versailles, built (as Robert Fitzgerald once put it) “to represent the dignity of the Republic, heir to all ages and builders.”

Quinn is a populist politician, not a progressive one, and he roused his supporters by announcing that he was shutting down spending on the west wing restoration (after the money has already been spent) and condemned plans to finish the job (before they have been drawn up). He also demanded that Architect of the Capitol Richard Alsop be “reigned in” – meaning that Alsop be prevented from doing his job – even though Alsop and his team have acted more responsibly on the people’s behalf than Quinn.

Alsop is down for the moment, and politicians present and prospective are lined up to kick him. GOP gubernatorial candidate Kirk Dillard damned him for “excessive spending,” even though without more facts we cannot know whether the project team paid more than they should have for chandeliers, any more than we know whether Dillard is paying more than he should to become governor. Maybe what Dillard means by “excessive” is “expensive.” I guess that’s bad too, but is it really excessive spending to buy a new dog to replace a beloved setter because you can get a goldfish cheaper?

These kinds of complaints are as durable as the building itself. Construction of the Capitol continued on and off for 20 years. Because of outrage over cost overruns, voters in 1877 and again in 1882 refused to authorize appropriations to complete the building, and for a time critics even suggested it be abandoned. Today’s critics are saying the same thing about the nearly-finished rebuilding of the building. They insist that the state’s finances are too shaky to afford it, ignoring the fact that the state’s finances are shaky because the people who run it never quite learn the difference between price and value.

A few people – Christine Radogno and Raymond Poe among them – have judged the project in its proper perspective. The kind of cheese-paring urged by Quinn and Dillard and Durkin, however, would make Illinois state government as tawdry on the symbolic level as it so often is on the political level. The Capitol is a singular building. If you want to mock the pretensions of the original conception, go ahead; they verge on the preposterous. But attempting to aggrandize self-government is not an entirely contemptible gesture, and in this case it left the people with a museum of vanished craftmanship that dazzles by its sheer exuberance if not its taste. It is unique, priceless, irreplaceable. Almost everyone who sees it with unjaundiced eyes realizes that we could never do that today. Sadder still, we would never dare to try. I for one would like to see Illinois officials try a little harder to be as big as their building.