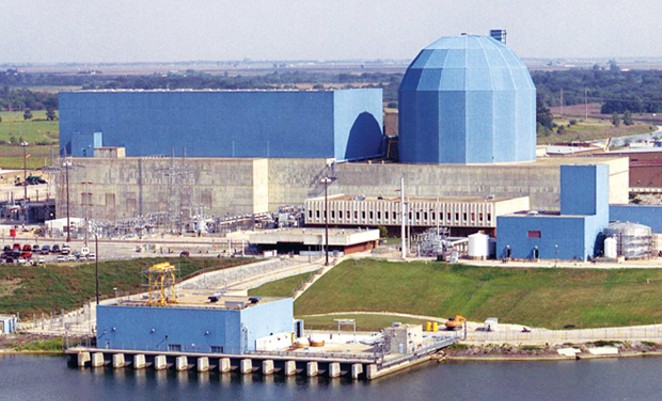 Clinton nuclear power plant.
Controversial legislation to subsidize unprofitable nuclear plants in Illinois may see a vote after the election as lawmakers return to Springfield for the fall veto session.

Characterized as a “bailout” by opponents, the bill may undergo last-minute changes, including a new way of charging customers for electricity and a roundabout subsidy for coal plants.

Power giant Exelon wants Illinois lawmakers to pass Senate Bill 1585, a proposal designating nuclear power as a “low-carbon resource.” The measure is aimed at keeping two of Exelon’s unprofitable nuclear plants at Clinton and the Quad Cities from closing.

Under Exelon’s proposed Low Carbon Portfolio Standard, 70 percent of the state’s electricity would have to come from low-carbon sources, and companies producing that power would be able to charge more for it through a system of “low-carbon credits.” Exelon says its plan would also help Illinois meet future requirements to reduce carbon dioxide emissions.

Opposition from environmental groups and coal plant operators has kept the bill from passing, but Exelon is reportedly in negotiations with Texas-based coal power company Dynegy. A potential bargain between the two companies could yield a proposal in which the state takes over what are known as “capacity payments” – agreements in which power grid operators pay power producers in exchange for a promise to provide electricity during peak demand. If state regulators take over that task, it would likely mean higher payments to power producers, ensuring income for Dynegy’s downstate coal plants which face possible closure as environmental regulations tighten.

Environmental groups have opposed Exelon’s plan, not only out of concerns about the bill itself, but also because Exelon has blocked attempts to fix a problem with the state’s Renewable Portfolio Standard. Adopted in 2008, the RPS calls for 25 percent of Illinois’ electricity to come from renewable sources by 2025, although a technical problem in the law prevents money from being spent out of a special fund set up for renewable power projects.

Abe Scarr, director of Illinois Public Interest Research Group, says one concern among environmental groups about the Exelon bill is a potential “demand charge,” which would change how residential customers are charged for the electricity they use. Currently, the energy charge on a residential customer’s bill is a standard rate per kilowatt-hour. Exelon’s subsidiary utility ComEd instead wants the rate to be based on a customer’s highest usage during a certain interval of time.

Scarr says demand charges are difficult to understand, which makes it harder for customers to determine how they can reduce consumption and cost. Two customers who use the same overall amount of electricity in a month could see wide variation in their bills, he says, due to differences in how much power they use during times of peak demand. Utilities in other states have proposed demand charges, Scarr says, but those plans were all rejected, withdrawn or rescinded shortly after implementation because of customer opposition.

Rebecca Stanfield, vice president of policy and energy markets for solar panel company Solar City, says Exelon’s proposal would also effectively gut “net metering,” a practice that lets customers with solar panels get paid back when their panels produce more energy than they need. Stanfield says net metering has been crucial to building solar markets in other states. Without net metering and a fix for the Renewable Portfolio Standard, she says, Illinois’ market for solar power won’t grow.

Val Jensen, senior vice president of customer operations for ComEd, declined to answer questions about the details of a possible deal between Exelon and Dynegy. Jensen issued a statement instead, saying the company is working with stakeholders on a bill which is “urgently needed.” He said the bill would mean more than $4 billion in energy savings, provide $1 billion for low-income energy programs, save Illinois’ nuclear plants and even accelerate the growth of wind and solar energy.

“There is broad agreement regarding the need to urgently address energy challenges in Illinois,” Jensen said, “and we hope to finalize the details of this new bill as we near the start of the November veto session in Illinois.”

Stanfield and Scarr see Exelon’s proposal in the legislature as an end-run around the Illinois Commerce Commission, which would normally have the power to approve or deny rate hikes. Scarr points out that the ICC has an adversarial mandate and a system of checks and balances meant to address the needs of utilities and customers.