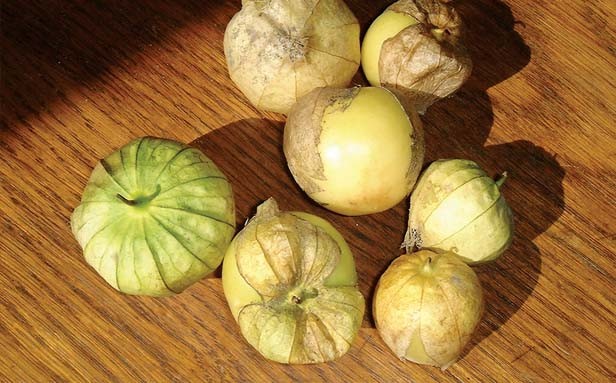 PHOTO BY MALTE/ WIKIPEDIA.ORG
The tangy tomatillo is a staple in Mexican cooking.

They look like green tomatoes, at least once their husks have been removed. When cut and the chambers of tiny seeds exposed, they still look a bit as if they could be tomatoes; although possibly, as a saying in my family goes, “like a bastard at a family reunion.” Eaten raw, their taste and texture is also somewhat like green tomatoes, albeit exceptionally crunchy and tart ones.

But tomatillos are not tomatoes, although they both belong to the Solanaceae family of plants. Members of Solanaceae can be found all over the globe, and include diverse edibles such as eggplants, potatoes and bell peppers. Tobacco is also a part of the Solanaceae family, as well as other plants that are toxic. Tomatillos, native to the American West, Mexico and Central and South America, are most closely related to ground cherries, which grow wild and are delicious, and decorative bright orange Chinese lanterns. Though it may seem an odd grouping, the different Solanaceae species’ flowers reveal their relationship, at least any I’ve ever seen: similar small, star-like petals surrounding a pointed center. I’ve seen a lot of those blooms up close and personal, bending down to pick the fruits of seemingly endless rows of eggplants, peppers and tomatoes, or pulling away mounded soil to harvest potatoes during my childhood and young adulthood at my family’s organic produce farm.

We didn’t grow tomatillos back then; in fact we wouldn’t have even known what they were. But they’re an integral part of my husband’s and my relatively miniscule garden, not that it’s taken any effort on our part. We planted tomatillos almost two decades ago, but they’ve been self-seeding and flourishing ever since.

Like their closest cousins ground cherries and Chinese lanterns, tomatillo fruits are enclosed in a papery outer shell. They are ripe and ready to use when the fruit has grown to the point that it completely fills the shell, or even has burst it open a bit. After peeling away the papery shell, you’ll find that tomatillos’ surface has a sticky coating. It’s not harmful, but should be rinsed off before using.

While some recipes call for completely raw tomatillos, most (and the most traditional) usually cook them at least partially. This can be done by simmering them gently in water to cover, or (again, most traditionally) by placing the husked tomatillos on a hot griddle, turning frequently until blackened in some spots and slightly softened, or roasting in a hot (450 F) oven, turning as needed. The roasting and griddling methods concentrate tomatillos’ flavor.

Every year at about this time, I have a bumper crop of tomatillos, and use them to make large batches of the following recipes for the freezer. The mole is wonderful by itself or combined with a little sour cream or yogurt as a dip for tortilla chips or crudités (raw vegetables). It can be used to top salmon or other fish or as an accompanying sauce to countless Mexican preparations.

The pork and tomatillo “chili” isn’t technically a chili; it contains neither dried or fresh peppers. But it seems “chili-esque.” The tartness of the tomatillos, tomatoes and sweet/tart orange juice give it a brightness that makes it a real crowd-pleaser, and one or my family’s favorites.

These days you don’t have to grow your own to enjoy tomatillos. They can often be found at farmers markets, and are usually available in local groceries’ produce sections. Unhydrogenated lard can be purchased at the Triple S Farm stand at the Old State Capitol Wednesday market, or at Humphrey’s Grocery.

Roast the poblano over an open flame by holding it by its stem with tongs or laying it on a rack. This can also be done over a hot fire on a barbecue grill. Turn frequently until the skin of the chile is completely blackened.

Put the chile in a small paper bag and roll up the top. Let the chile steam for about 5 minutes or until the skin has loosened from the flesh. Wipe off the blackened skin with a paper towel, then open the poblano and remove the seeds and stem. It’s OK if there are still blackened bits clinging to the poblano’s flesh.

Add the poblano to the blender or food processor along with the onion, parsley, cilantro, water and masa harina. (If you are using tortilla chips instead of the masa, crumble them, mix with the water, and let stand for about 15 minutes before proceeding.) Purée until smooth.

Heat the lard or other fat in a large heavy saucepan or skillet over high heat. Add the purée and bring to a boil. Reduce the heat to low and simmer the mole, uncovered for about 10 minutes (if you’re making multiple batches it will take longer). The sauce should thicken to the consistency of a fine textured salsa. Season to taste with salt and sugar. Mole verde freezes well. Makes about 4 cups.

Pork, tomatillo and black bean chili
For garnish, optional
In a heavy bottomed large pot, heat the oil over medium-high heat. Add the meat and brown. You will probably need to do this in batches so as to not overcrowd. Remove the meat as it is browned and reserve.

Pour off the excess fat and add the onions and garlic to the pan. Sauté until softened and golden brown, about 10 minutes. Add the beer, orange juice, tomatillos, chopped tomatoes, the liquid from the black beans, and the cilantro stems and bring to a boil and add the pork. Reduce the heat and simmer, uncovered for about 30 minutes, or until the mixture has reduced and thickened somewhat.

Vegetarian version: substitute an additional 30 oz. can of black beans for the meat. Use vegetable oil instead of bacon fat or lard.