The noise from boom cars is confusing Springfield aldermen 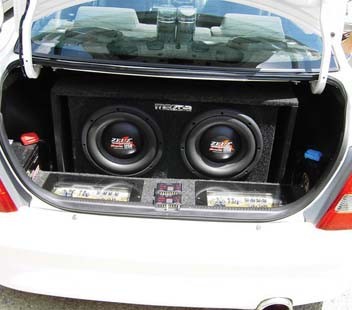 Were a boom car to drive past city hall while Springfield’s city council was in session, the din would make it impossible to hear what the aldermen were saying. This is the sole public advantage of allowing the super-amped hip-hop-mobile to roam the capital’s streets at will, but anyone who has been following the debate about taking a zero-tolerance approach to the control of nuisance noise from car sound systems will agree that it is a significant one.

The existing city ordinance – first-timers fined $250, which rises to $500 for a second violation within a year and confiscation of the car in the case of a third violation — looks good on the books, but apparently the law is next to worthless on the streets. Springfield police say they received more than 3,000 calls in 2008 and again in 2009 about loud music, including loud music from cars. Only one in eight of these complaints led to a ticket. So far this year, enforcement has been even more spotty – 57 tickets after more than 1,000 complaints. Not a single car has been towed.

Talk around town holds that the police are short-handed, and have more important things to do. The first is indisputable, but short-handedness is an argument to hire more law enforcement officers rather than to enforce less law. The second assertion demands to be disputed by those who believe that it is very important indeed that a city have control of its own streets.

But how to achieve it? Noise coming from cars is hard to police by its nature. The source is mobile, and riders turn down at the first sight of a squad car. Spot enforcement in high-complaint neighborhoods of the kind used in drunk-driver dragnets would seem to have promise, but fighting crime where the criminals are is an affront to citizens of tender sensibilities, and a politically sensitive mayor will not insist on it.

The proposed ordinance threatens car owners with immediate confiscation at the first offense. Its severity is the main objection to the proposal; less has been said about its target. When someone is shot, the law is largely indifferent to who owns the gun, focusing instead on who pulled the trigger. Rather than target the car, why not target the real culprit by banning possession of sound equipment of such capacity that using it as intended would break the law? Illinois cities ban the sale of markers and spray paints favored by taggers for that reason.

Voices have been heard that the police shouldn’t bother to enforce such laws at all. Boys will be boys (and it always will be boys misbehaving in this way) and who is harmed really? Ward 1 alderman Frank Edwards told his colleagues in November, “I grew up in the ’60s and ’70s and we used to go to Washington Park and put the stereos on top of the car.”

I am of that generation which liked its music loud and its hair long. But while several people back then told me that people like me made them sick, I didn’t. The old battery-powered boom box is to the boom car what the BB gun is to the assault rifle. Low frequency sounds or infrasound in particular affects the nervous system. These machines push astonishing amounts of air, and the brain reacts to being pushed as it does to any assault. The adrenalin flows, the heart speeds up, the muscles tense, the blood pressure spikes. It is palpably untrue, in short, that playing bass-heavy hip-hop doesn’t hurt anyone.

I sympathize with today’s young men to a point – boom cars are probably the only way that most of them will ever make any noise in the world. But if young males indulged in bullying behavior that drove residents out of their yards to take refuge behind closed doors and windows on even nice days, there would be no debate about whether to clamp down on it.

And make no mistake – cranking up the bass is intended as bullying behavior. I suppose we ought to be grateful that they are intimidating each other with subwoofers and not submachine guns. (The impulse is the same in each case). Deprived of their boom cars, these peacocking thugs would have to fall back on traditional means of testing their manhood, such as beating each other’s brains out with baseball bats instead of bass lines. It would be cheaper for the young men and quieter for the rest of us.