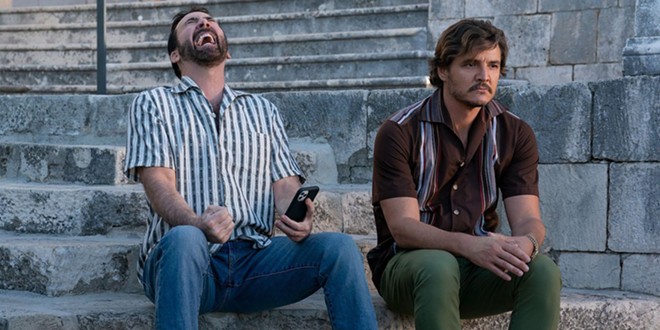 Cage quite cagey in Unbearable

There's a great deal going on in The Unbearable Weight of Massive Talent and it all has to do with Nicolas Cage...or is it Nick Cage? Of course, there's probably a bit of Nicolas Kim Coppola floating around as well, but we won't bother to parse all that out. At once an examination of the blurring of the lines between an actor's genuine personality and their screen persona as well as how audiences project their own perspectives on screen idols, Unbearable is a fun look at modern celebrity with Cage joyfully lampooning his own image playing himself...sort of.

The actor longs for a comeback and has a $600,000 hotel bill hanging over his head. Desperate, he accepts $ 1 million to appear at a reclusive millionaire's birthday party. Needless to say, Javi (Pedro Pascal) is thrilled with his guest, who utilizes his full Cage-ness when the pair find themselves caught up in a kidnapping involving Italian mobsters. Don't worry about the plot of the film – it's inconsequential. Just sit back and enjoy all Nicolas Cage has to say about Nick Cage. It's as cleverly meta as you could hope for. In theaters.

Barry Levinson's The Survivor is a disjointed film that never finds a proper rhythm, a movie that proves unwieldy and at times simply doesn't mesh. Nonetheless, it proves a moving experience thanks in large part to a profound performance by the perpetually overlooked Ben Foster, as well as its compelling story, a fact-based tale based on the harrowing life of boxer Henry Haft. Having spent time in the Auschwitz concentration camp, the fighter was forced to compete in death matches to survive, acts that haunted him the rest of his life.

Alternating between Haft's post-war efforts to make it in the fight game and harrowing flashbacks of his experiences in the camps, director Barry Levinson powerfully underscores how the boxer's past is ever present, affecting the personal and professional aspects of his life in ways he fails to understand. If the film has a fault, it's that it attempts too much, Haft's life after boxing coming off as an afterthought, rather than a fully constructed storyline. Still and all, there's no denying the genuine sentiment on display, Foster breaking your heart with his portrayal of a fighter who failed to realize he was his own worst enemy. Streaming on HBO Max.

Like so many writers, Anthony Summers promises more than he can deliver in The Mystery of Marilyn Monroe: The Unheard Tapes. Having been approached by the Los Angeles District Attorney's office after they reopened the case surrounding the actress' death, her biographer dived back into his files to reexamine his findings. He discovers enough to approach and set up interviews with key figures in Monroe's life, ultimately amassing some 650 audio tapes. These recordings, as well as the promise of new revelations, are the foundation this film is built on.

Unfortunately, director Emma Cooper botches things from the start, electing to have actors stand in for such key figures as John Huston, Billy Wilder and Jane Russell, to lip-sync the recordings as they're played. This is a needless distraction while the way Cooper presents this material proves frustrating as she states and restates many of the facts in the case, resulting in a film that spins its wheels. As for big revelations, there aren't any, Summers' conclusions reconfirming most of what we already know about the actress' tragic death. These tapes would have been better left unheard. Streaming on Netflix.