Gotham has always drawn Springfieldians to the bright lights 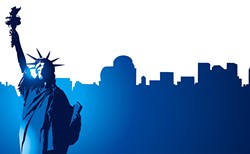 It is natural in this season to think of New York City, but this year I have been thinking of it in a happier light than the 9/11 anniversary casts on it. I had reason to read the interview that banker George W. Bunn, Jr. did before he died in 1973. The Bunn family in later years seasoned the younger scions of the family by sending them to Wall Street, but this Bunn served a different sort of apprenticeship there.

After he graduated from Princeton in 1912, Bunn moved to New York to work as a reporter on the New York Morning Sun, which he did for a year or so. When that paper started up a service that syndicated book reviews to papers across the country, Bunn became assistant for a time to the editor, the editor being the young Sinclair Lewis.

Bunn covered the big trials, got a job writing copy for book covers, wrote a play in his spare time (never produced) but which, he believed, gave Lewis the title for his novel – Main Street. (“My one knock on the door of fame in the literary world,” Bunn would recall.) As so many young had done, he discovered he was not actually very good at any of these trades. Having earned his degree in Life, he sensibly decided that “the best thing for me to do was to go home and get into something that was solid and worth following,” which was running the old Marine Bank.

“If you make it in New York, you can make it anywhere” is assumed to testify to the competition that you have to survive there. And it’s true that New York became, and remains, New York because it draws to it the best and the brightest young people, or at least the most energetic and ambitious, from around the country. The saying overlooks the fact that it is also easier to make it in New York than anywhere, at least in certain fields, because there are so many more opportunities. (Opportunities of certain sorts, anyway; anyone who’s moved there learns that if you can afford the rents in Manhattan, you can afford the rents anywhere.) New York works as a foundry of ideas, careers and companies because of what economists know as the network effect. Every person who moves to the city gives another person a reason to move there, having become a potential client, lover, employer, mentor, benefactor, customer, etc.

Nelly Revell grew up in Springfield and made it to the top of the New York newspaper world beginning at the dawn of the 20th century, working as a news reporter for the New York World and the New York Evening Herald covering everything from prizefights to the funeral of Queen Victoria in February 1901. That led to a career as a theater publicist; when she got sick, her pals threw a fundraising benefit on Broadway. Revell ended up writing popular inspirational books, hosting a nationally broadcast talk show and writing an advice column.

Relations of a very different kind were the preoccupation of William H. Luers. A proud graduate – how could he be any other kind? – of Springfield High School (Class of ’47), Luers was a career Foreign Service officer from 1957 to 1986, a career that included stints as ambassador to Venezuela and Czechoslovakia. He later served as president of the Metropolitan Museum of Art, where he put his diplomatic skills to work to smooth relations among New York arts organizations, whose competition for audiences and donors often leaves them behaving like petty duchies of the Hapsberg Empire.

Still, New York’s a tough town. After an undistinguished term at the Art Institute in Chicago, the young Vachel Lindsay of Springfield moved to New York in 1904, where he went to art school and hung out at the Metropolitan Museum of Art. But publishers declined to buy his odd works (New York has a high tolerance for eccentricity but only if it can sell) and he ended up lecturing on art and poetry in various YMCAs, which was a sort of open-mike circuit for entertainers trying to make people not laugh. In 1908, he left.

There are others, such as theater director Robert Falls and investor/conservationist E. Patrick Coady. New York is no longer the Oz for the young it once was, but bright young people still have reason to go there. My circle of acquaintance is not wide, but I know three such from Springfield who are there now. Most, like Lindsay, probably will not stay. Nonetheless, they will have learned there is a place in this country where for one fare the subway will take a guy from downtown Brooklyn to Wall Street and Greenwich Village, the Empire State Building and Grand Central, Central Park and the Metropolitan Museum of Art and Yankee Stadium without changing trains. If that’s not a wonderful town, I don’t know what is.