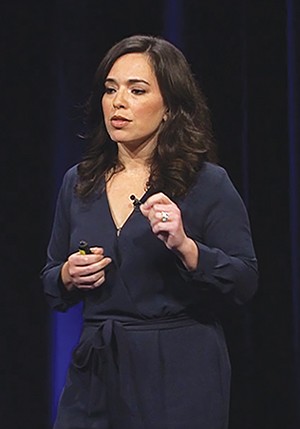 Photo courtesy pbs.org
In 2019 Pacione-Zayas was featured on a PBS program speaking about how the well-being of children reflects a community's overall well-being.

State Sen. Cristina Pacione-Zayas is on a mission to change the status quo of education in Illinois. "My objective was to be a disrupter," Pacione-Zayas said of her time working for the Illinois State Board of Education. "I knew that people may not agree with me, but if I anchored my disruption in research and data it would move the conversation away from rubber-stamp, business as usual." The newly appointed legislator is 42 years old. But she's already steeped in experience addressing education and equity.

Last summer, ISBE adopted a resolution pledging to address systemic racism within schools and curriculum. Pacione-Zayas called the resolution a "platitude" and insisted more was needed. ISBE subsequently commissioned a group to audit the agency through an equity lens.

Among a long list of prior professional and activist positions, Pacione-Zayas established the Early Childhood Leadership Academy, a program to teach educators how to advocate in legislative settings. She was also associate vice president of policy at the Erikson Institute, a school that provides graduate certifications in social work, early childhood education, development and law.

Her parents were community organizers who "worked their way up and became the executive director and program director" of the Logan Square Boys and Girls Club in 1978, the same year she was born. "The club was a second home. Community was really an extension of family for me," she said. Her parents took her to board and community meetings and peaceful protests. She attended a Chicago public magnet school located in the Cabrini-Green community. Now the "neighborhood is completely gentrified," but at the time it was, "basically subsidized housing and so we had in the school an incredibly diverse population racially and ethnically, as well as individuals born outside of this country," she said.

In high school, Pacione-Zayas organized support around LGBTQ rights, HIV and AIDS peer education and Puerto Rican self-determinism. She is a University of Illinois at Urbana-Champaign alum. "It was a shock to be in that kind of environment because you had a white population of students that was a mix of suburban and rural. And for the first time, I was in a setting where I was definitely the minority," she said.

In college, she helped design the UIUC Latino/Latina Studies Program and worked in the public schools of Chicago's Little Village.

Pacione-Zayas later directed the "Culture of Calm" initiative in Chicago, which aimed to reduce violent crimes committed by youth by transforming schools into community anchors for students and their families. She also explored restorative justice practices and taught about the long-term effects of stress and adverse childhood experiences.

Shortly after, the senator led the Latino Policy Forum's education agenda, where she focused on early childhood education in Illinois. According to ISBE's 2019-2020 data, approximately 52.5% of students in Illinois are non-white and 26.6% identify as Latino or Hispanic. Pacione-Zayas said schools have failed to provide the tools bilingual students need to succeed.

Wage stagnation, Pacione-Zayas said, is the number one problem impacting early childhood education. "Nearly 50% of those who work in early care and education are also eligible for public assistance, and because they make so little, the turnover rates are extremely high," Pacione-Zayas said. Many of those workers are women of color. "If we don't take care of our workforce, what kind of adverse impact does that have on early childhood?"