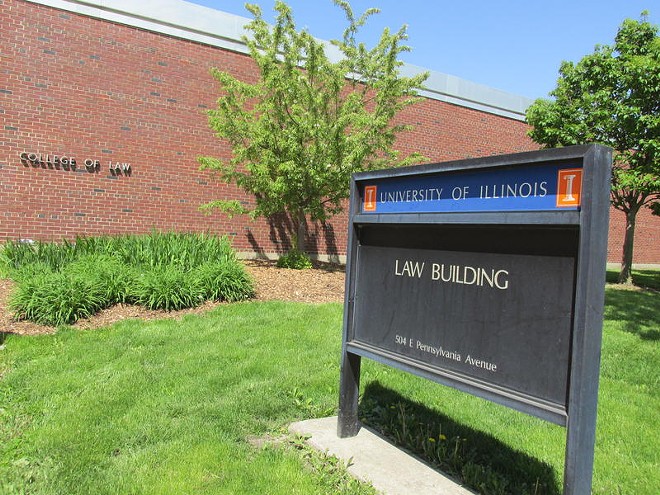 A University of Illinois at Urbana-Champaign law professor facing a new investigation into claims he sexually harassed students and fellow faculty has been found in violation of the university’s sexual misconduct policy. That’s according to internal investigative reports from late last year that Illinois Times obtained through a public records request. The law firm hired by the university to investigate new claims against Jay Kesan from 15 women suggests that “significant employment action be taken” against the tenured professor.

A former student lodged a complaint against Kesan with the university in November 2018, initiating the subsequent investigation a month after the first sexual harassment allegations against him became public.

After receiving new investigative findings from the Office for Access and Equity, the dean of the College of Law recommended in February that the university pursue “serious sanctions, up to and including dismissal.”

Kesan wrote in a statement to the Illinois Times that the report “makes no attempt to be fair or neutral.” He wrote, “There is no evidence that supports many of the findings.” Kesan wrote that he had not been treated fairly by the university and that he is “about to be punished for the third time now for the same basic conduct.” He noted he has undergone counseling "in order to improve and to also show my commitment to the process."

The university said the matter is under review. “We care deeply about anyone who has been affected by inappropriate behavior, and we are vigilantly focused on maintaining a comfortable learning and working environment for all students, faculty and staff that is free of discrimination and harassment, and where intellectual exploration and academic integrity are unencumbered,” wrote spokesperson Robin Kaler in an emailed statement.

The university faced criticism over its handling of the initial complaints leading to an investigation. Widespread reform efforts followed, including a UIUC committee on faculty sexual misconduct that released a host of recommendations for change last year.

At a #MeToo forum in October 2018 at the College of Law, Kathy Lee, an Urbana resident with friends in the law school, asked what was being done to protect students from Kesan’s behavior. News media reported soon after that he had violated the university’s code of conduct, but not the sexual misconduct policy, after an investigation into allegations from three women. The report included the testimonies of 38 witnesses. As a result of that investigation, taking place from 2015-2017, Kesan was told to undergo training and had to miss out on pay-bumps for a limited period of time, but remained on faculty.

A university finding of sexual harassment likely would have come with more severe sanctions, but his behavior — including unwelcome touching, inappropriate sexualized comments and “ogling”— was not deemed “severe or pervasive” enough to qualify as sexual misconduct.

Lee said she has friends whose careers have been negatively impacted as a result of being harassed by Kesan. Lee felt obligated to speak at the forum in hopes of protecting others, “I said, I think we need to shine a light on this. This can’t go unspoken.”

After calls for his resignation, Kesan wrote a letter to the law school community admitting to and apologizing for the conduct described by victims. He stated he would take a voluntary unpaid leave for calendar year 2019.

Kesan had been scheduled to teach in January 2020. However, weeks before, it was announced he would instead go on “university-sanctioned leave,” according to an email sent to students and faculty from the College of Law dean. A university spokesperson would not comment at the time about details.

The most recent investigations are broken into two reports, both dated November 2019. One has details from “as many as 14 different people” over a period “as long as 15 years.” The other includes claims from a former student detailing “a series of actions in 2014 of a sexual or gender-based nature,” including prying into her personal life, repeatedly urging her to meet with him privately, and running his fingers on her bare skin “from about two inches above (her) knee, to very close to her hip” while parked in a car.

According to the first report involving a single student, Kesan did not deny the touching and said it would not surprise him if it happened, but that he didn’t remember it. The investigator said the touching bordered on sexual assault. Kesan was found in violation of both the sexual misconduct policy and code of conduct as result of the woman’s claims.

The reports, authored by attorney Peter Land of law firm Husch Blackwell, state that while on leave in 2019, Kesan underwent counseling and learned that he “needs to be more cognizant of how he is perceived” — including respecting physical boundaries in the workplace.

Kesan told investigators that having grown up in Mumbai, India, there were “cultural differences” to blame in part for his behavior, and counseling had helped him see that. He also claimed he often gets close to people when speaking as he is hard of hearing.

When asked why complaints were coming from women as opposed to men, Kesan answered, “It could be that the problem is me.”

Per the second report, Land investigated the allegations of “as many as 14 different people.” Claims include more unwelcome touching, flirting, “ogling” and invitations to private meetings away from work. There’s also one anonymous report of a sexual relationship with an international student, which Kesan denied. Kesan largely responded by saying he did not recall the alleged behavior.

In that report, Land found that Kesan’s behavior violated the code of conduct, but was not “severe or pervasive” enough to violate the sexual misconduct policy in all but one of the cases investigated.

He did however find that Kesan violated both policies in the case of allegations levied by Jessica Lanford, a former student whom Kesan invited to Tokyo for research. Once in Japan, he proceeded to touch her inappropriately and pursue a romantic relationship, she said.

Lanford, who was also a witness in the initial investigation completed in 2017, said she was approached by the university’s Title IX office in March of 2019 to give testimony, again. She felt wary of the issue once more coming into her orbit.

“I had the first time around really felt that I was doing the right thing by sharing what had happened to me, that I could trust the officials at the university to do the right thing with information that I was sharing,” she said. But she was ultimately disappointed with the original outcome.

She said she asked the investigators to be informed of the status of the case, reaching out to Land and the Title IX office after she testified, but said she was kept in the dark of its progress. Throughout the past year, she remained hopeful that this time the university would “get it right,” that is, find Kesan in violation of policies and issue serious sanctions.

In the written statement shared with Illinois Times, Kesan said Lanford’s claims had already been part of the investigation in 2015-17 and questioned why a new decision was reached.

In the midst of the #MeToo movement, universities across the country have been grappling with how tenure protections and other factors unique to higher education — like heightened power differentials — can enable bad behavior. Kesan’s situation has drawn national attention as some argue it exemplifies gaps in current policies.

UIUC law professor Robin Kar headed the committee tasked with researching best practices and suggesting ways to change the university’s investigative and disciplinary processes. The committee released a report last fall with a host of suggestions, including considering a way to make the sexual harassment policy more broad in terms of what it considered qualifying behavior. It also suggested the university hire more confidential advisors to work directly with victims.

And it found complaints about the amount of time investigations took were widespread. “We concluded that the expeditiousness of these processes was something we needed to improve,” said Kar.

Last year, an investigation by NPR Illinois and ProPublica found that UIUC faculty who had violated university sexual harassment policy in recent years were put on paid leave for months. Some signed nondisclosure agreements with the university, where it promised to keep the details of their departures secret unless required by law. Some went on to new appointments, where their new employers were assumably not privy to their histories.

Earlier this month, in a letter to UIUC’s Office for Access and Equity, the College of Law dean agreed it would be appropriate to “levy significant sanctions” against Kesan as a result of the recent investigative findings. However, he wrote that those sanctions would be beyond the college’s authority to impose.

Meanwhile, it’s not only victims who have a close eye on what broader policy changes the university might approve, and many hope the issue doesn’t fade away. “The reason they came forward was because they want to see change for people in the future. And they did not feel that anything had changed for the future,” said Lee of her friends who formalized complaints with the university years ago.

Those friends include Lanford, one the targets of Kesan’s harassment. Having reviewed the new investigative report provided to her by Illinois Times, she said, “I absolutely agree with the findings, but I’m concerned that procedurally there’s continued confusion.”

Mary Hansen of NPR Illinois contributed to this report.

If you have been a target of sexual harassment or assault, you can speak with someone who has been trained to help by calling the National Sexual Assault Hotline at 800-656-HOPE (4673) or chatting online at online.rainn.org.