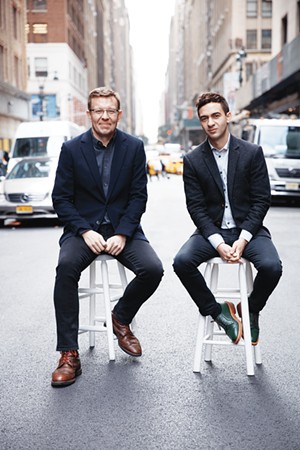 Henry Timms and Jeremy Heimans, authors of New Power: How Anyone Can Persuade, Mobilize, and Succeed in Our Chaotic, Connected Age, 2019.

This fascinating book explains the shift from old power to new power and how this is impacting politics, business and everyday life. Jeremy Heimans and Henry Timms describe "new power" as open, participatory, bottom-up and peer-driven. With new power, there is a belief in the wisdom of the crowd, transparency and a more open decision-making process. In contrast, "old power" is closed, hierarchical, authoritarian, held by a few and jealously guarded. They portray old power as like currency and new power like a current.


Heimans and Timms argue that new power is here to stay, and it can be used for good, bad or trivial pursuits. They say the future will be a battle over mobilization of people. The everyday people, leaders and organizations who flourish will be those best able to channel the energy of people around them.

Heimans is from Australia and an activist since his youth. He is the co-founder and CEO of Purpose, a global organization headquartered in New York that builds and supports movements for a more open, just and habitable world. Timms is the president and CEO of New York City's Lincoln Center for the Performing Arts and a co-founder of #Giving Tuesday, an international day of philanthropy.


The book is full of examples of corporations, government agencies, individuals, nonprofits, advocacy organizations and politicians using new-power strategies with varying results. Old power is not necessarily bad, and new power can be used for good, bad or even the trivial. An example of new power being used for good is crowd-sourced drug trials. ISIS, the Middle East militant group, is an example of new power being used for sinister objectives. Still other organizations are effectively blending old power and new power. The National Rifle Association is masterful at engaging in old-power tactics, such as how they lobby Congress and grade voting records. They also know when to get out of the way and let new power surge, such as with local issues where their loyal supporters lead the charge.

The concepts in this book are relevant to virtually any workplace as well as understanding how things happen – or don't – in the world around us. Social media has transformed communication, and in turn people's behaviors and expectations are changing, disrupting the traditional old-power models. Young people entering the workforce have grown up in a connected world, commenting and liking and sharing on social media. They expect a more open and participatory environment, where they have a voice in their workplace. New power vs. old power is also clearly at play at the highest level of politics.


A few examples help demonstrate old power vs. new power. NASA, an old-power type organization, is known for its technical expertise working on tremendously challenging issues. NASA experimented with new power, inviting the world to contribute to 14 strategic research and development strategies. Three thousand people from 80 countries responded, including recognized experts and unknown but knowledgeable individuals. The crowd provided useful information, but there were two internal reactions. Some scientists enthusiastically supported this open innovation initiative as a new opportunity to solve problems, while others considered it a waste of time and a threat to their expertise.


Harvey Weinstein is an example of old power. He had enormous power in the movie industry, which he maintained through a closed, hierarchical system. After allegations of sexual misconduct surfaced, there were nearly a million tweets using the hashtag #MeToo in just 48 hours. This is new power in action, engaging a crowd and surging like a current.


Attempts to use new power sometimes have unanticipated results.

The Natural Environment Research Council, a leading public funder of environmental science in the United Kingdom, dipped its toe in the water with new power by inviting the public to name a new $300 million polar research vessel. This "old-power" organization put forward serious names, such as Shackleton and Endeavor, and asked the public to add names and vote. Soon the whimsical name Boaty McBoatFace surfaced. The name went viral and won the popular vote. The science minister was not prepared to relinquish control to the crowd and give this important new research vessel such a quirky name. Ultimately, the ship was named after Sir David Attenborough, and a remote-operated subsea vessel was named Boaty McBoatface. The authors suggest that traditional old-power organizations attempting to use new power should first decide what problem they are trying to solve, the legitimacy they have with the people they are trying to engage and whether they are willing to cede some control.


Heimans and Timms compare and contrast how Barack Obama and Donald Trump have used new power. They argue that during the 2008 primary, Obama energized his crowd with the message, Yes we can – We are the change that we seek, and this helped Obama eclipse the old-power donor apparatus of the Hillary Clinton campaign. They also argue that he lost momentum to build a movement when his social media network was turned over to the Democratic National Committee and failed to bring along the Republicans and Independents who helped Obama first get elected.


In contrast they describe Trump as a "Platform Strongman," mastering new-power techniques to achieve old-power, authoritarian ends. He effectively uses new power through his tweets to energize his base, but with messages that he, not we, can fix things. They cite research from as early as January 2016 that identified the one trait Trump supporters shared. It wasn't age, gender or religion, but having an authoritarian value set. Authoritarian values include commitment to hierarchy, loyalty, power, inclination to obey and seeing things in black and white. The authors say combining old-power, authoritarian values with new power to co-opt a crowd is behind some of the most potent and dangerous leadership models in the world today.

Regardless of one's politics, this is a book worth reading to gain greater insight to how politicians and others are using new-power strategies and having huge impacts. And, anyone interested in engaging people to support a movement or cause – whether at work or as an individual – can benefit from learning how to navigate in this new-power world.


Karen Ackerman Witter is a freelance writer whose goal is to connect people, organizations and ideas to achieve greater results. She read New Power after hearing Jeremy Heimans and Henry Timms speak at an American Society of Association Executives meeting in Columbus, Ohio.

Scientist in search of a spiritual higher power