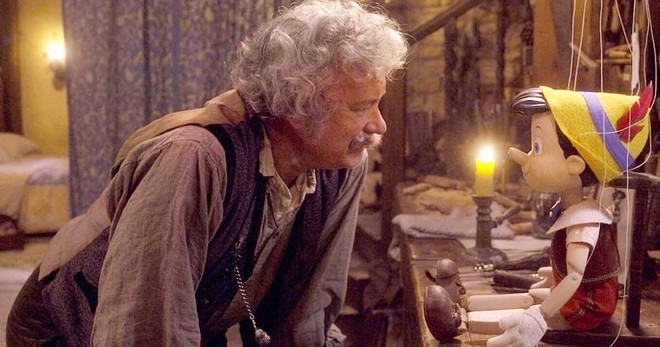 Magic remains in Pinocchio
For me, Disney's live-action remakes of their animated classics are a mixed bag. Without question, they are gorgeous to look at; however, many suffer from a sense of bloat, adding unnecessary songs and characters that add nothing to the story. Disney's latest, Pinocchio, for good or ill, follows the formula the studio has set for these re-dos. Tom Hanks stars as Geppetto who, along with Jiminy Cricket (Joseph Gordon-Levitt) attempt to shepherd the wooden Pinocchio to genuine boyhood.

The story's familiarity works in its favor, the movie creating the sense of enjoyment that comes from revisiting a well-loved tale, artfully done. However, four new songs add nothing to the story, and the film grinds to a halt when they're performed. Be that as it may, there are enough good things about this production to recommend it. Keegan-Michael Key is a delight as Honest John, his rendition of "An Actor's Life for Me" a showstopper for all the right reasons. And newcomer Benjamin Evan Ainsworth's voice work as Pinocchio marries the requisite emotion to the character in a seamless manner. Again, this Pinocchio is an inconsistent affair, yet the inherent magic of the story remains, making it worth watching. Streaming on Disney+.

Wilson riveting in difficult Things
Harry Wootliff's True Things is not a movie you watch on a Friday night after having a rough week. It's heavy lifting and, at times, far from pleasant. However, it's a compelling film thanks in large part to Ruth Wilson's devastating performance as Kate, a woman compelled to sabotage herself at every turn. Her behavior at work has her on the verge of getting fired and her involvement with Blonde (Tom Burke), a troubled ex-con, has her friends and parents concerned. There are plenty of warnings, and yet Kate continues down the road to ruin, her self-destructive tendencies getting the better of her.

Again, this can be a tough watch, but it proves to be worthwhile thanks to Wilson's work as well as that of Burke. Though maddening, the actress is still able to garner our sympathy, a vulnerability always lurking beneath Kate's questionable behavior. Meanwhile, Burke brings a palpable sense of danger to Blonde, a malice about him that's frightening. Wootliff employs a sure hand throughout, creating a dingy aesthetic that reflects Kate's muddled mind. Her work and that of her cast makes Things an absorbing cautionary tale that, though hard to take, is equally hard to shake. Available via Video-on-Demand.

Hypocrisy on display in Honk
Adamma Ebo's Honk for Jesus, Save Your Soul, is at times woefully obvious in its intent and message, but that doesn't make it any less effective as it skewers religious hypocrisy and the certainly unholy alliance of big business and spiritual enterprises. Sterling K. Brown and Regina King are Lee-Curtis and Trinitie Childs (Brown and King), and they run the Great Paths Baptist Mega Church. Their empire is threatened when accusations of sexual conduct are leveled against Lee-Curtis and the couple find themselves scrambling to salvage their reputations and fortune.

Hypocrisy rears its ugly head in this stinging satire as the couple's sanctimonious behavior is undercut by their human failings, none of which they want to own. Brown and King are very good, each embracing not only their characters' moments of foolishness, but those of humility as well. While the film is quite funny at times, it's the scenes in which Lee-Curtis and Trinitie face their ultimate reckoning that it finds its power. Like so many Biblical tales, Honk proves to be a powerful cautionary tale, one that speaks to the danger and allure of hubris as well as the salvation that comes in recognizing our own failings. In theaters.