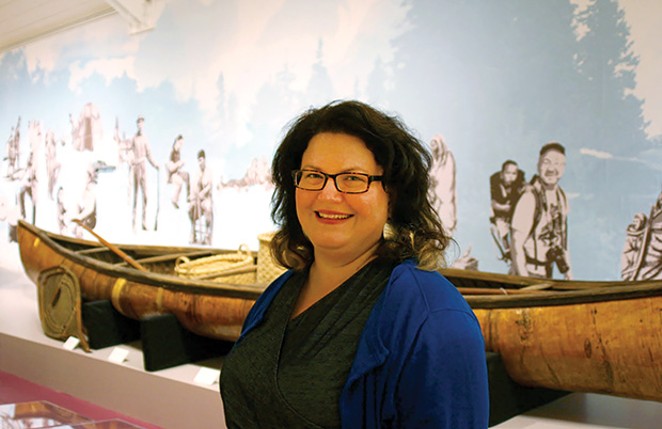 The Illinois State Museum has hired a leader in the museum field to serve as its director.  Cinnamon Catlin-Legutko will assume her new position Sept. 9. She comes to the Illinois State Museum from Bar Harbor, Maine, where she directed the Abbe Museum for a decade. Prior to leading the Abbe as president and CEO, she was director of the General Lew Wallace Study and Museum in Crawfordsville, Indiana, for six years. She is a thought-leader in the museum field on the subjects of diversity and inclusion and a champion for the role of small museums.

Catlin-Legutko has years of experience serving in leadership roles with national and state museum associations and is a frequent speaker at museum conferences.  She has served on the board of directors for the American Alliance of Museums (AAM) since 2015 and is a former board member of the American Association for State and Local History.  Both of these national museum organizations play critical roles in promoting best practices and advocating for museums. AAM recently launched major diversity, equity, accessibility and inclusion initiatives, and this is now a strategic priority for AAM. Catlin-Legutko was deeply involved throughout the process.

“Cinnamon is not only a dynamic and energetic museum leader, she is also a true champion for museums,” said Laura Lott, president and CEO of AAM. As a leader in the museum field, Cinnamon brings a great national perspective to her new position with the Illinois State Museum, a bold vision for museums in the 21st century, critical financial acumen and an authentic spirit of collaboration.”

Catlin-Legutko earned her bachelor’s degree in anthropology and art history from Purdue University and her master’s in anthropology/museum studies from the University of Arkansas. She says she was a traditionally trained cultural anthropologist and has had to learn a new way of thinking. The Abbe Museum, which is the only Smithsonian affiliate in Maine, focuses on the history and cultures of Maine’s native people, the Wabanaki. The museum has grown from a small, trailside, privately operated museum within Acadia National Park to an exciting contemporary museum in downtown Bar Harbor. Catlin-Legutko was the driving force to work with native communities in Maine to ensure collaboration and cooperation with the Wabanaki people. She led the museum’s “decolonization” initiative, an emerging priority in the museum field. Decolonization means museums share authority and governance with native people for the documentation and interpretation of the culture of indigenous peoples. She says she “doesn’t have the authority to determine another person’s narrative.”

“We are very pleased to have Ms. Catlin-Legutko lead the museum as we strive toward greater inclusiveness and expand our service to Illinois citizens and beyond,” said Dr. Lorin Nevling of Monticello, chair of the Illinois State Museum board.  “The board of the museum is eager to work with Director Catlin-Legutko to assure a brilliant future for the museum.”

Catlin-Legutko is also dedicated to how museums can best serve communities.  She served on the board of the Bar Harbor Chamber of Commerce for many years, including a term as chair.  Under her leadership at the General Lew Wallace Study and Museum in Indiana, the museum won the prestigious 2008 National Medal for Museum Service. The award is presented by the Institute of Museum and Library Services to recognize institutions that demonstrate extraordinary and innovative approaches to community service.
The Illinois State Museum is part of the Illinois Department of Natural Resources (IDNR).  “We’re excited to have Cinnamon on board as the new director of the Illinois State Museum,” said Colleen Callahan, IDNR director. “She brings with her a wealth of experience, knowledge and energy, and we can’t wait for her to take the reins.”

There have been two consecutive interim directors of the Illinois State Museum since October 2015 when former Governor Bruce Rauner forced the termination or retirement of the museum director and senior management team and closed the museum to the public for nine months.  The museum reopened in July 2016. Michael Wiant served as the first interim director, and Robert Sill has served as interim director since January 2018, following Wiant’s retirement from the museum.

Catlin-Legutko is looking forward to this next adventure, which she says is an opportunity to stretch her skill set in a larger institution.  As a member of the board of directors of AAM, she says it is exciting to be joining an AAM-accredited museum.  She is delighted to return to the Midwest and be closer to family in Missouri and Arkansas.

With her roots in the Midwest and having worked in Indiana for many years, Catlin-Legutko has long followed the Illinois State Museum.  When the museum was closed, “it sent shock waves through the museum field,” said Catlin-Legutko. Certainly museums have had their share of struggles in states across the country, but she didn’t think it was possible that a state museum could be shut down.  “State museums reflect the identity of a state and are evidence of place,” says Catlin-Legutko.  “What does it mean to people when it’s gone?  We need to make sure there is an understanding of what it means so it doesn’t happen again.”