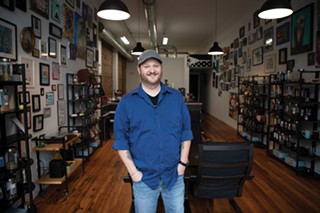 Whimsy Tea began out of frustration. Owner Gordon Davis explained that one of his family's regular outings was to Teavana, formerly housed in White Oaks Mall. Then the company was purchased by Starbucks, which closed the local outlet, despite initial promises to the contrary.

After the disappointment, Davis and his family decided not to let Starbucks dictate their family's access to quality teas, and they began to source their own. The business, created and staffed by Davis, his wife, Laura, and daughter Amberly, with assistance from their younger children as well, began as a stand at the Old Capitol Farmers Market.

Though incremental progress was always the foundation of their business plan, within a month Whimsy Tea was available at Bunn Gourmet, and now the company's teas are available at more than a dozen locations. "We're trying to be everywhere we possibly can," notes Davis.

A push last summer by Downtown Springfield, Inc. to fill first-floor retail spaces gave the Davis family an opportunity they could not resist: a short-term lease. "We were able to try it out and see if it would work," states Davis. "It did well."

When that lease expired, Whimsy Tea moved into a larger space on the other side of Adams and Fourth streets, still right in the thick of the Adams Family business district. "This street is booming. If someone is getting into pursuing their passion, Adams Street is where to do it," says Davis. "We cultivate the unique – that's the great thing about downtown. It's where people go to build their own thing."

Whimsy Tea has also become an art venue. "We partner with local artists and they do label art for us. We can offer our artists wall space for free, and if they choose to sell their art, we don't take a cut. They don't have to pay rent for art space. We have 23 artists, and probably 130 pieces," says Davis.

As for future plans, Davis says, "We always wanted to eventually have a tea house. We're not there yet, but we're getting there. Incremental progress."

NEW BUSINESS NOT DOWNTOWN (OPENED AFTER 8/1/20)