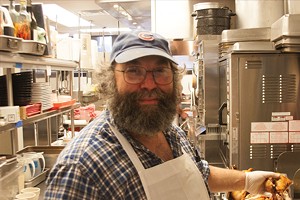 As the story goes, during the Great Depression in Nashville there lived a man named Thornton Prince. He was tall and good-looking. According to his great-niece Andre Prince Jeffries, he was quite the womanizer. “He was totally a ladies’ man. He sure had plenty of women.”

Her chicken had the opposite effect. He loved it. He shared it with his brothers. They loved it. The Prince brothers turned the idea into Prince’s Hot Chicken Shack. Prince’s, now in it’s eighth decade, has spawned other Nashville Hot Chicken establishments, most notably Hattie B’s Hot Chicken and Bolton’s Spicy Chicken and Fish. Hot chicken has become so iconic that Nashville has hosted the Music City Hot Chicken Festival for the past 10 years.

Though Prince’s recipe is a closely guarded secret, it is known that the blistering heat is added after frying. Oil is mixed with a dry spice rub (usually cayenne, paprika and sugar) and is slathered on the chicken as it’s pulled out of the fryer. The chicken is usually served on white bread, which becomes soaked in the cayenne oil, and is topped with hamburger pickles. The heat starts out gentle then builds until your lips tingle.

Open just two months, Watson’s Shack & Rail (named after the late singer/guitarist Doc Watson) is a full-service restaurant and bar, specializing in fried and rotisserie-style chicken, including Nashville-style Hot Chicken. “Delicious chicken, sourced responsibly, priced reasonably” is Watson’s mantra. Sandwiches range from $6 to $8 and dinners including beverage are available for about $15.

PHOTO BY PETER GLATZ
Nashville Hot Chicken as presented by Watson’s.
Nashville Hot Chicken as presented by Watson’s.
PHOTO BY PETER GLATZ
I met Watson’s chef/owner Mark Hartstein last fall when I spent three days working in the kitchen of Urbana’s Prairie Fruits Farm and Creamery helping to prepare a “Dinner on the Farm” menu. Everybody calls him Shades, although I’ve never seen him wear sunglasses. Shades has an outgoing upbeat personality and makes everyone feel appreciated and welcome. He is relaxed, confident and passionate about his cooking.

While Shades was an undergraduate at Boston University majoring in English, he supported himself by working in restaurants. After graduation he moved to Champaign-Urbana to begin a master’s program in English at the University of Illinois. “I was a good student as an undergraduate, but not a very good graduate student.” He gave up on the master’s degree and began a career in cooking in 1992.

He has cooked for many prominent Champaign and Urbana establishments over the past two-plus decades and has created many “pop-up” dining events. Watson’s is his first venture as an owner/chef. He characterizes his menu as “Southern/Appalachian home-style comfort food.”

Watson’s features poultry from a farm in northern Indiana. The chickens are fed an all-vegetable diet, hormone-free and antibiotic-free. Watson’s chicken is prepared fried or spit-roasted. It can be ordered by the piece, as a half or whole bird. The fried chicken is marinated in pickle brine, dredged in spicy flour and fried in non-GMO sunflower oil. The spit-roasted chicken is marinated in a citrusy brine and is seasoned with ancho chile, garlic and oregano. Watson’s also serves fried chicken and waffles with apple spice butter and bourbon syrup.

Side dishes include sweet potatoes with sorghum syrup, pimento mac and cheese, stewed greens with smoked turkey broth, a savory tomato pudding and buttermilk mashed potatoes. Side dish specials will appear on the menu as local produce becomes available.

Watson’s is open from 4 to 10 Tuesday through Saturday, and from 4 to 9 on Sundays. A late-night table snack menu is offered from 10 p.m. to 2 a.m. on Fridays and Saturdays. Live music will be featured during the late-night hours.

Dr. Peter Glatz will be taking off his scrubs and donning his chef jacket on Thursday, April 28, as he helps American Harvest Eatery prepare a special four-course tasting menu featuring the favorite recipes of his late wife and Illinois Times food writer Julianne Glatz. The event will benefit genHkids (Generation Healthy Kids). For reservations, call American Harvest at 546-8300.