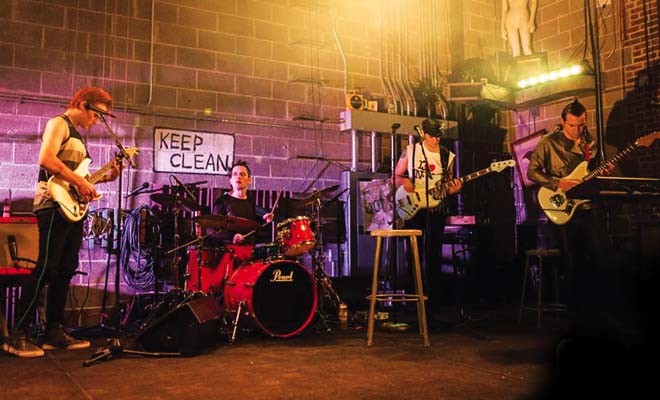 First, let’s send good wishes to our 2014 International Blues Challenge competitors now in Memphis, Tenn., possibly on a stage as you read this. Best of luck to Brooke Thomas and the Blue Suns, Monica Morris with Josie Lowder and Back Pack Jones as they compete with about 250 other blues artists for the grand prize blues award in band and solo/duo categories. More next week on the results or go to the IBC home page at The Blues Foundation for current updates on our participants.

Here’s a young, fun, fairly new combo in town called Ragna Rye playing Bar None on Friday and Craft Beer Bar on Saturday. Formed in late summer of 2013, they promote themselves as “A potent cocktail of 1 part rock ‘n’ roll, 1 part blues. Mix with a little punk rock, a garnish of soul, add whiskey. Shaken, not stirred. Enjoy!” which certainly sounds very tasty to me. They do old blues songs, newer punkish tunes, obscure indie-rock covers, Johnny Cash-influenced numbers and basically have fun, playing good music with an attitude of caring nonchalance.

With Alex Owens on guitar/vocals and Michael LaFrance on drums, they’re playing it as a twosome and sometimes others are involved too, or at least they were when they started out. Whatever the combo and whenever they play, it’s interesting and musical, purposeful and heartfelt, and they say they’re going to debut one of my all-time favorite songs, St. James Infirmary. Heigh-ho!

This could be and likely is, your last opportunity to see one of the most talked about Springfield musical productions in a long while. The Legacy Theatre presents the final six performances of the local version of Hedwig and the Angry Inch this weekend and the next, Thursday through Saturday.

Yes, we love the actors (what terrific work), but being a column mostly about music, we must show our allegiance and brag a bit upon the band. As called by others, the “Masters of Eastern Bloc Rock,” Kyle Tyler Cummings, Nick Murphy, Phil Sgambelluri and Emerson James shine as the Angry Inch, making the show so cool, using a live rock band as part of the whole shebang. Seeing is believing and hearing is too; so go see and hear it. Tickets for each show are $18 in advance or $25 day of show and available at the door, online at http://bit.ly/Hedwig2014 or by calling 1-800-838-3006.

Saturday, from 7 to 11 p.m., the Walnut Street Winery features former Illiopolis and Lincoln resident Erisa Rei, who signed with Creative and Dreams Music Network based in Nashville, Tenn., back in Oct. of 2012. Erisa now resides in Spring Valley, Tenn., and is up for a local show doing what she always does, playing mesmerizing songs in a captivating way.

In a quick look across the Pub Crawl pages I see a whale of a weekend. On Friday, Donnie’s Homespun hosts an Acoustic Music Showcase featuring Lowder and Manning, Dave Littrell, Ryan Bishop, Micah Walk and Elizabeth Eckert, while Rockhouse rocks the Blue Grouch, Roxschool “rox” the Curve Inn, The Antics land at the Koo Koo Nest and the Blue Gs play Norb Andys. Saturday night continues the action with Novocaine at Marly’s, Randy Charles Band at the Butternut Hut, 2 Live Fu at the Blue Grouch and Live Wire at Guitars and Cadillacs.

And there’s plenty more. Feeling like the chill has lifted, at least momentarily?